Menugate may have caused some to forget that last week's vicious LNP attack on the Prime Minister was from Steve 'slit her throat' Ciobo — but not his constituent, Duade Borg. 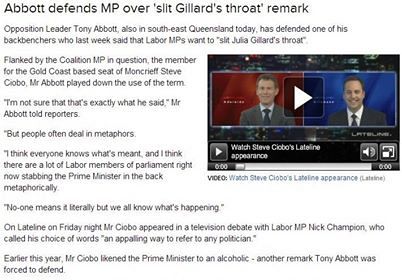 It has been another regretful week in Australian politics, with the revelation on Wednesday that a community fundraiser for the Liberal Party was again home to misogynistic attacks on our Lady Prime Minister.

The menugate saga has once more highlighted the language of vitriol and pattern of behaviour the Liberal Party engages in – sniggering schoolboy antics and childish personal insults – with former Howard government minister Mal Brough, a man embroiled in controversy due to his involvement in the Ashbygate affair, hosting shadow treasurer Joe Hockey at a venue in Brisbane. The dinner menu contained several offensive dishes but the main offender – the Morrocan Quail – has garnered international headlines.

I’m sure they laughed heartily at the expense of the PM and no doubt pat each other on the back with pride. Not only was it sickening, but the premise is old — it is simply a rehashed KFC meme that I first saw doing the rounds on Facebook a couple of years ago.

This is just another one of many examples of Coalition MPs engaging in sexist, aggressive and desperate politics in the absence of clear policy direction of their own.

It certainly isn’t an isolated incident.

I was shocked and in a state of disbelief as I watched last Friday night’s edition of Lateline.

The local Member of Parliament in the electorate I grew up in, went to school in, got my first job in, kissed my first girl in – Moncrieff – was on to have a discussion with South Australian Labor backbencher, Nick Champion.

“Steve Who?” Ciobo inherited the central Gold Coast seat of Moncrieff from Kathy Sullivan in the 2001 election. She was a low-key but much loved MP, being the first woman to serve in both the House and the Senate, and had held the seat since the boundaries were drawn in 1984.

Mr Ciobo has enjoyed 12 years in parliament and is seen as a “future Liberal leader”. He describes himself as a libertarian, getting himself red in the face, proclaiming that Australia is a laughing stock internationally due to over-regulation stifling investment and innovation. He is a friend to poker machines and big tobacco – providing both overt and covert opposition to poker machine reform and plain cigarette packaging – and his coffers are lined by the fabulous wealth of the conservative Gold Coast.

During the interview on Lateline, one of the first things Mr Ciobo claimed was that given the opportunity, Labor MPs would be in a rush to “slit Julia Gillard’s throat”.

This disgusting imagery is more than just a metaphor — it is a carefully plotted and articulated attack on the integrity of Labor and particularly the Prime Minister, who has been under sustained violent and sexist attack for over three years now.

He knew exactly what he was saying. It made my stomach churn. I was outraged.

This comes just a few weeks after his last immature outburst, in which he compared Ms Gillard to an alcoholic, claiming that “every single day she’ll come up with another set of excuses to justify poor behaviour and what’s taken place the previous day”. Another questionable metaphor and such stinging irony from a man who refused to participate in a charity event highlighting dangerous drinking habits if he couldn't get on the turps for Indy.

Mr Ciobo’s sneering and jeering at the Prime Minister, while taking cheap swipes at the serious issues of alcoholism, addiction and mental health tell us a lot about a man who hasn’t met much resistance in his electorate. A man who takes the votes he receives for granted; a megaphone for big business, big smoke, big booze, big gaming.

Tony Abbott made his way to Moncrieff again this week in yet another effort to assure voters that Mr Ciobo’s vulgar comments and his outspoken support for Malcolm Turnbull will not put the Gold Coast on the backburner in Federal politics (although any reasonable observer would note that is where the Gold Coast has always been). Moncrieff is a very safe Liberal seat – they tell you that in primary school over and over to exploit the same psychology that constant poor opinion polls do – and although Mr Ciobo claims his stake on a bounty of "local results", it’s difficult to see his influence in that list.

I could be wrong about Tony Abbott's latest visit to the GC; maybe Mr Abbott caught a whiff that there’s a charming, charismatic, handsome and articulate young local vying for preselection in a progressive party which could make some very strong inroads with policies directly affecting the Gold Coast — after all, Mr Ciobo was also 27 years old when he was first elected.

Mr Ciobo wrote an opinion piece for the ABC in 2011, ‘Is there a legislator in the house?’ where he lamented the days of anarchy, claiming that people should just “harden up”. He calls Australia a “nanny state” and then continues quite audaciously to complain about rules and regulations governing society. He makes yet another insensitive reference to alcoholism and claims that most regulation could be done away with if people had any sense of responsibility.

The comments on his article go much further to reveal his sinister and damaging ideology than I could in this space so I won’t spend much time on it. They also explain why he must be quite reluctant to stick his neck out and say what he really thinks — his views are met with much suspicion and resistance.

He claims personal responsibility is of the utmost importance and that any safety net to stop the rich and powerful taking advantage of the poor and vulnerable, or to compensate someone for loss or injury, is unsavoury.

These are not the rantings of a compassionate man.

He has also resorted to appealing to xenophobia and ignorance while rudely interrupting his opponents, as was witnessed on Lateline. Many of his assertions were hardly qualified and I’m under the impression were spouted purely for sensationalist effect.

At least Emma Alberici didn’t let him get away with his unabashed tripe completely free of scrutiny or scepticism.

EMMA ALBERICI: When and if you come to power, we'll look forward to seeing how you stop those boats, Steve Ciobo.

(Duade Borg is a member of the Australian Sex Party and is vying for pre-selection for the seat of Mocrief for that party.)