As the brutalisation of refugees and barbarity of places like Manus Island becomes obvious, more and more Australians want them brought here, says John Passant.

THE SCENES from Manus Island of innocent refugees and asylum seekers being beaten, handcuffed and forced out of the detention centre are horrifying.

They show that the concentration camp that is Manus Island is truly hell on earth.

For weeks, the Government has tried to starve and dehydrate the men out of one prison camp into other, not-yet prison camps. For them, Manus Island is itself a prison camp. The invasion by troops, police and immigration officials smashed improvised wells, overturned water collection bins, destroyed food, possessions and medications, and arrested leaders like award-winning journalist Behrouz Boochani as part of the attempt to force the heroes of Manus out. They beat the men with steel rods and wooden sticks.

"Our" government has tortured refugees and asylum seekers for many years by isolating them on Manus Island and Nauru. The bipartisan support for the "Pacific Solution" shows the cruel and barbarous side of the politics of Australian capitalism.

The horror of Manus Island should come as no surprise. Australian capitalism has been largely built on hate — a hate that changes over time but is always there. Depending on which period in our history, the object of hate has been Aboriginal and Torres Strait Islanders, the Irish, the Chinese, the Japanese, Asians more generally, non-whites and various religious targets from Catholics, to Jews, to Muslims.

This hate springs from the colonial settler foundations of Australia, which was built on the genocide of Indigenous people. They represent the eternal "other". The Intervention, Don Dale, the Stolen Generations, high Indigenous incarceration rates, ill-health, early death and poverty, and now, camouflaged police armed with assault weapons patrolling the streets of Darwin and Alice Springs, are all examples of this racism.

This hate also has another important aspect, made clear from Marx’s discussion almost 150 years ago of the situation of Irish workers in England.

The ordinary English worker hates the Irish worker as a competitor who lowers his standard of life. In relation to the Irish worker, he regards himself as a member of the ruling nation and consequently he becomes a tool of the English aristocrats and capitalists against Ireland, thus strengthening their domination over himself. He cherishes religious, social, and national prejudices against the Irish worker. His attitude towards him is much the same as that of the “poor whites” to the Negroes in the former slave states of the U.S.A. The Irishman pays him back with interest in his own money. He sees in the English worker both the accomplice and the stupid tool of the English rulers in Ireland.

This antagonism is artificially kept alive and intensified by the press, the pulpit, the comic papers, in short, by all the means at the disposal of the ruling classes. This antagonism is the secret of the impotence of the English working class, despite its organisation. It is the secret by which the capitalist class maintains its power. And the latter is quite aware of this.

Manus Island asylum seeker @BehrouzBoochani disputes the official line from PNG that today's removal of men from the centre was largely voluntary and peaceful.
Via @liamfoxabc @abcnews #ManusIsland pic.twitter.com/CnQWyypN6E

And so it is hate that the likes of Minister for Immigration and Border Protection Dutton and Prime Minister Turnbull spread for refugees and asylum seekers. In doing this, they hope that workers will side with them and vote for the Coalition — not just on the issue of brutalising refugees, but more generally as "Aussies" all together against a common enemy, rather than being divided by class. Workers have more in common with refugees and asylum seekers than they do with merchant bankers and mining magnates.

I believe the recent removal of the men on Manus from the old detention centre to unfinished accommodation in the main city on the Island, Lorengau, was timed to influence the Queensland election and to bolster Dutton’s own re-election chances in any Federal election. Dutton’s Federal seat of Dickson, on 2%, is marginal, so we can expect more – and more brutal – attacks on refugees and asylum seekers until he and the Turnbull Government are thrown out.

The brutal scenes from Manus Island did not seem to work for the Queensland State Opposition either. The LNP in the Queensland election has lost 8% on its primary vote compared to the 2015 election, which was itself down 8% compared to the landslide of Campbell Newman in 2012. Federally, the last Newspoll shows that – for the 23rd poll in a row – the Turnbull Government will be wiped out.

I have argued consistently that the brutalisation of refugees is part of a wider pattern of force that the Government is using, and will use, against "others" here in Australia, including Indigenous Australians, dissidents, welfare recipients and workers. Indeed, they reinforce each other. Bashing others offshore makes it more acceptable to bash others here.

And so it was that at a refugee rally in Melbourne to support the men on Manus, a man believed to be a fascist grabbed the microphone and screamed that "all refugees were rapists". A refugee activist tried to stop him. Police tackled the activist and his head split open as it hit the concrete. Rather than getting an ambulance for him, he was reportedly arrested. The police do not appear to have charged the person who took over the protest platform to derail the protest. 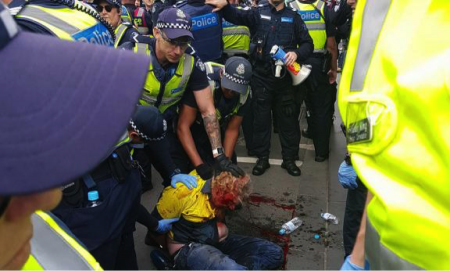 The human rights abuses on Manus Island raise questions for the refugee movement. How do we stop these abuses and bring them here?

Voting Labor won’t change the barbarity of offshore processing. They agree with it. Indeed it was Paul Keating and Gerry Hand who, in 1992, began locking up asylum seekers. Labor has, at times, set in train the inevitable spiral to the bottom of policy and then give the impression of being the soft cop to the Liberals’ hard cop.

We pro-refugee Australians are a minority. However when the barbarity of places like Manus Island becomes obvious, half of Australians surveyed want them brought here. A Politics HQ poll earlier this month after they began their sit-in, found that 80% wanted the men on Manus Island and Nauru evacuated to New Zealand, the U.S. or Australia.

More non-violent democratic actions can win more Australians to our side. The protests in Melbourne which have successfully shut down key intersections, but which police now try to stop, show the way forward.

The time for playing nice is over. The abuse of the men on Manus Island demands mass civil disobedience to defend and protect them and bring them here.