Tony Abbott has offended our veterans and plundered the Treasury through his bumbling, cynical, outmoded and self-indulgent approach to governing, writes senior correspondent Barry Everingham.

Prime Minister Tony Abbott’s constant mantra that the country’s economy is in tatters has been shown for the lying canard it really is.

And as though that isn’t enough, he has come up with another gaffe which indicates just how unsuitable he is to hold the office of Prime Minister.

I have in the past likened him to former conservative Prime Minister Sir William McMahon, who was accident prone but was never taken seriously — except by himself.

McMahon would never drag war heroes into a political debate and it is to Abbott’s undying shame that he is so out of touch with political reality that he has chosen to do so.

It needs to be asked, just who does Abbott take advice from or does he just have a thought bubble and run with it?

When speaking of survivors of a WWII iconic battle, it is disgraceful that Abbott brushed that aside to push a crass ideological message about a budget ridiculed by the vast majority of Australians, which has little or no hope of being passed by the Senate.

Carbon and mining taxes, being "open for business" and meeting U.S. officials with business leaders — what in God's name have they got to do with celebrating the 70th anniversary of D-Day or expressing gratitude for our war heroes?

With that in mind, it was revealed over the weekend that $150,000 has been wasted on a two days visit to Australia by the fun loving Prince Harry a grandson of the absent head of state.

Now, this young man, who is Prince William’s only brother, has little or no relevance to this country whatsoever.

When Harry springs to mind, most people probably remember when he donned a Nazi uniform for a party or was photographed nude in Las Vegas.

In the event of William’s death, Harry slips down the line of succession, since the birth of baby George and, as it is highly unlikely either William or George will ever be our heads of state, it makes Harry’s situation in the Australian context even more bizarre.

One was to watch the International Fleet Review, which celebrated 100 years of the “Royal” Australian Navy.

The second was to meet SAS troops in Perth.

The third, interestingly enough, was to meet Abbott’s daughters at Kirribilli House and have some photographs taken.

Now Abbott’s Department (PM&C) was being coy about the breakdown of this outrageous waste of money in Senate Estimates, but was able say the funds included “broad categories of costs” — there is a Sir Humphrey Appleby in Canberra, after all.

It appears the items paid for included water ground and air transport and accommodation, and “other visit related costs”.

Taxpayers need to know what those other costs covered — indeed we should demand to know.

(Memo to the new Senators taking their places in July: get on to this one as matter of urgency.)

It needs to be revealed what present he was given for being here and, even more important, did we – as tradition demands – pay for the present(s) he gave us for having invited him here.

Abbott’s obsession with the royals will cost the taxpayer dearly in the time he has left in the top job. We are still waiting to be the reasons for William’s and Kate’s folly in the Antipodes cost and it is chilling to anticipate there will be many more to come.

But Abbott blotted his copy book with Buckingham Palace and Yarralumla over his unilateral and bizarre decision to reinstate outmoded and irrelevant tiles in the Order of Australia.

So who forgot to get a signed Letters Patent to make #KnightsandDames legal and official? #TimestampErrorMark2 pic.twitter.com/SKETvVDFvy

Indeed, former Governor-General Ms Quentin Bryce heard of her “elevation” on the ABC 8.30 radio news and the Queen heard from an aide who was contacted by a member of the Australian media.

It is telling that, since General Peter Cosgrove has assumed the governor-generalship, there has been a wall of silence from Yarralumla.

Ever the control freak, it is understand Abbott needs to approve every vice regal outing and speech before Cosgrove can go to work.

Not content with patronising Ms Bryce and the Queen, Abbott has placed one of our most distinguished soldiers in his sights.

Harry of Wales is the first in a long line of Windsors whom we can expect to plunder our Treasury to satisfy the last century whims of Tony Abbott, a real man of yesterday who lacks a vision for tomorrow.

Apparently, Harry was so impressed with the welcome he received he reporters before nurturing to London that he was looking forward to coming back again.

Really? At what cost?

BREAKING: Tony Abbott says without the crippling impost of the carbon tax, WW2 would have been over by June 1943. 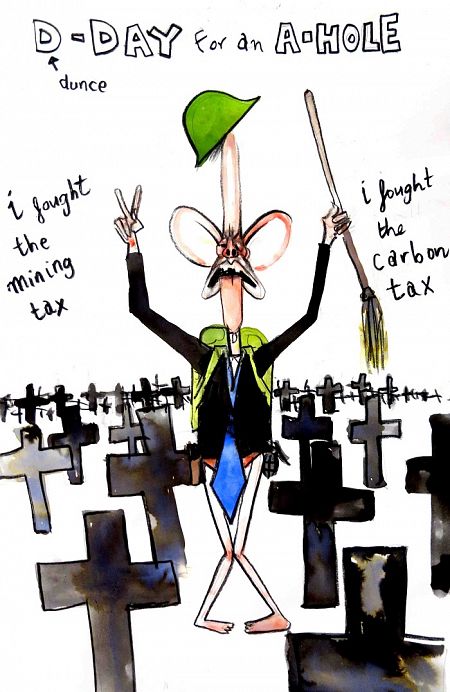