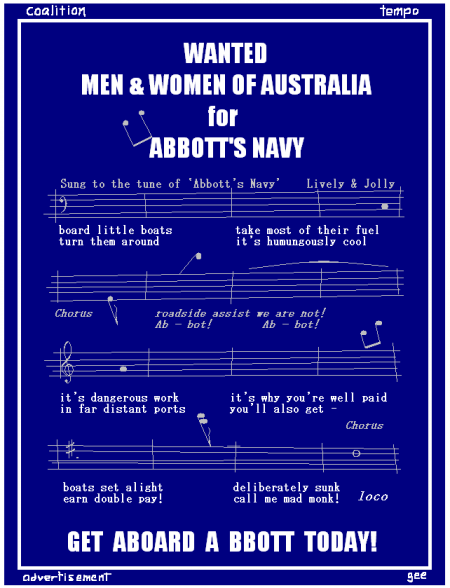 IF EVER Australians needed a reason not to vote for a Government led by Tony Abbott, the Opposition Leader’s performance with Barrie Cassidy on the ABC’s Insiders program on Sunday morning was reason enough.

Abbott was cold to the point of cruel, humourless and stiff, and his eyes said it all.

When he remarked that Australian sailors knew they had to do things they didn’t like to protect their country, a visible sigh of disbelief surely was heard around the land.  Now I, along with others, have been saying for some time that every time an asylum seeker –man, woman or child – is drowned in their effort to make a better life here, Abbott would be delighted. Anything below the belt is good enough for him if it gets his message across.

Now, it seems, the precious lives of Australian servicemen and women are expendable as well.

Surely Abbott heeded the words of former Navy and Army top brass when they warned about towing boats back to Indonesia?

And his smirking non-answer to Cassidy’s question, asking if he had told this to the Indonesian President when they met in Darwin last Friday was another indication of the duplicity of this man.

I don’t make public what was said in a private meeting, said Abbott, or words to that effect.

Come on, I have my contacts — you didn’t, did you?

Well, I have mine as well and I can tell you definitively — Abbott did not have the guts to raise the matter with the Indonesians at that meeting.

Julia Gillard would have had her own sources of what was and what wasn’t said during the meeting and that’s why I’m sure she went for jugular by branding him a “coward”.

The Liberals are just plain crazy sticking with Abbott — a rough pugilist with absolutely nothing to recommend him.

Melbourne’s august broadsheet The Age published a devastating piece on Abbott in the Saturday edition of the paper, pointing out that he has adopted propaganda techniques used by Adolf Hitler when he wanted to get a message across.

There is a story elsewhere on this site with more details about that exposé — for that is precisely what it was.

In even thinking of turning back the boats Abbott is displaying a real lack of compassion for his fellow human beings including the gallant men and women of our armed services.

Every time this man sinks as low as he did last weekend, why are we surprised he still finds room for another gutter to sink even lower into!

God only knows what the country will get from him this week.

Malcolm Turnbull is the man the Liberals need.

He is the man the country needs.

Because if Abbott gets the keys to The Lodge, we will sink into a disgraceful morass of extreme right-wing cruelty reminiscent of a dark time in world history.

And Abbott will start, as that other did, with the marginalised and the most vulnerable. 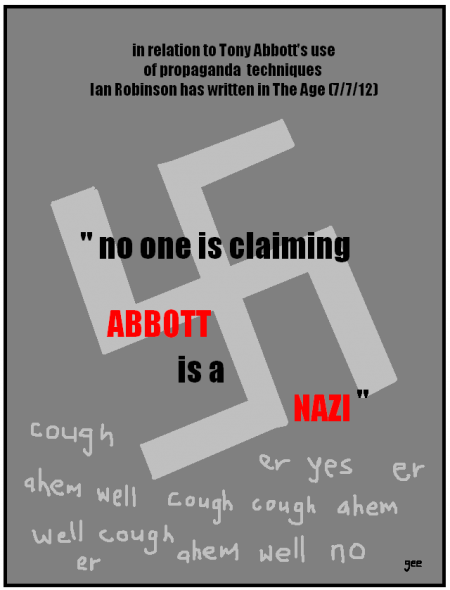