John Haly writes an open letter to John Howard, calling out the former PM on his recent dismissive comments about the Safe School initiative and the same sex marriage bill.

I noted that on the eve of the Sydney Gay and Lesbian Mardi Gras parade and Labor’s renewed efforts on gay marriage you have responded with something old and something new and, I think, introduced a little blue.

The “new” is the opposition frontbencher Terri Butler’s attempt to reintroduce a cross-party same-sex marriage bill back into parliament. The “old” is the now nearly three-year-old Safe Schools program. And the “blue” is simply how others and I feel about it all.

You told Sky News that you are “totally baffled” by the Safe Schools program.

What is baffling to me is your puzzlement. Mr Howard, you say you see a need for anti-bullying policies but then are puzzled by the social agenda that pursues a significant cause for bullying.

You went on to say,

“I’m just puzzled that it got there in the first place.”

Is the fact that it has successfully served to reduce bullying of LGTBI people in schools somehow offensive? Urging for “better ways to do it” despite it having been a success over the last few years but providing no suggestions or insight into how you might have produced better results, is really just empty rhetoric. In the absence of any viable alternative, just what is wrong with such successful advocacy?

Following your concern that the Safe School’s opponents were being labelled as bigots or a homophobes, it was reported:

You said that Australia is at risk of becoming too politically correct and that religious conservatives are less likely to speak their minds due to a fear of being persecuted.

Religious conservatives are being “persecuted”? Pitchforks and burning torches at dusk, John? Really? I think the term you are struggling to identify is “criticised”, “disparaged” perhaps, “rebuked” even — but not “persecuted”. Not assaulted, picked on, belittled or attacked physically, either. That is what the Safe School program is trying to prevent. Having conservatives play the victim is ironic, given it is that community that is doing the bullying.

Unlike the many stories LGBTI children and adults can testify to, nobody is attempting to beat up your white conservative religious mates because you’ve expressed preferences for someone of the opposite sex or want to remain your current gender. Nobody is taunting you or attacking your children behind the school’s darker corners because you or your family are conservative heterosexuals.

Let’s be clear — you are being criticised and critiqued, not persecuted or punished. The Safe School’s site is about protecting people from being persecuted – in the proper use of the word – or punished for their non-conformance to mainstream sexual and gender preferences.

For you or Cory Bernardi to be reversing that and suggesting the far stronger majority of hetrosexuals and conservatives are being persecuted or bullied by this site or its adherents is just absurd. Cory Bernardi even went as far as to suggest it was pushing a sexual agenda. For political proponents opposed to the Safe School initiative, who spent $244 million on a chaplain’s advocacy program, to accuse an $8 million program of advocating an agenda is perhaps a little rich. Given the Safe School’s track record of saving lives, you’d think that it is something worth advocating. It’s not about their sexual agenda, it’s about advocating for protection against the particularly vicious way some of your supporters “protect” your conservative sexual agenda.

The accusations by Bernadi and Christensen don’t stop there, as they also suggest it is providing links to pornography and grooming of children. If that were even remotely the case, such criminal activity should be reported to the federal police. One woman in the comments of the aforementioned Buzzfeed article said of the Safe Schools Program: 'its content and the links it provides are very disturbing'. The unanswered challenge was a reply that asked, 'Cite your sources. What about it, exactly, is “inappropriate"?' Just where is this grooming and pornography occurring on the website links? No answer has been forthcoming but that doesn’t stop the objections becoming consistently mired in unsubstantiated opinions that have become substitution for facts. Unsubstatiated claims, that if even remotely true, would constitute criminal activity.

I noted, Mr Howard, following disparaging the Safe Schools program, you went on to talk about marriage equality.

While admitting it ought to be the subject of a free vote in parliament, you expressed support for the promised plebiscite. Given that in 2004 you had the Marriage Act changed to specifically exclude same-sex marriage, one might think for a moment you were softening your stance.

Not so, though! You did make it very clear that people who make a stand against marriage equality should not be called homophobes or bigoted just because they hold a conservative view that marriage was (and I am paraphrasing here) the restrictive right of people who preferred the opposite sex to the exclusion of all other options.

While couching it in terms of the “traditiona"l definition of marriage, you did admit it is no longer a widely held view. That would be because 72 per cent of the population is known to be a majority. If the Liberal Party won the 2013 vote by 53.5 per cent (of which only 45.55 per cent were first preference votes) in 2013 and Abbott pronounces loudly his “mandate” – as he did on numerous occasions – then imagine what he would think if he had 72 per cent of the population on his side — the percentage of people polls indicate as “equality” believers, which you said, is a recent phenomenon.

Considering that only 5.8 million people voted for the Coalition in 2013 and 7.1 million voted for someone else, the perspective that considers that a mandate exists, has to be one that ignores the concept of a national population’s perspective and only considers it in terms of electoral boundaries and preferences.

The problem is, that a plebiscite – as desired by the Coalition – does not see Australia in terms of its electoral boundaries nor in terms of preferences but as a first-past-the-post vote. From that perspective there is neither a mandate for conservative views on marriage equality nor any likely possibility of winning an argument via a plebiscite. The Coalition then, holds the view that marriage and its legal protections and recognition of couples should be the exclusive domain of a subset of the community — no matter how large that subset is. Even if the polls are out of kilter with the community by a few percent here or there, it would have to be wrong to a margin of error of more than 22 per cent, for the conservative view to win.

Since a plebiscite is not legally binding on any government and it is only being proposed as a consideration following the next election, then the only reasons for raising it as a possibility appear to be: 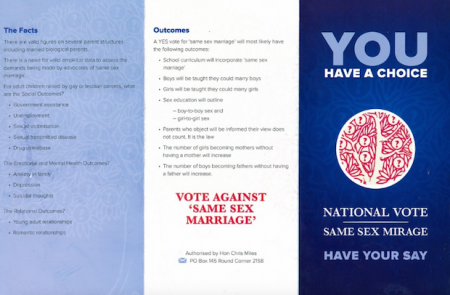 One side of the anti-gay pamphlet authorised by Chris Miles.

So how could your colleagues begin to hope to change over a fifth of the population’s mindset? By communicating a transparent argument with integrity or via misdirection and misinformation? There is no more classic an example of the latter than the latest pamphlet that has hit the headlines, and which which former Liberal MP Chris Miles plans to distribute.

A fascinating document full of off point accusations and broad stroke claims of how it will disintegrate the social fabric of Australia. It accuses the same sex marriage agenda of increasing unemployment, STDs, family anxiety, depression, suicide, single parenthood and drug abuse and that it would lead to “education” in schools on LGBTI issues — which is actually the Safe School’s agenda not the marriage equality agenda.

The impediment to the recognition of gay marriage in Australia is five unique words in the Marriage Act. The words “two people” will replace the words “man and woman” and “husband and wife” so that the Act then reads:

the union of twopeople to the exclusion of all others, voluntarily entered into for life.

It is a legal recognition of a civil union between two people. All the rest of the palaver is just that. It’s a distraction and a fabrication. It doesn’t change the church or require them to do anything they are uncomfortable with as it is about legal unions not church unions. I dare say very few LGTBI couples will even want to be married in a church. 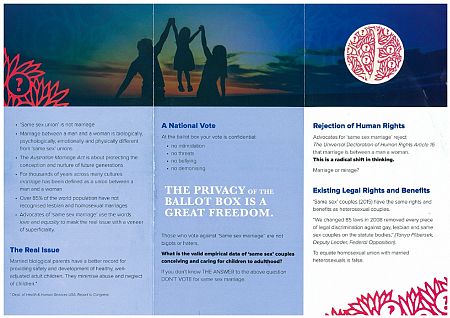 Other side of the anti-gay pamphlet authorised by Chris Miles.

As for the rest of Chris Miles’ pamphlet, I have to wonder how the author of this even came to these conclusions. In reality, it will probably increase employment. It will provide a boost to the wedding, retail and tourism industry. Seriously, the gay community is over the top when it comes to celebrations. Just stop by the Gay Mardi Gras and you’ll note that. Money galore to be made in gay marriage. It provides joy and family enrichment for the couple concerned. It provides for children that may be later introduced (if they don’t already exist), with two parents rather than a single one. Good relationships reduce suicide, depression and drug use. It will increase love and equality. Although, according to the aforementioned pamphlet, apparently issues like love and equality are 'veneers of superficiality'.  Really Chris?

Look, Mr Howard, I get that you don’t like advocacy for LGBTI kids and adults and you don’t understand same sex attraction. You and Jannette are very happy. Good on you! That’s your thing and, I’m sorry, but nobody is persecuting you over it. Last I looked, this country still had some resemblance to a democracy. The majority of that democracy thinks it’s a fair thing that people should love whomever they want and that we should legally recognise that.

Why are you really opposed to a fair go for everyone in this country? The reasons you or your conservative colleagues have given, don’t stand up to scrutiny. None of the countries that have recognised marriage equality, have demonstrated any of the outcomes of which you seem afraid. All that is happening is LGBTI people are being married and real persecution is being reduced. Canada made their ruling over a decade ago and hasn’t reported any of the consequences raised by the pamphlet being touted by Chris Miles!

Given that you have so many countries to draw on for evidence of societal breakdown – which doesn’t exist – and nothing other than misrepresentations as an argument, how can you legitimately hold the position you do? Can you understand why some of us really feel that the only reason left standing, is that of bigotry or homophobia?

Gay marriage: Why it’s better to be a U.S. Republican than an Australian Liberal, by @GerardMay5 http://t.co/htIpt9tvah