It doesn’t matter if Kevin Rudd wins the vote on Monday or not, someone other than the talented Julia Gillard will lead Labor into the next election, says Benjamin Thomas Jones. 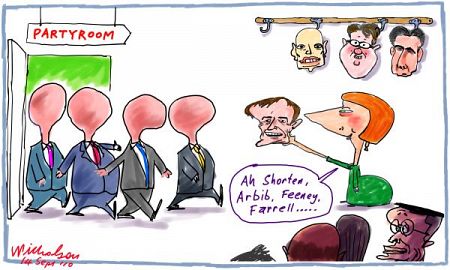 Mosaic law contends that the sins of the father shall be visited upon the son.

In the travelling circus known as the Australian Labor Party, it seems that the sins of the Right faction – ironically known as Labor Unity – have been visited a thousand times on Julia Gillard. It doesn’t matter if the Prime Minster wins the leadership spill on Monday — she is now officially a sitting duck. If not Kevin Rudd, then someone else – anyone else – will lead the ALP to the next election.

Why has this all happened?

Julia Gillard’s prime ministership should have been a feather in the ALP’s cap. It should have been a landmark occasion for all Australians as we celebrate our first female national leader. Gillard had all the right qualities to be Australia’s answer to Elisabeth Kopp, Mary Robinson, Chandrika Kumaratunga or Megawati Sukarnoputri. Cool under pressure, committed to education and the working class, endorsed by Emily’s List — all the ingredients were there to create a cult hero for progressive politics in Australia.

Her achievements in office are numerous. Her masterful ability to negotiate has seen her hold together the most fragmented Australian parliament since World War II. Despite governing with the tenuous support of a Greens MP, two nominally conservative Independents and a Liberal in the Speaker’s Chair, under Gillard’s leadership the ALP has been extremely productive, often succeeding in policy areas where Rudd failed. None of these achievements have made any headway with a disillusioned and impatient electorate. The toxic way in which Gillard gained the leadership has neither been forgotten nor forgiven.

There is a long standing tradition in both major parties that you can never challenge a new MP for their seat before their second term and you cannot touch a minister. Even the ambitious young head-kickers in the far-right of the Liberal Party adhere to this and won’t seek pre-selection against a back-bencher in their first term. It is beyond scandalous that an election winning Prime Minister was rolled in his first term after ending nearly 12 years of conservative rule. The factional war lords in Labor Unity committed an act of hubris and it has followed poor Julia every second of every day. In particular, Mark Arbib and Bill Shorten flexed the Right’s muscles and both were rewarded with cabinet positions.

Conventional wisdom says do not cut your nose to spite your face and yet the ‘faceless men’ of the ALP have somehow managed to do this (remarkable for people who have no face). Labor Unity achieved their short term goal but they have poisoned Gillard’s prime ministership. The Socialist Left faction has sniffed blood and are preparing for the return of Rudd. Doug Cameron, a powerbroker for the Left, has come out for Rudd, as has Robert McClelland and Kim Carr. The undecided back-benchers will likely follow suit. Corangamite MP Darran Cheeseman has already called for Gillard’s resignation. Many of the back-benchers rode to office on the back of Rudd’s popularity. Now, desperate to keep their jobs, they will look again to the most popular Labor MP.

The facts remain stubbornly clear in the public’s mind. What happened to Kevin Rudd was wrong. Of course, we do not have a US style presidential system and we pride ourselves in Australia on voting for party and policy, not personality. Be that as it may, the Kevin 07 campaign saw a landmark victory against a four-term winning Liberal leader. The people rightly expected Rudd to serve his first term. The Australian people have never even denied a new Prime Minister a second term. In that sense, we really do believe in a fair go.

Gillard is, rightly or wrongly, facing the consequences of low politics from Labor Unity. The resurrection of Rudd just goes to show, the public do have a long memory on certain things and you cannot simply hope the passage of time will sweep political dirt under the rug. Kevin Rudd is the only Labor leader in the past 17 years to win government for the ALP in its own right. He is the only person who can stop the Australian people reluctantly voting for the dismally unqualified Opposition Leader, Tony Abbott.  Rudd never should have been dumped and it is now painfully clear that the Labor Right got it horribly wrong.

(You can read more of Benjamin Thomas Jones’ writing on his website Thematic Musings.)