The Coalition Government needs to be stepping up and spending, not cutting interest rates — as everyone in the know knows, says Dr Steven Hail.

ON THE FIRST Tuesday of every month (except January, when they are all off on their holidays) the governor of the Reserve Bank of Australia (RBA) meets with the deputy governor, the Treasury secretary and six other worthies (all appointed by the government) to decide what to do about something called "the cash rate".

It’s been a long time since they last raised it and, instead, since 2011, there has been a long series of cuts to an all-time low, in a forlorn attempt to get us all to spend a bit more. 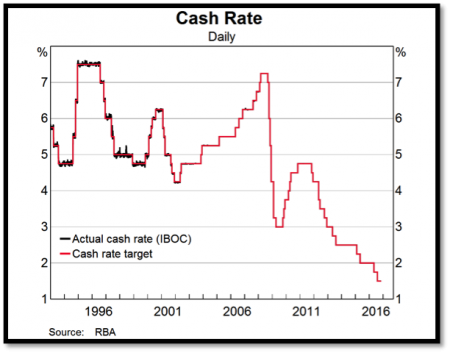 Every month, the RBA board has been torn between a temptation to cut even further and an urge to leave the cash rate where it is. On the one hand, they need us all to borrow more, but on the other hand they are worried about us having too much debt already. What’s more, they are scared that one day the cash rate will reach zero and uncertain about what that will mean. It is all a terrible muddle. 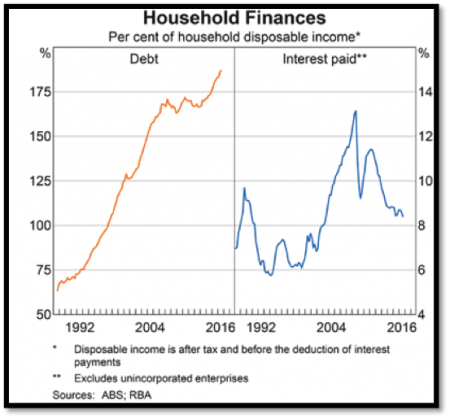 The economy hasn’t been growing quickly enough to provide enough full time jobs for people and there seems to be no risk of runaway inflation any time soon. Everyone knows that really the government ought to be spending rather more than it has been doing and not matching this spending with higher taxes. But nobody is allowed to say this. It would contradict what Scott Morrison, Malcolm Turnbull, Joe Hockey, Tony Abbott, Uncle Tom Cobley and all have been saying for years now about "balancing the budget" and "living within our means". They have backed themselves into a corner. It has all been political machismo. There is no budget emergency and there never has been.

And all this machismo is damaging the country.

The politicians would like the RBA to keep cutting in the hope that this will help, but there is nothing useful the RBA can do. They are out of bullets. Interest rates are already close to zero and although several other central banks have shown in recent years that zero isn’t a boundary you can’t cross – and have introduced negative interest rates for the first time in history – that hasn’t been a great success. It seems that the private sector, and in particular households, are up to their necks in debt and don’t want to borrow much more. Interest rate cuts are at most a very short-term sugar hit. The drug doesn’t work anymore. It might even further weaken the patient. 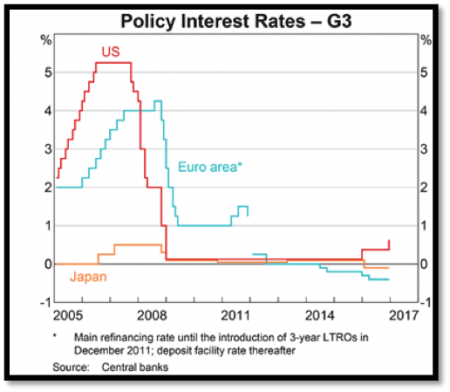 What is this thing called the "cash rate"? Just as you and I have deposits at our banks, so the banks themselves have reserve accounts at the RBA. The way our system works at the moment, the cash rate is the rate of interest at which the banks – the ANZ, Westpac, and so on – lend to and borrow from each other the digital "cash" they hold at the RBA. These reserves are used to deal with the millions of transactions that take place every day between account holders at the different banks. In the run of things, on any particular day, some banks will gain reserves and others will lose them as a result of all this activity. It is normal for a bank with excess reserves at the end of the day to lend those reserves to a bank which is running short. This happens at the "cash rate".

In principle, the cash rate is supposed to be determined by the private banks themselves — in other words, in the money market. In practice, in recent years, the banks have always used the RBA’s target rate. The RBA, in return, makes sure that the total supply of reserves in the system is exactly what the banks need. The way they do this is a little bit more complicated these days than it used to be (involving things called "repos") but the textbook story of the RBA buying government bonds from the private sector when it needs to feed cash into bank reserves and selling bonds when there is too much cash in the system, is still essentially accurate.

If there was too much cash in the system, the cash rate would fall below the RBA’s target; if there was a shortage of cash, it would rise above the target. To control the cash rate, the RBA has to make sure banks have just the right amount of cash in their reserve accounts. It is all a bit "Goldilocks" but the RBA and the banks are in constant touch and the system works pretty well. So much so that all the RBA board has to do is to announce a change in its target for the cash rate on a Tuesday and, as if by magic, the cash rate used by banks automatically changes the following night. The RBA doesn’t have to do anything, except make the announcement. The banks then automatically fall into line with its wishes, as long as the supply of cash into their reserve accounts is "not too hot and not too cold but just right".

That’s the story, really — simplified a bit. The cash rate is the key interest rate in our financial system. Short term rates are linked to it very closely. Long term rates, like those on fixed-rate mortgages, depend largely on what banks expect to happen to the cash rate in the future. 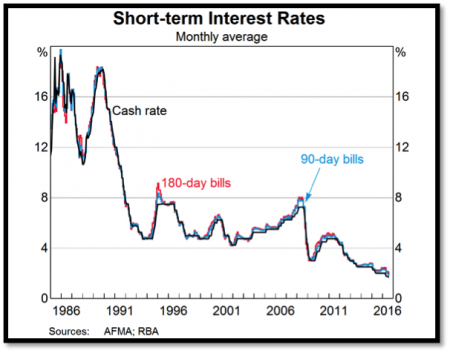 There is only one problem with all this, as we said. Using the cash rate to manage total spending and inflation doesn’t work anymore. Household debt has trebled since the 1990s. People can’t or won’t borrow ever more, whatever the interest rate. What’s more, for everyone with a mortgage who benefits from a lower mortgage rate, there is a saver who loses out on a term deposit. The low interest rate drug doesn’t work anymore. To the extent it ever did, it did so by loading the private sector up with more and more debt, and making our financial system increasingly fragile.

The rate of interest, as a tool for pushing the economy forward, appears to be kaput!

Everyone in the know knows — but they don’t dare say anything. Remember the machismo: they have painted themselves into a very awkward corner. Nobody wants to appear irresponsible, so nobody takes responsibility.

It is all a terrible muddle. And meanwhile, the threat of a property bubble is still hanging over us. Good luck, Australia. You are going to need it.

IF PAUL DALES IS RIGHT the Reserve Bank will cut the official cash rate to 1 per cent later this year.