Ratsinger's resignation spells the end for the Mad Monk 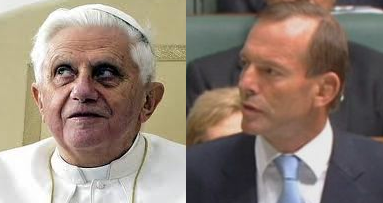 [EDITORS NOTE: The author's strong views about the Catholic Church are expressed here. Please do not read this piece if your religious sensibilities are easily offended.]

THE POPE RESIGNING hurts immeasurably his Church, and imperils Abbott, Pyne, Hockey, Turnbull and Rudd, who believe he was divinely chosen; how can he have been?

‘Lord, let this Cup pass from me,’ Jesus prayed in Gethsemane, yet his Father would not. ‘No way,’ He said, ‘I’m saving that for Benedict the Seventeenth.’

How long can this fool Christ-eating cult survive?

How long can it bugger boys, force little girls to fellate, evade imprisonment, speak of ‘reconciliation’ with teen suicides, now allegedly frying in Hell, forbid contraception, rob the poor to buy rich jewels, hail a virgin with five children, burn Tyndale, shackle Galileo and assert the world is round and get away with it?

There will be a black Pope by April Fool’s Day, and a white one emeritus, and up on a charge of concealing pederasty in Bavaria and maybe, just maybe, practising it.

In politics, this kind of resignation usually means a coming scandal foreboded and concealed: I want to spend more time with my butler; I want to go home to Bavaria, sweet nest of my life in the Hitler Youth. Nah, we say in politics — he’s a crook, he’s been sprung, like Obeid, and he’s running for his life.

Abbott faces today his primal test: what is he to say of this jewelled, sibilant Ratsinger who has tipped him in it? Will he say it was God’s will or God’s Vicar’s mutinous apostasy? Either way he will look a damn fool, and all of his life thus far, from his adoration of Santamaria and his teenage cuckolding and abandoned bride and babe to his attempted banning of the morning-after Pill, to be a cruel farce.

What is to be his utterance?

Will he say, like Hamlet, ‘O what a rogue and peasant slave am I!’? Or, like Humphrey, ‘Very courageous, Pontiff.’

Either way he is finished.

You wait and see.