After his latest absurd decision to knight Prince Philip, the political destruction of Tony Abbott in the coming months is almost a certainty, writes Michael Galvin.

Within hours of Abbott making the Queen's husband a knight, some online media polls were showing 90% of people thought the whole idea was so ridiculous it must be some kind of pathetic joke.

Which it is, of course. But no joke Abbott plays is without an element of malice and this one is no different. It is a calculated insult, with more than one loser. In this case, it appals me that attention has been be taken away from those far more deserving Australians who gained Order of Australia awards — people like Rosemary Crowley from South Australia, for instance.

Most politicians – indeed, most people – would be alarmed and challenged by such a reaction to their behaviour. But not Abbott. He delights in being in an iconoclastic and beleaguered minority. He is as incapable of caring about the ridicule of the majority as an ISIS terrorist is of caring about what others think of the morality of beheading innocent hostages. Indeed, such ridicule validates and affirms his sense of self-identity. Like Evelyn Waugh, even if Waugh could not conceive of this weird bunyip caricature of himself, Abbott delights in being out of step with the mores of his times.

Nevertheless, he can still count. And he is rat-cunning enough to know his support is slipping where it counts — inside the party room.

And so it has begun. After 15 months of the Abbott horror show, the MSM is now regularly criticising Abbott, and a kind of ritual has emerged since Christmas:

It is interesting that the online comments supporting Abbott have dropped right off in recent months. I would estimate the ratio of anti to pro Abbott comments in such (non-Murdoch) MSM forums is now about 9:1. And the comments that convey extreme distaste and contempt for the man make up an increasing proportion of that 90%. 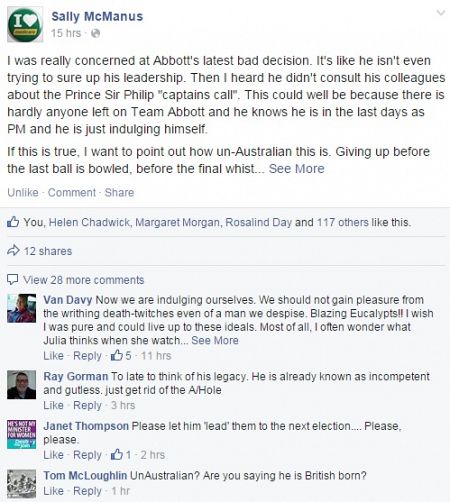 So what happens now? How long can the situation continue where a political leader is relentlessly ridiculed and dismissed as a fool? And how long is it until many people simply tire of abusing him and turn off?

In recent days, I think this criticism fatigue is starting to set in. Will the point be reached when people are no longer angry at Abbott, rather, they are just tired of him? Where they have reached the point where they just want Abbott to go away, to disappear, to be out of their face? There must be a limit to how often someone can summon the energy to say that Abbott has hit a new low.

But Abbott Agonistes is no ordinary politician. He will not suffer through this long, slow crucifixion like Rudd and Gillard did, albeit in their different ways.

It is conceivable, on some bizarre level, that he will actually enjoy it. As outlined above, and unlike most mature people, Abbott will never be able to see that it is his fault. When he departs the political scene, it will be the public that did not live up to his expectations, not the other way round. It will be just as he blamed the faults of the Church for leaving the priesthood — the church let him down, he wasn't the problem. Isolation vindicates him; general consensus unnerves him.

The political destruction of Abbott in the coming months is much to be hoped for and almost a certainty. But because he is like no ordinary politician, it will be a fascinating and very unique spectacle to watch. But at this stage of the process, before he departs the scene, three points can be made.

Firstly, Abbott has damaged the fabric of our society. His behaviour towards Julia Gillard was full of contempt, cruelty and hatred. And deliberate lies. Many people were also hurt or offended by him, not as individuals but as supporters of hers, or as ordinary people trying to be decent citizens. The anger coming out now at Abbott is a sign of just how damaging he was – and how many people felt its effects – even if not fully aware at the time of how hurtful it was to them personally.

Abbott's ascensiuon to the top job was built on hatred, say Michael Galvin.

Secondly, admiration for competent government during 2007-2013 can only increase. The Federal Government held together during those years, despite its own enormous internal tensions and relentless attacks from Abbott and co. Under circumstances far less difficult, Abbott's Government has been spectacularly inept and incompetent by comparison.

Thirdly, admiration for Julia Gillard personally can only increase. Unlike Abbott, she must have felt every stinging blow. To say that she showed grace under pressure is the understatement of the century, and more obvious by the day.

It takes a certain skill to make people cringe about being Australian on Australia Day.

@JohnGrahamArt's touching tribute to Tony Abbott: 'like a seagull, he soared over the sun'. http://t.co/YV6DfZKOqD pic.twitter.com/QYpOQtjway

ScoMo bites dog! Read all about it in Niki Savva's new book

16 February 2022, 3:00pm After his Religious Discrimination Bill was defeated, Scott Morrison has taken a ...
Join the conversation
comments powered by Disqus
News updates