Prime Ministerial deck chairs: What the hell is going on in Australia?

It wasn't Turnbull or Shorten who unseated Abbott as PM, it was the community's stand against his rotten, neoliberal policies. We need to get back to the streets and send the same message to fight Turnbull’s neoliberalism, says John Passant.

IN THE last five years, the prime ministership in Australia has changed once because of an election and three times because the party has replaced the leader.

It is an interesting time line.

What is going on? Why all this turmoil at the top?

As Peter Jones argues in Solidarity magazine, Australia’s economy had for the decade until 2011 been booming. Since then, more or less, it has been slowing down with the end of the mining boom. The further slow down in China recently could send Australia into recession.

Abbott won the election in 2013 promising little substantive change – “no cuts to education, no cuts to health, no change to pensions, no change to the GST and no cuts to the ABC or SBS” – other than a return to “good” government.

The reality is the Liberals did not win in 2013 because they wowed us with new compassionate policies and a caring vision, or indeed any policies or vision. Rather Labor lost, in part because some of its working class supporters had had enough of the ongoing shift of wealth from them to capital and in part because sections of the compassionate middle class continued their move to the Greens. The constant infighting between Rudd and Gillard exacerbated the problem, as did the lack of legitimacy hanging over Gillard’s head in the way she assumed office from a man many Australians liked and then for her no carbon tax promise, which she broke after the 2010 election.

So why the Gillard/Rudd civil war? It wasn’t some left versus right fight. Gillard was nominally from the ALP left but that was more about easing her way up the greasy pole than anything ideological or principled. Rudd was unaligned and so had no support base, other than his seeming winning manner with voters.

There is something else in all of this. How could the Labor Party throw up as leaders people of the calibre of Rudd, Gillard, and now Shorten, people whose only commitment seems to be to ego and capital?

As I have written before, the trajectory of the ALP over the last 30 or so years has been from capitalist workers’ party to CAPITALIST workers’ party on the way to being a capitalist party. This trend has two parents — the logic of managing capitalism in a period of global crises, and, paradoxically, the influence of the trade union bureaucracy in the Party and in the working class. This latter produced the Accord, a document of class collaboration whose ultimate gift is Bill Shorten and the rest of the motley crew. It is why there is no, and will be no, Jeremy Corbyn in the ALP.

The results of the Accord have been a centralised but weakened trade union movement, a desperate search for relevance and continued existence through further class collaboration and a massive drop in strikes from about 2500 hours “lost” per 1000 employees in 1974 to around ten a year or so ago and less than 50 today.

It is one of the reasons why the share of national factor income going to labour is at near record lows and that to capital at record highs.

This lack of class combativeness has also been one of the major contributors to the degeneration of the ALP and it becoming a mouthpiece for neoliberalism. So instead of representing different ideologies debating different approaches (Corbyn versus Blair for example in the UK), what we have is a Labor Party where, without major ideological differences and against a background of the almost complete absence of open class struggle, the battle becomes between individuals over the personality of the leader and the spoils of office.

The wider aspect of this is that the ALP as the party of class collaboration is the second eleven of capital, the party the ruling class relies on when the first eleven cannot implement real reforms for the benefit of capital. Thus, the first neoliberal government in Australia, the Hawke government, was more successful than Margaret Thatcher in the wealth shifting exercise from labour to capital. Hawke and Keating laid the groundwork for the rise of Howard, much as Rudd and Gillard did for the rise of the Abbott Turnbull duumvirate.

There is a range of reasons why the first eleven cannot deliver for capital. Fraser was paralysed by strike and other opposition to his neoliberal reforms. Hewson lost an election being too upfront about his neoliberal reforms. Howard lost in 2007 on the back of the viciously anti-working class WorkChoices and the electoral opposition it aroused. It stirred the supine union bureaucracy, not into industrial action, but into electoralism. This of course means the idea that you can fight and win flexing your own industrial muscle is lost among appeals to vote Labor.

The lack of a fighting working class helps shift the debate overall to the right.

Abbott was cagey about his economic agenda before the 2013 election. In power, the opposition both active and passive to his 2014 anti-working class and anti-poor Budget destroyed his government’s appetite for neoliberal reform. The bosses got nervous.

Turnbull is the next experiment in neoliberal leadership. He is clearly a better snake oil salesman than Abbott and his elevation has confused a number of people. His agenda is the same economically as Abbott’s — to make the working class pay for the crises of capitalism. When the downturn in Australia becomes a recession he will smile as he tries to abbott us. Some may fall for it, especially given the lack of opposition that is the Shorten led Labor Party.

As he said in his victory speech:

“This will be a thoroughly Liberal government — driven by freedom, the individual and the market.” 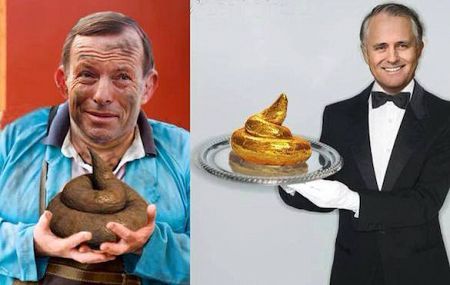 Just as changing Liberal leaders won’t change the fundamentals, neither will dumping Shorten for a fake leftie like Albanese or Plibersek, or promoting a smooth right-winger like Tony Burke.

There is a message for activists and socialists in the fall of Abbott. It wasn’t Labor who defeated him. It certainly wasn’t Shorten. It was those Indigenous, education, refugee, Medicare, feminist and other activists, the gay community and their supporters, the teachers, nurses, public servants, wharfies, building workers, and so on, actually fighting against Abbott and his rotten policies and sending a message to the wider community about Abbott’s rotten policies and the fact you could reject them and resist them.

It is the same message we need to develop in fighting Turnbull’s neoliberalism and that of whoever is leading Labor at the next election. On to the streets to fight for equal love, against the closure of remote communities, against climate change, to free the refugees, for women’s liberation and so on. Close down our workplaces to defend jobs and wages.

This story was originally published on John's blog enpassant.com.au and has been republished with permission. You can follow John on Twitter @JohnPassant.