Higginson reveals Liberal Party chaos: Where did all the money go?

THE LIBERAL PARTY of Australia is in deep shit.

On 22 February 2015, the party’s honorary federal treasurer (HFT), Philip Higginson, told the Party's federal executive he’d had it up to here.

He also told them:

'… at play are different dynamics, much diminished brand, much poorer economy, leadership travails, lack of trust within our own major donor base (>$100,000), many observers predicting further challenges, and many commentators predicting ultimate defeat in 2016.'

Philip’s not standing down because he wants to, but because:

'I am reliably informed that the new Federal President, Richard Alston AO, wants a new treasurer, and that’s the bottom line.'

Former Howard minister Alston was elected federal president (not to be confused with federal director) in June 2014.

Seven months later, in another Australia Day captain’s pick, but overshadowed by the farce of Sir Phil, Alston was appointed Officer of the Order of Australia for

Higginson’s letter, which can be read here, makes sad reading. 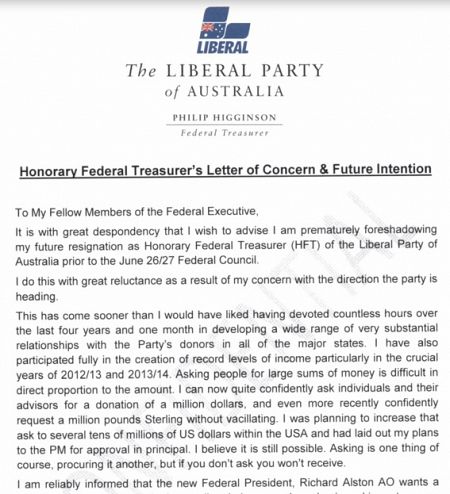 Click on image to read the letter in full

It is the first-person account of a proud man betrayed — hagiographic, bitter, bewildered.

Abbott and Higginson go back to 1992

'... when we agreed a small business engagement together … at that time he was out of work.'

Tony convinced Philip to join the Liberal Party and Higginson went on to found the Warringah Forum (not to be confused with the Warringah Club).

He and Tones were tight.

'In my home in December 2010, a few days before Christmas having a quiet little drink with Debbie, and our four sons with Tony & Margie, Tony mentioned to the gathering eight or nine household names he had unsuccessfully approached for the HFT role following my good friend, and Debbie’s cousin, Michael Yabsley’s resignation following the August 2010 narrow election loss. All said NO to him.'

'I felt particularly unhappy for him as he was still suffering mild unhappiness (as we all were) following the close loss of the Aug 2010 election due to two treacherous independents.'

This scathing letter from the Federal Treasurer of the Liberal Party about Credlin-Loughnane conflict is a corker: http://t.co/NApXsDdkT4

Higginson accepted the unpaid position and, according to him, did a sterling job.

Apart from rescuing the Liberal Party from near insolvency:

'When I first saw the numbers we were only $200,000 above the red line (and cash burning that monthly).'

Philip says he raised $70 million in his four years in the job, which is quite a bit of money. And he was on a roll, getting the hang of things, to the extent that he could

'... confidently request a million pounds Sterling without vacillating. I was planning to increase that to ask for several tens of millions of US dollars within the USA.'

Philip does not say what the foreign donors thought they would get for their money.

Perhaps he did not know:

'I have attempted at times without a great deal of success to maintain a close watch on where the money went due to stonewalling and obfuscation by management.'

Management, in this case, is the Loughnane/Credlin marital team. 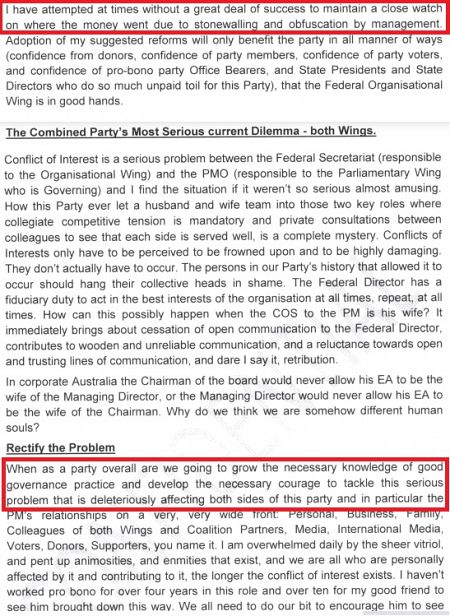 'When as a party overall are we going to grow the necessary knowledge of good governance ...?'

'I am overwhelmed by the sheer vitriol, and pent up animosities, and enemies that exist…'

And that’s just inside the Liberal Party.

But Philip isn’t quite done yet.

'I partly cease my fundraising efforts and governance stewardship on the transmission of this letter. I leave tomorrow to NYC … and perhaps rattle the can for the last time.'

Get out the hankies.

Shafted by current Abbott favourite Alston and up against the Credlin/Loughnane stonewall, Higginson made one last plea to the party:

'I do hope the recipients of this letter will respect my privacy and treat the letter with the utmost confidentiality.'