Having moved on from his role as Home Affairs Minister, Peter Dutton has passed on a backlog of asylum seekers vulnerable to exploitation, writes Dr Abul Rizvi.

MOST AUSTRALIANS would be surprised to learn that Defence Minister Peter Dutton’s most long-lasting legacy will not be his gratuitous cruelty or his tough talk on border protection but the biggest labour trafficking scam in Australia’s history — a scam that took place right under the nose of the great border protector.

How the organisers of this scam must laugh at Dutton’s incompetence. But how did this scam work and what are its consequences?

Over the past six years, Australia has experienced its fifth major wave of asylum seekers. But unlike the previous four waves, this is by far the largest. This wave is so big that for at least four years prior to COVID-19, asylum seekers were contributing around 10% to 12% of net overseas migration or around 5% to 7% of Australia’s population growth.

This wave of asylum seekers is also the first that is almost entirely a labour trafficking scam organised by various agents and labour-hire companies. The asylum seekers are initially assisted to enter Australia on visitor visas and then to apply for asylum. The majority are from countries such as Malaysia, China, India, Thailand, Vietnam and Fiji.

While they are being refused at a very high rate – often well over 95% – processing times have blown out to such a degree that asylum seekers can remain legally in Australia for two to three years with full work rights. The bulk of these people have come to Australia with the promise of well-paying jobs working on farms — the sad reality is that they are highly vulnerable to extreme exploitation and wage theft and often beholden to the agents and labour-hire companies that arranged to bring them to Australia.

All previous waves of asylum seekers to Australia had very high rates of approval as they were predominantly genuine refugees. The current wave that our great border protector oversaw is an abuse of Australia’s asylum system, the likes of which we have never seen — yet asylum advocates would prefer the scam not be mentioned. 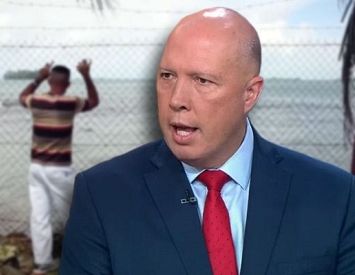 We have seen such scams in the past on a small scale. When I was in the Department of Immigration, we acted upon those quickly and closed them down by focusing on the organisers, processing applications very quickly and removing those who were refused. That was possible while the numbers remained relatively small.

That has not been the case under Peter Dutton and his Secretary, Mike Pezzullo, over the past six years. The caseload was allowed to grow rapidly with little response — reflecting either negligence or a lack of understanding of how to deal with such scams. Given their strong public comments on protecting Australia’s borders, the reason for the lack of rapid action remains an ongoing mystery.

While the size of the caseload at the primary stage has declined from a peak of almost 40,000 in February 2020 (just before borders were closed due to COVID-19), it was still at an extraordinary 34,391 at end February 2021 (see Chart 1). The Department of Home Affairs has barely made a dent into the primary caseload despite the closed borders limiting potential new applications.

As the Department of Home Affairs slowly processes the cases, there is a steady rise in the caseload moving to the Administrative Appeals Tribunal (AAT) from a negligible level six years ago to 31,144 by end February 2021. This will keep rising for many more months, possibly many years, unless funding for the AAT is increased significantly.

As the AAT gradually deals with its own backlog, the number of asylum seekers who have been refused at both stages and are yet to depart has been steadily rising. Once again from a negligible level six years ago to 26,064 at end February 2021. The number of unsuccessful asylum seekers without work rights and in an extraordinarily vulnerable position will continue to rise.

Despite international borders being closed, new applications at the primary stage have fallen to only just below 1,000 per month (see Chart 2).

A portion of these new applications will be people being encouraged by agents to take advantage of the large backlog of applications and slow processing times of between two and three years to be processed through both the primary and AAT stages. This enables applicants to be on bridging visas with work rights and is confirmed by the bulk of these applications continuing to be from source countries where approval rates are very low (see Chart 3).

There was a brief effort by the Department of Home Affairs to accelerate processing in May 2020 when 2,330 applications were decided at the primary stage (see Chart 2). This effort appears to have dissipated with the number of decisions falling back to around 1,000 per month. In other words, the primary stage backlog has stabilised. The backlog at the AAT is steadily rising as it continues to receive more new applications every month than it can process.

Having given up on addressing the backlog of applications, there is strong evidence the Department of Home Affairs has also given up trying to do much about the growing number of refused asylum seekers — currently, just over 26,000 but will in future be much larger.

This table highlights a steady decline in compliance activity targeting the location of undocumented workers and employers who employ these workers despite the number of such workers and employers being at record levels. Department of Home Affairs either does not have the resources to maintain compliance activity at historical levels or it has been instructed, possibly by the Agriculture Department, to ignore employers on farms using undocumented labour.

Does the Agriculture Department see this labour trafficking scam –asylum seekers and undocumented workers – as its main strategy to address the reported shortage of farmworkers?

The new Minister for Industrial Relations, Michaelia Cash, has ruled out any amnesty. She is concerned that “an amnesty would send a dangerous message that it is okay to flout our strong visa and migration rules, principles that this Government has worked incredibly hard over a period of time to secure”.

Apparently, Cash saw no irony in her boasting about Australia’s strong visa and migration rules and the fact David Littleproud wants an amnesty for undocumented workers brought to Australia in the biggest labour trafficking scam in Australia’s history — a scam that took place under the noses of Peter Dutton and Mike Pezzullo.

New Home Affairs and Immigration Ministers Karen Andrews and Alex Hawke will inherit the growing number of unsuccessful asylum seekers in Australia as well as the massive backlogs at both the primary level and at the AAT.

While Dutton has now escaped accountability for this situation by being moved to Defence, Andrews and Hawke should ask Pezzullo some hard questions including about the current situation:

Sadly, I fear Pezzullo will have no answers to these questions and will continue to pretend there is no problem to be addressed. And Andrews and Hawke may be too intimidated by Pezzullo to press him on the issue.

Similar to the situation in the U.S., get ready for the number of unsuccessful asylum seekers continuing to grow, continuing to be exploited and the Australian Government continuing to sweep the issue under the carpet. After all, Morrison et al cannot possibly admit that they have been asleep at the wheel when it comes to managing Australia’s borders.