Parliament not Shorten gossip and rumours

Tony Abbott must be praying that a Parliamentary Code of Conduct never sees the light of day, says senior correspondent Barry Everingham. 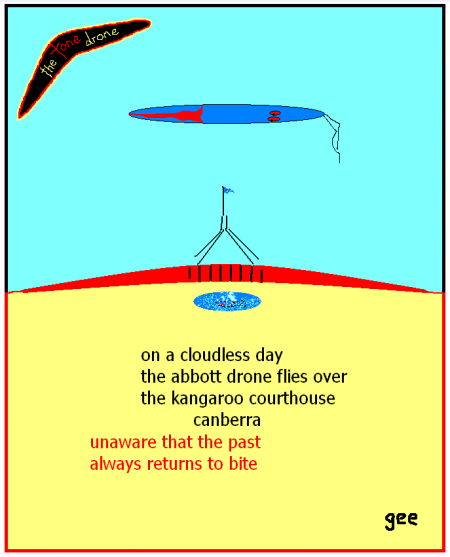 Tony Abbott must be on his knees 24/7 praying that a Code of Conduct never sees the light of day in the Federal Parliament.

If such a Code was ever accepted, it would mean Abbott might have to desist in his constant abhorrent behaviour towards Julia Gillard on a daily basis — we all know that the failed seminarian is a misogynist of the lowest order and wouldn’t take on a bloke in the way he does Gillard.

He smirks when he deplores the scuttlebutt surrounding Bill Shorten’s marriage, yet it doesn’t take much to assume that Abbott would have put his dogs of innuendo on to Shortens’s case.

After all, Abbott is devoid of policies and quaintly tells us they will be released when Gillard announces the date of the next election.

Now, I have an interest to declare here.

I have enjoyed Shorten’s company over many years at the house of mutual friends — we are not mates, but we are acquaintances and our meetings, whenever they take place, are always cordial.

I am close to his former in-laws, Felicity and Julian Beale and their daughter Deborah, Shorten’s former wife, who have been my friends for many years. I have never met Chloe Shorten, though I know and respect her parents, Their Excellencies the Governor-General and Mr Michael Bryce.

The vice regal  couple paid my family an incredibly wonderful compliment by leading more than 300 mourners at my late wife’s Memorial Service in Melbourne last January.

From what I have gleaned – and not from family connections but from mutual friends – the Shorten marriage is solid and is built on mutual love and respect.

So, why are the Liberals being so bloody minded towards Shorten?

Could it be that in the unlikely event Gillard is rolled in this current Parliament, Abbott would not want to face a man of Shorten’s intellect across the despatch boxes, knowing the former trade union supremo would wipe the floor with him?

The unfortunate mess surrounding Craig Thomson is giving Abbott a field day — but his demands for the Government to set the Member for Dobell totally adrift and not accept his vote is, quite frankly, laughable.

Abbott and his hench-people have been strangely quiet, for instance, about the appalling mess  Sophie Mirabella is in over the Will of her aged former live-in lover, the well-respected Professor Colin Howard, whose family are confused about the ownership of their late father’s property.

And, if my memory serves me correctly, Professor Howard contributed to Mirabella’s election fund when she ran for the seat of Indi, ably assisted in that campaign by the disgraced former Liberal powerbroker, Noel Crichton-Browne.

It’s no wonder the Liberals are a closed shop about those episodes, but I am mystified about why Labor hasn’t reminded the public of the type of people surrounding Abbott.

When Mirabella screeched a comment across the floor of the Parliament recently, when Anthony Albanese was taking Abbott apart, the Leader of the House paused to remind Mirabella thus: “I’d be careful what I said, if were you — we haven’t started on you yet!”

The standard of behaviour of the Liberals and their country cousins in the House of Representatives is the lowest in living memory and it’s all because the Independents wouldn’t have a bar of Abbott.

Neither should the Liberals.