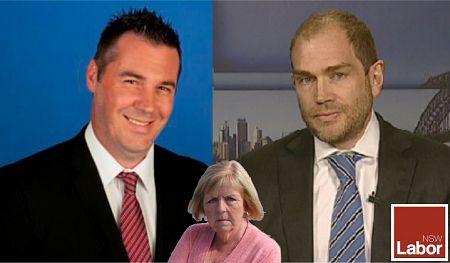 WITH THE NSW STATE ELECTION coming up in March next year, we are now seeing the final stages of the pre-selection process at work for the Labor Party.

Unfortunately for the Liberal Party, their pre-selection process is set to continue until January, as some electorates are awaiting the findings of the Independent Commission Against Corruption in case those stepped aside from the Party after ICAC revelations are granted another chance.

The Greens are suffering from internal factional wrangling as the “faceless men” of their party battle for the control of their party room votes. Would this make them all puppets of whatever faction controls their collective conscience?

Does that mean they have been undemocratic up until now?

Over the past few weeks, I have been highly critical of the manner in which some Labor pre-selections have been carried out, the choice of some candidates and by the seeming willingness of head office to turn a blind eye to dubious conduct, such as branch stacking.

Given the controversial Auburn pre-selection takes place this Saturday and after the events of last weekend’s Wollongong pre-selection, I thought it was a good time to look at where things are up to in Auburn and regarding the outcome in Wollongong.

Both Hay and Scully are from the party’s right, while Martin is from the left, yet in a shock move Hay gave her preferences her the rival faction candidate Martin, as the below how to vote cards show: 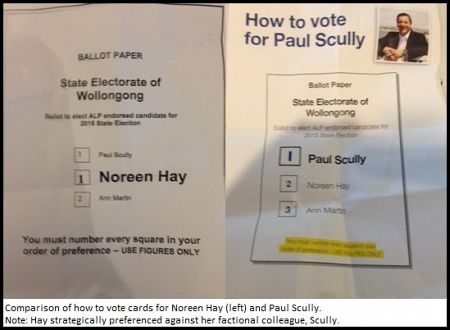 Many people were highly dissatisfied with the conduct of the vote, with many longstanding branch members being told they were ineligible to vote and turned away, including South Coast Labour Council secretary Arthur Rorris, and a poor lady in her 80s who had struggled in on a walking frame.

The ABC also reported that voters were yelled at and intimidated as they tried to vote.

Given that so many allegations appeared in the press regarding Sussex St involvement in the lead up to the vote, as well as the controversy during and after the votes, I contacted NSW Labor General Secretary Jamie Clements to put some of the members concerns to him.

Below are his unedited responses to my questions and my take on his answers.

Wixxy: Is there to be any investigation into the irregularities surrounding the Wollongong pre-selection?

I understand that the internal appeals tribunal has referred so matters concerning the administration of the Mt Kiera branch to party officers for investigation. I have not been provided with the decision as yet, however, when I do, we will have a look and take action.

This is something that I hope will not be swept under the carpet. There were allegations of branch stacking at Mt Kiera, however that was only part of the problem.

Fairfax reported that Labor’s Independent Appeals Tribunal had discovered 'manifest and repeated inconsistencies' in the branch records, which included the branch minutes and attendance records that made the branch 'defunct'. Amusingly, this included discussion on Barry O’Farrell’s resignation as Premier a week before it happened, meaning the branch has their own Tardis or the records are simply false.

Wixxy:  Are there to be repercussions to members who provided false information regarding their addresses in order to be able to vote in the either pre-election?

This is a matter for the Australian Electoral Commission.

Yes it is. However it is ignorant to think that this is not also a matter for the party. If a member has intentionally set about to deceive the party in order to improperly influence the outcome of a pre-selection than that is clearly a breach of party rules and if a party wishes to maintain high levels of integrity it needs to follow its own rules.

Wixxy: The ABC has reported voters were intimidated and interfered with whilst voting, which alone would appear to be grounds to call the vote null and void; is this something NSW Labor is intending to do?

I have heard no allegations about this. Ultimately disputes over the conduct of a ballot are matters for the Independent Appeals Tribunal to deal with how ever no one has lodged any complaints with them.

I will take it for granted that Jamie has, perhaps, not seen the ABC report, however I find it alarming that Party members seem to no problem reporting this to the ABC but have such little faith in Sussex St that they haven’t reported it to them.

Wixxy: Were the votes of the Mt Keira branch quarantined?

The disputed votes from the Mt Kiera branch were treated as challenge votes and were put in a sealed envelope and not counted.

Wixxy: Is the Regents Park branch also to have it votes quarantined, given the allegations of the grand scale of branch stacking at that branch?

The votes of the Regents Park branch are all the subject of a credentials dispute and will therefore be given challenged votes and not counted until the dispute over their eligibility is resolved.

This is good, however again I hope that intentional breaches of party rules to influence pre-selections should be met with party expulsions. 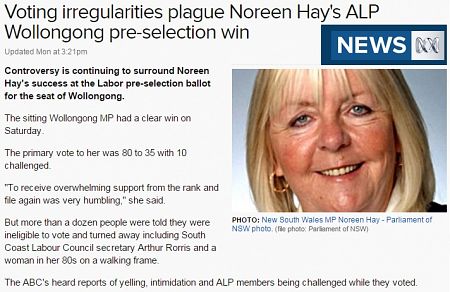 Wixxy: If this is the way pre-selections are to be carried out, can members have any confidence at all in the fairness of the integrity of the voting process and, if so, why?

I am not aware of any challenge to the conduct of any ballot conducted by the NSW branch during my time as General Secretary. Any such challenge would be dealt with by an appeals process headed up by Greg James, a retired Supreme Court judge, and appointed by a 3/4 vote of the administrative committee. The decisions of these tribunals are reviewable by the Supreme Court. This is a far cry from the days when Joe Sciomone and Joe Tripodi ran these committees.

The question isn’t about the vote itself it is about the process leading up to the vote, although the intimidation of voters reported at the ballot in Wollongong is of concern.

This issue is more the credentialing process of those who seek eligibility to vote. This includes the branch attendance records; the real address of members, as opposed to claimed address; the integrity of the branch records; use of the 10 year rule; and granting continuity of membership to those who have been unfinancial for a lengthy period to allow them to vote.

Members are sick of seeing 50 extra people rock up to a meeting when an important vote is held and yet, when there are polling booths to be filled on election day, these people are nowhere to be found. Members are also sick to death of hearing frankly pisspoor excuses from Sussex St as to why these matters are seldom investigated.

Members are also of the opinion that the only reason there is any scrutiny at all of the Regents Park and Mt Kiera branches is because of the media attention. It gives the impression that, in order to make the party follow its own rules, damaging information needs to be leaked to the media.

Wixxy: What do you have to say in your own defence to the vast numbers of members and union officials calling for your resignation due to a lack of confidence in your performance?

JC: I was elected by almost 60% of the most recent annual conference, however, the position of General Secretary always has and always will have its detractors.

It is certainly true that you can’t please everybody and while a “glass half full” outlook is admirable, for someone in Jamie’s position there is, of course, an alternative perspective.

Jamie was installed as Labor’s NSW Secretary in August 2013, with many members bemoaning the fact they had been denied any chance of a say in the matter.

By the time annual conference came around the following July, Clements had spent less than 12 months in the role, while the members reeled from the fallout of the Rudd/Gillard debacle and the Federal election loss. Yet in that period, when Sussex St had little of the member’s attention, more than 40% had decided to vote against him at the first available opportunity, despite him having the support of the proxy votes of the right leaning unions.

In the last few months, however, the performance of Sussex St has been under far greater scrutiny and it is becoming apparent that those who previously supported Clements in his position now find themselves less than enthusiastic.

It's fair to say I have been less than flattering in my opinions regarding the performance of the state secretary in recent weeks, however to his credit he has responded to my queries quickly and without fuss and denied any personal involvement in the Wollongong Noreen Hay campaign.

I also recognise that his role is a difficult one and he has come into the position at a difficult time. However the position is also an extremely important one I know that Clements is fully aware of the importance of perceptions, people vote based on their perceptions.

Some of the pre-selections have given both the media and party members the perception that not a lot has changed.

Jamie Clements added the below view of the pre-selection process after answering the questions:

We all support rank and file elections. It is the breaching of party rules regarding branch stacking amongst other things that is not supported.

We are not a party of fools, we know we won’t agree with every the outcome of every pre-selection.

However it’s the outcomes that appear pre-determined that we do take issue with.