Mr Kelly and Mr Turnbull, people will die this winter, but not due to renewables

MALCOLM TURNBULL is a legend in his own lunchtime.

A few weeks ago, he was telling us he would be prime minister "for a very long time".

The polls tell a very different story. If an election were held now, Labor would romp it in. Turnbull would be in the dustbin of history, where he deserves to be.

It is not only the polls that tell that story. His party doesn’t fully support him. Indeed, Abbott and his dwindling cohort of supporters want to finish Turnbull off now. No amount of appeals by Turnbull to Menzies as a "liberal" will change the path to destruction the warring illiberal factions – conservatives on one hand and reactionaries on the other – are on.

It has been the same sorry story in the polls, consistently for the Turnbull Government, since almost the first week after the 2 July election on 2 July, when "all that glitters" Turnbull ended up with a one seat majority. And no wonder.

Turnbull’s grovelling before the Queen captures his predicament and his tortured political reality. The other day, this "republican" for the wealthy proclaimed that we are all "Elizabethans".

Not me, mate. Thankfully I am not alone, although I am sure not too many, at the moment, share my vision for a democratic workers’ republic to clean out the shit of ages from the Augean stables.

Which brings me to Liberal MP Craig Kelly, one of the "geniuses" who keep Turnbull, or whoever his replacement will be, in power. He is also, unbelievably, chairman of the Coalition's backbench energy and environment committee.

Last week, Kelly told us in all seriousness that "people will die" this winter because renewable energy is ratcheting up the price of winter heating.

To be fair, he is right about one thing. People will die because energy prices jumped by up to 20% on July 1 in the eastern States. That means around an extra $400 to $500 in the cold months for heating. 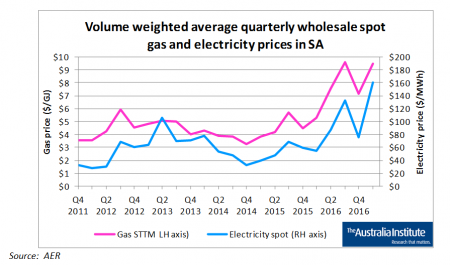 As Hugh Saddler shows in an Australia Institute report, renewable energy has almost nothing to do with those price increases. It is the rise in gas prices that explains the rise in electricity supplies.

Saddler says, in relation to South Australia, but also applicable to the rest of the mainland:

Despite the extra cost to move to a totally renewable society (in 2010, Beyond Zero Emissions estimated the cost at about $370 billion over a decade — that will now be about 15% less in real terms, given cost reductions), it will not only reduce costs over the longer term, it will save the planet if we move to renewables early enough.

Australia’s energy supply infrastructure (for example, poles and wires) is seriously outdated. Government and private owners have been skimping on fixing them to make a little bit more profit. Revitalising that infrastructure will cost much more. The 10-20% electricity price rises are one way to force consumers to pay for that.

Gas from the eastern States is exported to Asia. This has created much less supply for the Australian market and has seen domestic gas prices skyrocket. As Saddler has shown, this has a flow on effect on electricity prices.

Under the influence of the dangerous drug-free market, the Turnbull Government until recently had, unlike every other gas exporting nation, not mandated a reserve policy, which in effect could divert exports back to the Australian market. Spurred on by the political consequences of massive gas and hence electricity price rises, from 1 July, the Government has established an Australian Domestic Gas Security Mechanism to safeguard supply. What it cannot do, as the industry has pointed out, is guarantee a cheap supply. In the short term, that would require price controls. In the long term, it would require nationalising the energy industry and the oligopoly of suppliers.

In any event, it is all too late for this winter. Craig Kelly is right — people will die because of high electricity prices in the coming days and weeks if they have not already. Will the people who die be rich or poor?

Not too many people living in mansions in wealthier suburbs will die because they cannot afford the higher energy prices. They are more likely to own the energy companies than to die because of their high prices.

It is poor people who will die. Take Canberra where I live — the temperature some nights recently has been minus eight degrees, or thereabouts.

The ACT has the second highest percentage of homeless people in the country (after the Northern Territory). There are about 1,800 homeless people in Canberra, including about 120 sleeping rough every night. People like John, whose plight was featured in a Canberra Times article,  run the risk of freezing overnight in their cars, or on the streets and in the alleyways.

Those below the poverty line – many students, pensioners or unemployed people – may have to trade off food or rent for heating, or heating for food or rent.

The working poor and lowly paid workers living in their own rented or supported accommodation are not safe either. Many workers on the minimum wage of $36,134 a year live in poverty. They will end up not switching the heating on because their pay is taken up with food, rent, clothing and transport costs.

The Turnbull Government could prevent this calamity. It could increase the amount it pays to pensioners, the unemployed, the sick, students and others on low government payments above the poverty level.

For unemployed people, this would mean an increase of about $160 a week. That would save lives because then they could afford accommodation, food and higher energy prices. For the 35% of pensioners living below the poverty line, a substantial pension increase could give hope, as well as food, housing and heating.

The Government could also improve the remuneration of low paid workers. It could, for example, take action to reverse the penalty rates cuts and increase the minimum wage of $36,134 to a reasonable living wage. But it won’t.

We "peasants" are unimportant to the wealthy leaders who run Australian politics. Our immiseration is their deliberate strategy.

People’s lives being at risk because they cannot find the money to pay their heating bills is not a failure of the market. It is how the market operates.

After visiting the UK, Turnbull went to France to discuss with President Macron the $50 billion submarine deal between the two countries. Coming just six days before Bastille Day on 14 July, it was a timely reminder.

$50 billion for submarines, nothing for the poor and low paid. The French aristocracy never saw it coming either, Malcolm.