As record debt under the Morrison Government spirals to new heights, perhaps the Coalition will become synonymous with debt disasters, writes Tarric Brooker.

WHEN the Global Financial Crisis (GFC) arrived on Australia’s shores in 2008, the then Rudd Government swiftly deployed a $51 billion stimulus package to support the economy. The Coalition moved to oppose the Rudd Government’s response and propose their own alternative based around tax cuts.

The Coalition has been attacking Labor’s GFC response ever since.

The slogan “Labor’s debt” has become deeply entrenched in the Coalition’s vocabulary, despite the enormous explosion in debt that has occurred under the Abbott, Turnbull and Morrison governments in the past seven years.

This has been beautifully illustrated by Independent Australia's Alan Austin in the graph below. 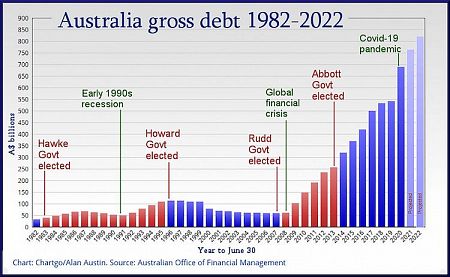 Some of the items on the Opposition Leader's list were.

Fast forward to 2021, the Liberal Party is singing quite a different tune on wasteful spending by governments during a crisis.

In August last year, the Commonwealth Bank concluded that the $14.4 billion rise in gross company profits in the second quarter, was largely driven by JobKeeper and stating:

'Today’s strong result doesn’t reflect the reality of what was happening in the economy in the quarter. Rather, strong profit growth is down to the stimulus payments provided to businesses because of the COVID-19 pandemic.'

Effectively, the Morrison Government’s JobKeeper package was so large and ultimately poorly targeted, that it didn’t matter that total sales activity for businesses dropped by $77 billion during the second quarter of 2020.

In fairness, this was driven in large part by the generally stellar management of the pandemic by most of the various state and territory leaders.

As a result of the relatively well-managed nature of the pandemic in Australia, many businesses that applied for JobKeeper in the dark days of March and April didn’t end up needing it for the entire six-month period.

But despite JobKeeper initially being costed at $130 billion, there was no mechanism for the Government to withdraw support early or clawback unneeded payments if things turned around significantly for many of these businesses.

Given that JobKeeper was the main driving force behind a $14.4 billion increase in gross company profits in just three months, it could be argued the level of waste is well into tens of billions of dollars over the life of the program.

But how does a government known for being ruthlessly fiscally conservative, go to writing off potentially tens of billions of dollars in wasted taxpayer money as simply the cost of doing business?

The drivers of the Morrison Government’s policy response to the pandemic is likely to be hotly debated for years to come, forming the subject of many political books that will grace the shelves of our local libraries.

But given the evidence we have at hand, they may have simply been caught flat-footed and had to come up with a response at a time when unemployment lines extended around the block.

In late February, less than a month before COVID-19 cases began to skyrocket across much of the country, the Government was planning on relaxing the international travel ban to allow entry to international students from mainland China.

While one could argue that the Morrison Government was planning behind the scenes since the pandemic began, the ultimately poorly constructed and targeted nature of JobKeeper lends credence to the theory that it was forced to come up with the policy in a hurry.

When contrasting the level of waste between the Morrison Government’s pandemic response and the Rudd Government’s GFC stimulus package, there is simply no comparison.

Over a single quarter, the waste from the Morrison Government’s support package would have been enough to house over 80 per cent of Australia’s 116,000 homeless people, as we covered here previously at IA.

While there is little doubt that the Morrison Government throwing $257 billion at the economy prevented a much deeper recession from occurring, it should still be held accountable for the entirely avoidable waste in the JobKeeper program.

For over a decade, Labor has been hounded by the Coalition over what can now be viewed as a relatively minor amount of "waste" in its GFC response package.

After a continued explosion in debt under the Coalition and tens of billions of wasted taxpayer money, perhaps now the tables will turn and Labor will be hounding the Coalition over the “Coalition's debt” for a change.

Today Scott Morrison had the chance to set out how he would help Australians who can't find a job, can't find enough hours and can't get ahead because of stagnant wages, this was his opportunity and he missed it. A clip from my press conference with @Mark_Butler_MP today. #auspol pic.twitter.com/SuwEdZ0mux