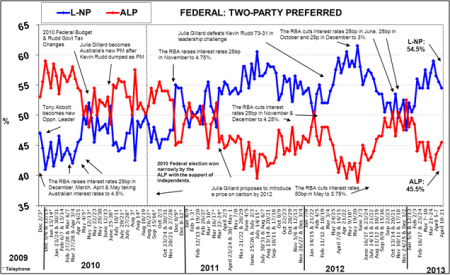 There was even worse news in the Poll, with its primary votefalling by a steep 3.5%. This loss largely came through voters switching to Independents and minor parties, with their primary vote climbing 3% to 13%. The ALP also saw its primary vote edge higher by 0.5% to 32.5%, while The Greens support was unchanged at 10.5%.

Pollster Gary Morgan said the poll showed a positive response by electors to the Government’s response to the Gonski Review:


"The improvement for the Government comes after Prime Minister Julia Gillard announced a $14.5 billion increase in education funding over six years in response to the Gonski Review into school funding. Although the plan has widespread backing, it requires the support of the States & Territories to be fully implemented." 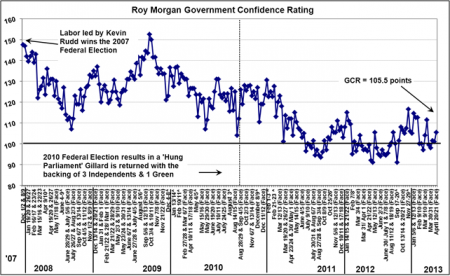 * This multi-mode Morgan Poll on Federal voting intention was conducted over the last few days, April 18-21, 2013, with an Australia-wide cross-section of 3,270 Australian electors aged 18+. Electors were asked: “If an election for the House of Representatives were held today — which party would receive your first preference?” Of all electors surveyed, 1.5% (unchanged) did not name a party.