The Abbott Government's changes to Medicare are poised to make life even tougher for struggling Australians, writes Peter Wicks from Wixxyleaks.

THERE IS LITTLE DOUBT that life is becoming tougher under the Abbott Government — and it seems poised to become even tougher.

With the unemployment level reaching dizzy heights it hasn’t reached since John Howard was in The Lodge and the cost of living heading in a Northerly direction, I thought I’d offer some words of comfort my mum used to say for those struggling to make ends meet:

“At least you have your health, and that’s the most important thing.”

I’m sure many mothers used to say the same thing, however I wonder if Tony Abbott’s mother ever did. If she did, it doesn’t seem to have sunk in; or perhaps he just doesn’t care, thinking poor health is other people’s problems.

In continuing with the Liberal Party ideology that says certain things should only be for the rich – you know, little things like a fair trial or high quality education – Tony Abbott seems determined to add good healthcare to the list of things only the rich should enjoy.

It was something that actually made us glad to have Jacqui Lambie in the Senate — after all, the Coalition's plans for a $7 charge to see a doctor was only abandoned once it became apparent the plan would not pass through the Upper House. The Coalition referred to it as a GP co-payment at the time, the country however thought of it as a kick in the guts.

Not only that, there was some creative accounting being done behind the scenes with Joe Hockey’s calculator — the one that seemingly goes to 11. The money raised by the tax was supposed to make the Medicare system more sustainable, despite all of it going into a Medical Research Fund. The savings to the Government were based on the notion that the GP co-payment would make Australians go to the doctor less and hence save the Government money. A forward thinking person may think that a lower standard of health through less doctor visits may have an impact later on hospital admissions but, alas, there was not a forward thinker to be found in the Coalition caucus.

Luckily, the Senate did.

However, we were not saved for long.

Tony Abbott has claimed to have heard Australians voices on a number of the unfair elements of his Budget and wants us to think he is making changes accordingly.

If health is supposed to be one of the things Abbott is sending a new message to the nation on, then that message translated would appear to be: “Screw You”.

As a means of going around the Senate to have his great big new Sick Tax implemented, Abbott and his former henchman come Health Minister Peter Dutton concocted a scheme to cut the rebate paid to doctors, thus forcing doctors to have two options — charge patients or effectively halve their income.

However, given it is a Coalition Government we are talking about, even something this simple could not be done without a major screw up.

The changes were announced by Dumb and Dumber, Dutton and Abbott, on December 9 came with a “fact-sheet” to the industry that was anything but. According to the fact sheet, doctors that have not completed GP specialisation would receive a higher rebate than those that have. 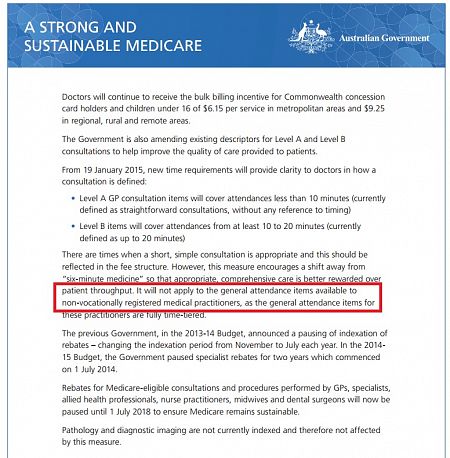 You could be forgiven for thinking that Abbott and co were preferring us to see witch doctors, medicine men, or gypsies with crystals rather than specialist GPs.

Twelve days later, crisis was averted when changes were made to the definitions of Medicare items for non-specialised GP’s.

So what are the changes and how will they affect us?

For most, that will mean that the sick tax has gone from $7 to $20. What it also means is that if you go to a GP that bulk bills, after the 19th January when the sick tax kicks in there is a very good chance they won’t be bulk billing anymore. 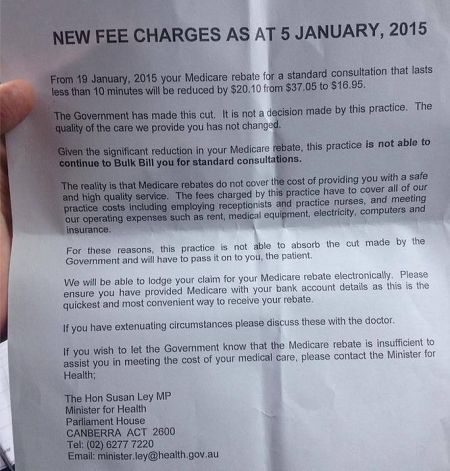 Another issue will be that the doctors’ visits will be longer, as the rebate is less affected by longer visits, thus drastically increasing waiting times for patients.

Don’t be surprised if some members of the Coalition try to blame this on the Senate for refusing to allow the original $7 sick tax pass Senate. We can expect the Coalition spin doctors and MPs to tell us all how the Medicare system must be sustainable and how the Government had to stem the bleeding of funds from the budget due to those who rort the system by seeing a doctor too often.

However, there are other ways to make Medicare more sustainable than by implementing a sick tax. Not wanting to be one of those who criticises without offering a solution, here’s one from me.

People don’t choose where they have a heart attack, or plan where they are involved in a car accident, so in emergency situations many of the benefits private health insurance cover are about as useful as a unicycle to your pet goldfish.

Nevertheless, despite using the public health system, the government still offers them a discount for having insurance while those that don’t have insurance subsidise their stay in hospital.

The rich are being subsidised by the poor. For those of you thinking this must have been a John Howard initiative, you would be right. And let’s not forget Tony Abbott was health minister under Howard.

While the Coalition's insurance company lobbyist mates rub their hands together, the middle class welfare continues as we all are forced to pay a sick tax.

Welfare is designed to help those that need it most, however we currently have a government that seems to think differently.

As we have already seen, the Abbott Government's sights are firmly set on the unemployed, the pensioners and the disabled — or "the leaners", as they are often referred to. That trend seems set to continue, as the Coalition's middle-class welfare gravy train continues rumbling on.

In another twist to this debate, the sick tax coming into force on 19 January will push a hospital system already struggling under Coalition state and Federal cuts even closer towards breaking point. This, in turn, will add to the pressure on the state governments to call for changes to the GST.

Peter Wicks is a Labor Party member and a former NSW ALP state candidate. You can follow Peter Wicks on Twitter @madwixxy.

@JohnGrahamArt originals are so cheap, some people can even afford them after visiting a GP. http://t.co/1JcY3DY4IH pic.twitter.com/b7VG2VOI0B