Marriage equality: Understanding the arguments of the 'No' case

The arguments of the "No" are all exceedingly weak, says John Haly — apart, perhaps, for one...

THE STARTER GUN has officially “legally” fired on the government’s campaign for the alternative postal survey formerly known as the plebiscite. The all too predictable debate surrounding the question of marriage equality in Australia has finally begun in earnest.

Initial salvos have already been shot across the bow by the “No” campaign in recent weeks, raising uncertainty amongst the uncommitted. Despite this, the polls have long demonstrated a clear majority of Australians wanting marriage equality for some years. What is interesting to note here – presumably due to the prolonged nature of the political resistance – is that the “No” campaign’s latest arguments against marriage equality reform appear to have evolved.

In part, this could simply be due to the rebuttal against the “No” campaign’s original arguments having already been trotted out ad nauseam. Indeed, Eric Abetz, a long time serial disparager of anything remotely homosexual, published his objections in the Canberra Times in 2015. I penned a long response of my own, although it is ground I am not looking to retread here.

But with the re-purposed survey upon us and their lack of success to date in prosecuting these earlier positions, the “No” campaign has revved up their anti-marriage equality rhetoric. Demonstrated by suddenly expanding their oppositional repertoire. Evidenced by the surprising emails, I began receiving from the “oktosayno” website. While the arguments may have shifted, I would suggest that the reasoning on display is still not that nuanced, intellectually rigorous or engaging.

Let's consider the main arguments of the "No" case.

The issue of children is recurring. It is often raised by those most in denial about the large numbers of same sex couples already quite happily and successfully producing and raising children. Concern for children seems restricted to those that are raised by homosexual couples, despite the fact that when it comes to family stability, studies are proving that heterosexual parents are not always managing better family outcomes. But the opponents to marriage equality seem to be unduly concerned about issues of procreation.

Procreation and marriage are not necessarily related. Either one may be the cause of the other to occur, but the sequencing can fall on either side of the other. Alternatively, procreation or marriage may happen in isolation without the other ever being involved. The marriage vows in contemporary western society are usually about an expression of love between two adults. Children aren’t involved, even if they are already at the ceremony standing by their mom or dad or step-mum or step-dad. It’s not their marriage! 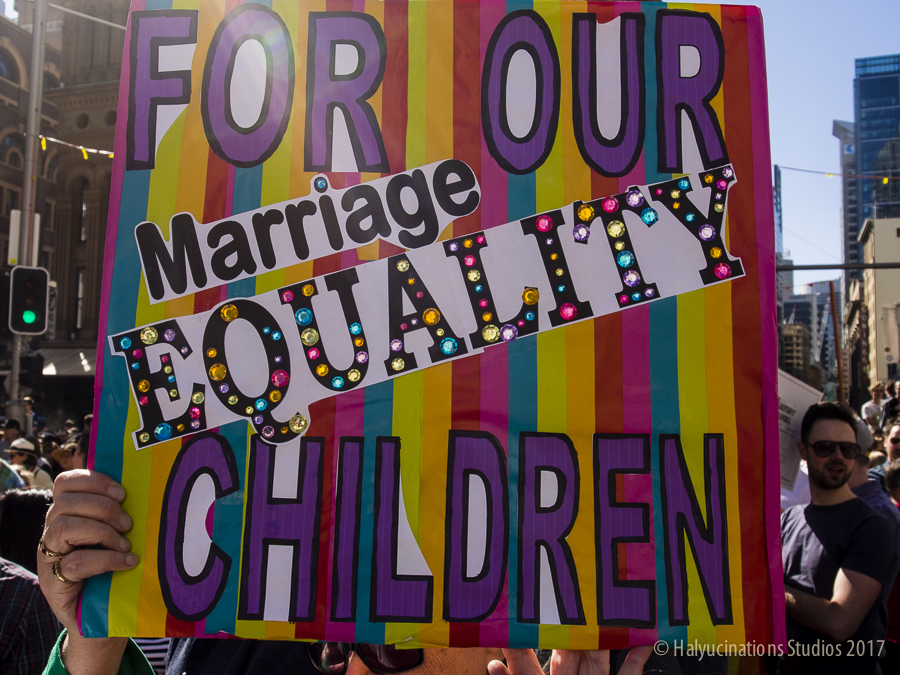 Marriage equality is about justice and law, not about religion and procreation. Modern religious communities have appropriated “marriage” and claimed it is theirs to dictate how and to whom it should be applied. However, marriage as a religious undertaking not only predates these religions but, in the case of Christianity, it wasn’t even included as a religious celebration till the 9th century. Even then, the ceremony didn’t include a priest until the 12th Century. Marriage and its legal prerogatives have changed a lot since then, regardless of any religious claims to inviolable and unwavering immutability.

Marriage, today, should be about the two non-related adults legally acknowledging their love for one another. I am appalled that I have to expressly use the term “non-related”, as I have seen social media claims suggesting marriage equality is a slippery slope leading to incestuous relationships. In the unfounded nature of arguments that arise, the assumption that the parties are not direct descendants or siblings, including adopted (by law) relationships, has to be re-stated. Disallowing relatives is all outlined in Part 3 of the Marriage Act 1961, under the heading “Void marriages” (s23). Not being able to marry minors is in Part 2. Marriage equality is about changing the Act’s definition of Marriage as between “two people” instead of “a man and a woman”, and removing s88EA in Part 5 (added by Howard), not Parts 3 or 2.

The marriage equality movement wants to change only five words for two in the Act and remove the section Howard added in 2004 because he realised the Act was “gay-friendly”. That renders genderless the subject of who one can legally marry. In short, “two people“, not exclusively “a man and a woman“. So no, Eric Abetz polygamists need not apply, as this is also prohibited by Part 3.

Churches will still retain the right to deny marriage ceremonies from people they don’t want to have married in their churches, irrespective of whether they are Muslims, Buddhists, atheists, non-attendees, Great Spaghetti Monster worshippers, or even homosexuals (Part 4, Division 2, s47, Marriage Act). It is about legal equality, not ceremony. It is not about excluding a group in the community. It is about allowing a relatively significant minority group access to the rights and privileges the vast community already has. It’s access to the legal (not religious, not procreational) right to be married. Marriage ratified by the state, not church.

Resistance to political correctness as an argument is odd — or, at the very least, anti-social. Yes, extreme aspects of PC have become draconian. But marriage equality isn’t about being draconian, it is about being fair.

For the most part, political correctness is what everybody who isn’t a bigot calls politeness. Yes, Scott Morrison, you do have the option (perhaps rather than right) to be a bigot, but the rest of us want a civil interaction that will build a cohesive society that binds us all together, not separates us. The likes of Peter Dutton, Andrew Bolt and Tony Abbott may rail against political correctness, but if the alternative is the sort of hate speech and fear-mongering you lot love to express quite freely, the rest of us wouldn’t mind skipping that, thanks. Political correctness started as a “counterweight to prevailing orthodoxies and power” and, although in particular cases it turned oppressive and shrill, it originated out of trying to protect communities, including the gay ones. As such, it still has value and relevance and marriage equality assists that. So, despite the enduring prevailing will amongst the oppressed and marginalised to speak truth to power, the “No” campaign’s freedom of speech is still equally well preserved.

There is one “No” campaign argument for which I have no rebuttal. It is one advanced in one of the many satirical pieces that arose out of opposition to the first televised ad of mothers talking about concerns for their cross dressing children and safe school issues. (Note: Safe Schools is about bullying in schools and has nothing to do with marriage equality.) The counter ad shows a young woman talking about how she had planned her marriage for months but that it would never begin to compete with gay individuals who have been planning their marriage for decades.

That “wedding competition” line has to be the most valid argument for the “No” vote campaign. It made me laugh and then realise, that’s quite a valid fear. You’d better believe they have been waiting for that day for years. It will come and the weddings will be fabulous!