Turnbull's much anticipated double dissolution election threat is all about dispensing with Senate crossbenchers and nothing to do with union corruption, says managing editor David Donovan.

SO, THE WORST kept secret in Australian politics has just been confirmed. That is, Malcolm Turnbull wants to hold a double dissolution election on 2 July this year.

His mechanism is to recall Senate on 18 April, wait until they don't pass legislation to reestablish the Australian Building and Construction Commission — a kangaroo court designed, more or less, to stamp out the CFMEU, who would appear to be the Liberals' most detested foe these days.

Blind Freddy can see that establishing an ABCC is not important enough to call a double dissolution over.

If it was, the Government would go along with Senator Glenn Lazarus, who said he would agree to set up the ABCC if the Federal Government also, at the same time, set up a Federal ICAC.

That is, if the Government amends its ABCC legislation to

'...include corruption across all industries, including banking, finance and politics.'

We all know how much that's needed, with dozens of Liberals having been set aside over corruption concerns. But no, only unions are corrupt according to this Government. 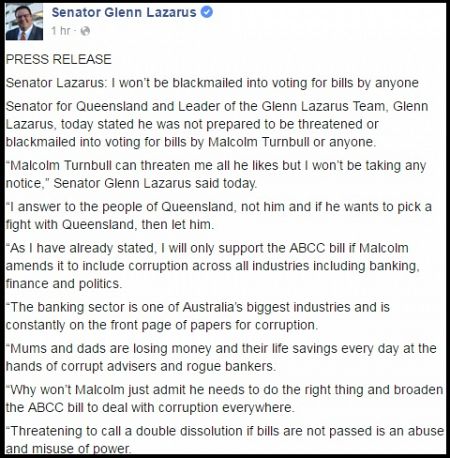 Read the full press release by clicking on the image above or here.

Of course, this is all just a poorly concealed – amateurish, really – ruse by Turnbull and his machine men to clear away the Senate crossbenchers — who have been doing a brilliant job on our behalf in restraining this Government's worst excesses, such as the appalling 2014 Budget. Because they have not done as they have been told, they are seen as a an unrepresentative rabble by Turnbull and his gang. The Liberal Party are used to ruling without impediment and certainly without needing to do anything so unseemly as negotiating with lesser beings.

And so to clear away such impediments, last week the Government joined with its previously most hated foe, The Greens, to pass Senate voting legislation that looks like making it nigh on impossible for micro-parties to be elected to the Senate. This change is perhaps the most important change to our democracy in 30 years but, unlike marriage equality, was not seen as important enough by The Greens or the Government to require a plebiscite.

It's enough to make your head spin!

If this was a court case, one wonders whether these Machiavellian machinations would be seen as an abuse of process. Nevertheless, that is where we are in Australian politics these days. We can only hope the public punish Malcolm Turnbull's mob for his utterly cynical and self-interested approach to governing.

This election may be much closer than most pundits predict.

Malcolm Turnbull is a man of principles. But if you don't like them, he has others.

No roaring start to 2016 for Turnbull as he limps into the NY crippled by #malevolent forces. Double dissolution... https://t.co/3EwHqvovHj