In the wake Melbourne mayor Robert Doyle adject retreat from social media last week, Carl Scrase explains why it is so important for politicians to honestly engage with voters on these platforms.

Last week, I wrote an article titled 'Lord Mayor Robert Doyle's tragic social media failure', where I laid out the facts surrounding the controversial and highly effective '#AskDoyle' social media campaign — that saw Melbourne Lord Mayor shut down his Facebook and Twitter accounts because he was getting to many tough questions about why he didn’t want an independent inquiry into the Occupy Melbourne eviction.

I want to clear up a few things and give some of the politicians that use social media well a pat on the back.

But firstly, I think I need to qualify the use of the adjective ‘tragic’ in the title of the original article, which could be a little misleading. Although Doyle did look a bit ‘tragic’ with his quick exit from the online social sphere, I honestly count it more as a ‘tragedy’. I desperately want all politicians on social media. I am not some punk activist who only wants to disrupt the system. I am searching for solutions about how to deepen our democracy, and how to make it more participatory, direct and deliberative.

It is a tragedy that Lord Mayor Robert Doyle did not enter into the social media sphere with the intentions of being better able to represent his constituents, the people of Melbourne. As the very funny Catherine Devine put it recently:


‘Robert Doyle failed as opposition leader not just because he led the Liberal Party to its worst-ever defeat, but because he's devoid of any original ideas, insight, leadership skills or warmth and he has no connection with the needs of anyone other than his mates from Geelong College.’ 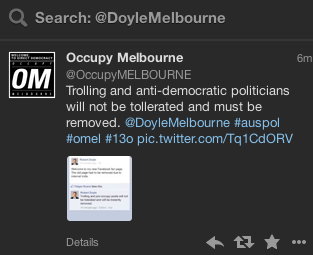 Rumours are that he paid a social media company a huge amount of money to manage his online presence in the run up to the Melbourne elections that are quickly coming up on Saturday 27 October 2012. Robert Doyle never intended to tweet back to people; he paid some company to manage the gritty work of dealing with the public. I feel sorry for the poor social media manager that would have had to face that barrage of questions. The sad thing is that when they deleted that Facebook page, all the questions have probably been deleted forever. Robert Doyle will never see them.

There are some politicians that tweet for themselves. I know, because I started to follow every politician in Australia last week. All of a sudden my tweet stream was full of dull populist comments about the Olympics; the fact that my friends seemed more interested in politics than the politicians worried me. It is amazing how you can read honesty into 140 characters worth of Tweet; it stands out and they make you want to reply. Rob Oakeshott or @OakeyMP on Twitter is one who tweets for himself — his humanity seeping out, with rushed punctuation and honest analysis. 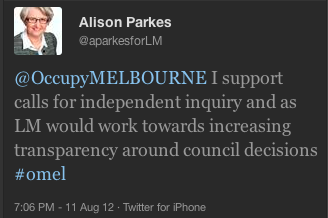 It would also seem that Alison Parkes is a real person on the other end. She has confirmed that she will be working towards transparency if she is the next Lord Mayor of Melbourne. Supporting calls for an independent inquiry.

So that is that, for now. We, the concerned residents of Melbourne invite the Lord Mayor of Melbourne Robert Doyle back onto social media. But please be ready to communicate, that means listening, responding, listening again, responding again. You have some serious questions left unanswered Robert Doyle.

UPDATE: Lord Mayor Robert Doyle has today rejoined social media. He is still, however, not responding to requests for an independent inquiry in the Occupy Melbourne breakup, so Carl Scrase has asked for people to retweet this Tweet: 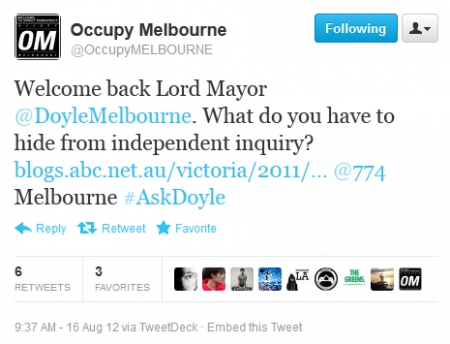 Also, Cast your vote for the following question on OurSay: 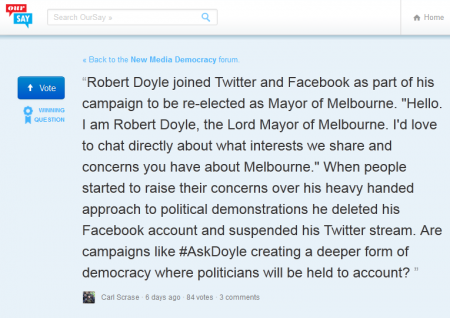