By shutting out disendorsed MP Dennis Jensen from the Liberal's Feedback software, the Party has helped expose to the world its systematic rorting of taxpayer allowances. Sydney bureau chief Ross Jones reports.

POLITICAL DATA MINING has enjoyed a dark place, snug in a privacy netherworld.

But with an impressive own goal the idiots of the Liberal Party just blew it for everybody.

Parakeelia had been happily operating under the radar until the irascible Dr Dennis Jensen, Liberal member for the WA Federal seat of Tangney, was disendorsed in April by pre-selectors of the blue-ribbon seat and its cloud-like safety of 64.67% on preferences.

Understandably annoyed, Dennis laid the blame on the Australian newspaper for digging up a novel he’d submitted in 2007 about people rooting and fighting Indonesians, neither of which is apparently de rigeur in Tangney.

Pre-selectors were offended and Dennis was out. 57 votes to 7.

Jensen had been a Turnbull supporter in the great Abbott war of 2015, so he was well miffed when head office did not step in to save his bacon as it had when he’d previously lost pre-selection in 2007 and 2010.

A few days after his disendorsement, Jensen’s access to Parakeelia’s Feedback software was cut. Incorrect username and password was all it said.

Jensen, still the sitting member for Tangney, had just been denied access to his constituent data base. Feedback doesn’t do talking. No phone numbers, no street address.

So Jensen’s staff emailed helpdesk@feedbackonline.com.au and asked for help. 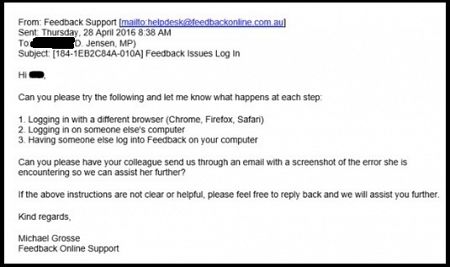 Jensen’s staff tried the options suggested but none worked.

After a few more fruitless emails they began to smell a rat: 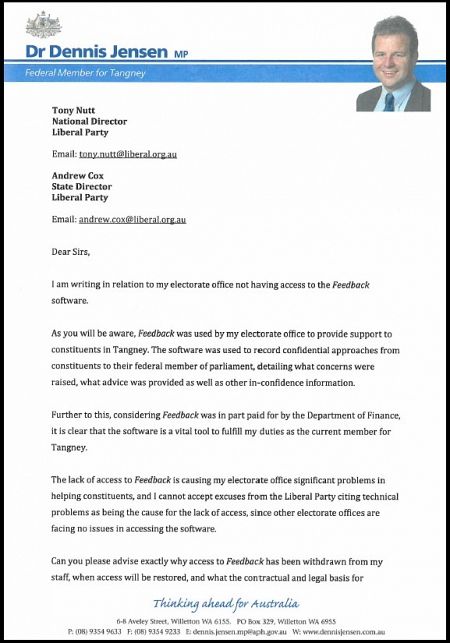 After various moans, Dennis concluded with:

On 9 May, Dennis announced he would run as an Independent and was promptly expelled from the Liberal Party.

But when it came to Jensen, the Libs had crossed a man with nothing to lose. So Dennis spilled the beans on Feedback.

Sadly, when it comes to Parakeelia, no-one has many beans to spill. The operation is S.M.E.R.S.H. and C.H.A.O.S. rolled into one. Tight as a drum.

Except a couple of little things... 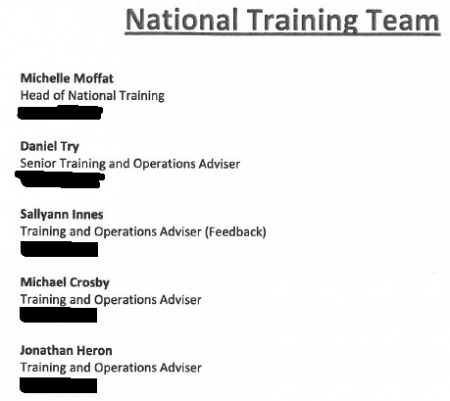 Michelle Moffatt’s LinkedIn bills her as 'Head of National Training' at Australian Parliament. She has a little Liberal Party logo.

Sallyann Innes, a Liberal media advisor, was outed by Fairfax. Her LinkedIn says she is looking for opportunities.

So there is no doubt Liberal staffers moonlighted for Parakeelia.

Jensen paid the $2575 invoice including a 1% Mastercard fee and was issued a Feedback receipt dated 13 October 2015. But his access was denied in April. Two months of denied access equals $425 of Parliamentary allowance paid to the Libs. For nothing.

Not that Liberal MPs get much from Feedback anyway. It’s a bit like an online MYOB in that all the data input work is done by the MP’s office then, via an interface that was quite possibly modern in 1998, that info is sent down the line to the Parakeelia black box. 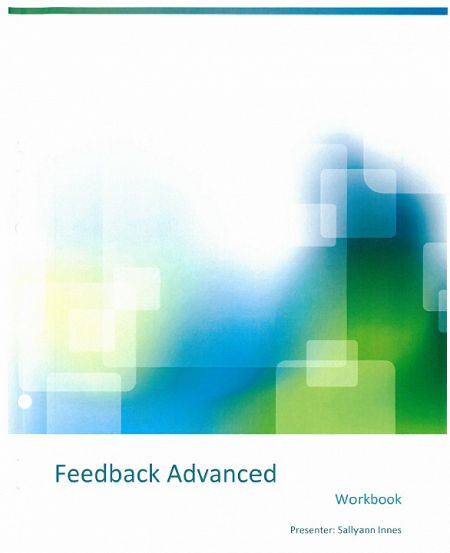 Once in the black box, the data is then the possession of the Liberal Party to do with what it will.

Jensen told IA he reckons the operation, which does bugger all really, was being used by the Libs to

"... double or quadruple drip on the taxpayers to funnel into the Liberal Party."

The Liberal Party may have dudded the wrong man.

You can follow Ross Jones on Twitter @RPZJones. Ross is the author of 'Ashbygate: The Plot to Destroy Australia's Speaker'.