He, she, it, they, are just not that into you. What part of 'not' don't you understand?

We don't need any more opinion polls. We weren't that keen on you in the first place, otherwise you would have won a majority in the last Federal Election.

I'm sick and tired of the argument that we, the people, don't elect the Prime Minister. We do. You and Kevin Rudd in the Kevin 07 Election stood as a leadership team. Your Party was voted in on that frayed ticket.

Political nit-pickers can rave on as much as they like about how we elect a Party and that the Party elects the Prime Minister.

Bollocks. That's not how we see it.

You were an impressive Deputy Prime Minister. No question. And whenever you were the Acting PM, we knew that one day you would make a brilliant Prime Minister. And, of course, a marvellous role model.

But when you stabbed your own Prime Minister Rudd in the back to assume power, that weapon also drew blood from the psyche of the electorate, including your supporters.

You lost our trust. Plain and simple as white bread.

And the ill-hung Parliament and your breathtaking mismanagement, lies, incompetence and capacity to alienate your once loyal admirers have compounded this disaffection.

You are an embarrassment, even to the factional yobs who installed you; testimony that in their venom towards Rudd, they were blinkered in their strategy — and you will forever be a blot on their political landscape as well. 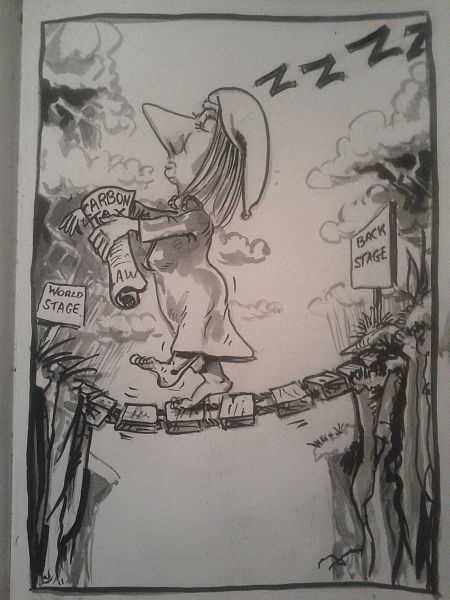 If you had been a loyal Deputy and as close to Rudd as you appeared to be, you could have had a quiet word with him, and alerted him that his Brethren were disturbed with his ill-temper and obsessive workaholism (such an eccentric affectation for an Australian politician).

But really, it was to do with much more than that. I'm not going to rake over cold ash.

Australians don't mind ambition, or even a venal pursuit for power. Yes, we're not beyond sniffing the taller Poppies, but that may be more of a search for perfume.

It is the rancid stench of treachery that makes us dry retch, politically. It was the same with Cheryl

Kernot. The mere thinking of her bedding Gareth Evans is enough to invoke celibacy as a lifestyle.

And Simon Creaning — his histrionic political genes have thankfully put paid to silly speculation that he is leadership quality. As if. OMG.

Julia, you never had your day in the sun. And neither has Australia under your inept stewardship.

Go now, while you can still hobble away on one shoe.