It was Julie Bishop’s farewell. She was Australia’s first female Foreign Minister but what were her achievements in the role?

Cosying up to Saudi Arabia and its war crimes in Yemen? Keeping our lapdogs in Nauru and Papua New Guinea well fed? Downplaying on the global stage the reality of the offshore concentration camps Australia runs on Manus Island and Nauru? Continuing to support the murderous invasions of Afghanistan and Iraq with Australian troops?

Yet her good service to her Party and class did not benefit working-class women. Nor did it win her the top job. She won just 11 votes in the first round of the contest for Liberal Party leadership in August last year. Why is that?

Oh please. Julie Bishop only started having a problem with the flawed concept of “merit based appointment” when she personally was shafted in her own leadership tilt by the same white dudes she’d spent years supporting #notmyfeministidol

The Liberal Party is not yet ready for a woman as its leader, let alone a female prime minister. Given it is a boy’s own club about to become even more blokey after the 2019 Election and given the sizeable presence of 18th Century reactionaries, it is unlikely in the next decade to be ready for a female leader.

Almost 51% of the population is female. Around 22% of the Liberal Party members of parliament are female. For their National Party partners in Government, the figure is 9%.

With the departure of high-profile women like Bishop and Minister for Women Kelly O’Dwyer, the move of Member for Chisholm Julia Banks to the crossbench, and the likely loss of female candidates at the next election, the Party could well end up with much less than 20% female representation.

When the Coalition selects a woman to run, it is generally in a marginal seat anyway. That means that with a small two-party preferred swing to Labor, the Liberals will lose a good number of women. Analysis by David Crowe in the Sydney Morning Herald showed that on December 2018 voting trends, the Liberals could end up with just five women in the House of Representatives after the 2019 Election. That would give them about 9% female representation in the House — if they are lucky.

We should not be surprised by the poor female representation in the Party of the wealthy. The leadership of big business remains overwhelmingly male.

Only 12% of the revenue-generating "line" roles, which are a stepping stone to the chief executive's job, are occupied by women.

Chief financial officers have a reasonable chance to be promoted to CEO, but only 12 % of CFOs are female.

By contrast, women dominate human resources and corporate affairs — two roles which generally will not lead all the way to the top. 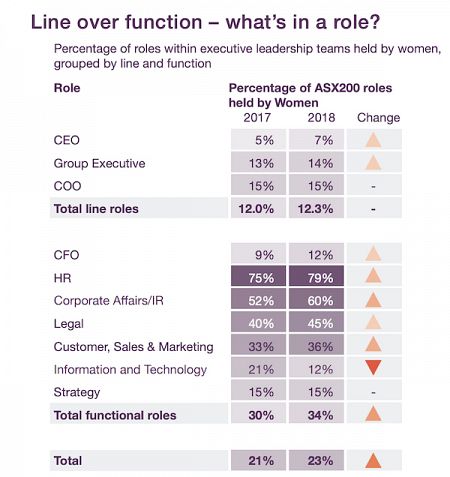 As for the future, Robertson says:

‘Only 7% of top 200 company CEOs are women, and over half of those companies have no women in the key roles that might lead to the top job.’

Even if the Liberal Party followed the lead of the boards of ASX 200 companies, the number of women would still only be 29%. It is the same poor representation of women in business as it is in the Liberal Party.

As Julia Banks and Member for Gilmore Ann Sudmalis have both said, bullying is rife in the Liberal Party. You get the flavour of that in the patronising and patriarchal comments of Nationals MP Andrew Broad about female politicians.

“Politics is ... very gruelling on people who want to have a family and the very nature of biology is that it is tougher on women.”

They not only live among us, these 18th Century troglodytes vote in Parliament.

None of this is to suggest having women running the Liberal Party would make it a better Party. The offshore concentration camps that Australia runs and the gender pay gap would continue, wages would still be stagnant, closing the gap would remain a lie and Australia would still be fighting in the rotten wars the U.S. leads around the globe.

The dance of death between the Liberals and climate change would also continue, unabated. Malcolm Turnbull kowtowed to the climate change deniers. A female Liberal leader – if such a person exists who could become the leader – would, like Turnbull, not have the numbers let alone ideology to do much different. Morrison's love affair with coal suggests that the Government's position on coal is like their position on women — trapped in the 18th Century.

The Government rejects renewables at the very time major electricity suppliers like AGL and mining companies like Glencore are beginning the transition away from coal and towards renewable energy.

The gender pay gap has shrunk to a record low — to a still massive 14.1%! The main reason may be because men’s higher wages are flatlining faster than women’s lower pay. 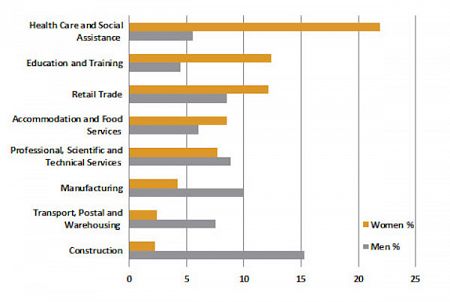 The challenge to patriarchy and exploitation lies in workers striking to improve their wages. As Sally McManus, head of the Australian Council of Trade Unions, said, "unjust laws deserve to be broken".

Imagine if nurses, teachers, waitresses and saleswomen became militant trade unionists like building workers. Equal pay for equal work could become a reality and the stereotype of women as weak and exploitable would be smashed.

Needless to say, the Julie Bishops of the world would likely be on the wrong side of this class divide.

The dramatic departure of Julie Bishop from parliament is being seen this morning as another sign the Liberal Party has a problem with women. #9News pic.twitter.com/6cBBWygEti

You can follow Canberra correspondent John Passant on Twitter @JohnPassant. Signed copies of John's newly released second book of poetry, 'Whose Broken is this? and other poems', are available for purchase from the IA store HERE.