Not only is Julia Gillard being attacked by the Opposition and the media, she is also being undermined by her own so-called supporters, says Victoria Rollison. 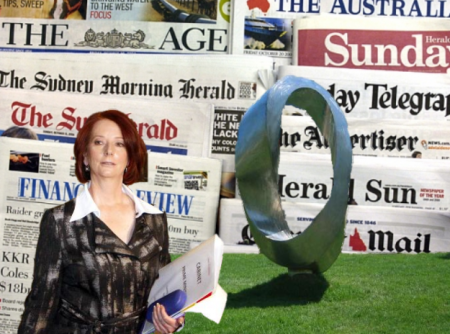 I LIKE TO imagine our present political landscape as it will look in fifty years’ time, perhaps on Wikipedia (the future version of our history books).

I can imagine my grandchildren asking me how, perhaps, the best progressive Prime Minister we ever had was forced out of the job. If she was achieving so much, they’ll ask, why didn’t people support her? I will then have to explain to these innocent little children that it was a crazy time back in the 2010′s. Even those who supported her didn’t support her. It was madness. It was maddening. And it was outrageously ridiculous.

Here’s an example of the madness: Mike Carlton’s article in the Sydney Morning Herald the Saturday before last. He started off the article by saying:


Time to face facts. Time to pull the pin. Julia Gillard is leading the Australian Labor Party towards a catastrophic election defeat, probably the worst in its federal history. For the good of the party and the good of the country, she must quit the prime ministership or be prised out of it.

And he followed this statement with the cheek to say he had a ‘heavy heart’. The rest of his article explains how much he respects and admires Gillard, and outlines how much she has achieved, yet he ends it by again repeating that she must stand down. The first obvious point to make is, if this is someone who supports Gillard, imagine how someone who doesn’t support her would behave. But the aforementioned madness is this: it’s the likes of Carlton who are causing the wave of undermination (I just made that word up) which is causing Gillard’s problems!

He has another go at her in this article on Saturday, implying her problems lie in her communication skills. He’s obviously never watched her on Q&A. And obviously in Carlton’s mind, successful policy implementation is far less important than the quality of a sound bite.

Gillard’s problem is not her communication skills. Her problem is that the mainstream media have made up their minds that they will sell papers and increase ratings by encouraging ‘leadership tensions’, thereby painting Gillard as a failure. But it’s this constant barrage of inaccurate reportage of her ‘failure’ which is causing her failure (low opinion polls), which in turn feeds more media speculation that she won’t be Prime Minster in 6 months.

It’s like a Möbius strip that starts and ends in the same place, and appears to have two sides, but really only has one. Instead of having reports of her failings and successes, there is only one story. Her wins are losses, her losses are losses and, in the end, all you have are some outraged people on Twitter (like me) who feel powerless to end the madness!

Another example of the mainstream media’s magic trick of undermining Gillard in one sentence, while claiming she is being undermined in another, was Leigh Sales’ 7:30 interview of Bill Shorten on Monday night and her interview of our Prime Minister on Wednesday night.

Predictably, Sales quickly went off topic and quizzed Shorten on the strength of Gillard’s leadership. Like a terrier shaking a wet sock, Sales fired off the following questions, completely ignoring Shorten’s attempts to get the interview away from this much travelled path:


“Do you think that it’s a truism that populism matters in politics and that leaders who remain unpopular long enough will eventually stop leading their parties?”

“So why shouldn’t they change leaders then?”

“How would you describe your relationship with Kevin Rudd currently?”

“Did you have talks with him when you were in Washington?”

And so on and so forth. Even when Shorten made the point that the only people asking him questions about Gillard’s leadership are journalists, Sales still didn’t back off and, frankly, embarrassed herself and her profession in the process.

This display was made even worse by a spectacularly ironic question in Sales’ interview with Gillard on Wednesday night. The interview was supposedly about the COAG meeting that day and the National Disability Insurance Scheme. But Sales couldn’t help herself, asking a question which is in the running for the most disrespectful ever asked of a Prime Minister in this country:


“Prime Minister, how does the real Julia feel about these constant leadership mutterings? It would drive anyone up the wall.”

Do you know what drives your viewers up the wall, Sales? You and your journalist colleagues constantly undermining Gillard’s success with unwavering dedication to the cause of ‘leadership tensions’, however inaccurate and disproved the reality of these tensions actually are. You might think you’re getting away with this now, but history will show differently. We’ll look back at this period not with a distaste for our Prime Minister, or a longing to have been represented by someone other than her. We’ll look back with the memory of inept journalists and their obsession with opinion poll sideshows, gossip and innuendo in the place of facts, positivity and truthful reporting about, perhaps, the best Prime Minister this country has ever had.

And sadly, we’ll also look back at supporters of progressive policy who also undermined Gillard’s success by desperately searching for a silver bullet to beat Tony Abbott when, really, if we all united in our support for her, she would beat him easily. It’s madness people! Madness!

(You can read more by Victoria Rollison on her blog http://victoriarollison.com.)