THE MEDIA ON BOTH ends of the political spectrum promote Australia’s Liberal Party as the party of economic management. Pandemics and recession have not slowed the recovery down. ‘Frydenberg spends the bounty to drive unemployment to new lows’, reads one title from The Conversation. The Australian says of their Treasurer: ‘Australia to aim for less than 5% unemployment: Treasurer.’

Finn McHugh of The Australian in April 2021 wrote:

‘Mr Frydenberg said it was necessary for unemployment, which stands at 5.6%, to drop before workers would see their wage rise.’

In May, the ABS reported April’s unemployment was 5.5% or 756.2K people. The last time Australia saw 5.5% under a Labor government, according to the ABS, had been in March 2013, when the numbers were lower at 687K.

In 2013, the workforce was smaller; therefore, 5.5% in 2020 is more significant than 5.5% was in 2013. Perhaps percentage comparisons with previous administrations or even different time periods are misleading.

‘The Australian Bureau of Statistics said the unemployment rate unexpectedly fell to 5.1% in May as the number of people employed surged by 115,200.’

As historically comparative percentages may be inherently deceptive, it is more accurate to state that the ABS reported the seasonally adjusted unemployment figures for May 2021 to be 701,100.

So much for Treasury doom forecasters who said that as the JobKeeper wage subsidy was to expire at the end of March 2021, thousands could lose jobs. Treasury estimated 100,000 to 150,000 JobKeeper recipients could lose employment when the scheme ended.

Despite this, Josh Frydenberg tweeted on 1 June that Treasury confirmed:

‘150,000 Australians have come off unemployment benefits since the end of JobKeeper.’

#BREAKING - Treasury confirms 150,000 Australians have come off unemployment benefits since the end of JobKeeper. Unemployment is down to 5.5%. Employment is higher today than pre-pandemic, ahead of any major advanced economy to see this occur.
The Govt's economic plan is working

As the Treasurer, Frydenberg had some advanced knowledge of the JobSeeker statistics ahead of the May figures being released to the public.

At the end of JobKeeper, the March statistics for people on JobSeeker were 1,167,392 and later in June, the JobSeeker stats released for May were 1,021,880. The difference being 145.5K. To be fair to Frydenberg, he would have received early estimates and that is pretty close. I am not going to quarrel over rounding up of figures. As far as I am concerned, that was a reasonable claim based on those figures.

Mr Frydenberg advised Canberra reporters in mid-June, “Unemployment fell for the seventh consecutive month to 5.1%”. He maintained, ‘The Australian economy is roaring back — bigger, stronger and leading the world’. Not that other economic analysts agreed. Frydenberg was proud to boast of his government’s accomplishments based on these figures. 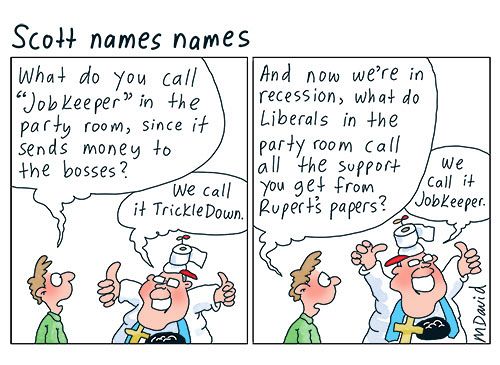 One more time by the numbers?

I want to point out that Josh Frydenberg is intimately aware of two specific sets of figures from May 2021:

These are 320K apart from one another. It almost seems that the Government was paying 320K more people JobSeeker than the ABS was claiming were unemployed. ABS is an estimate based on surveys, so perhaps it was a little out that month. The ABS statistics list as employed ‘the number of people working fewer (or no) hours in May 2021’ or what Roy Morgan refers to as ‘Australians who were working zero hours for “economic reasons“’.

If these non-workers (58,200) are added back, the ABS unemployment estimate for May increases to 759,300 and the unemployment rate rises to 5.5%. That still leaves a difference of 262K people.

Having mentioned Roy Morgan, it should be noted that Roy Morgan has its own reporting of unemployment which for May 2021 was 1,493,000 people. This is 733K above the figure ABS claims even if we add back in the zero-hours “workers” numbers.

According to their spreadsheet, these figures reference only ‘payment for recipients aged between 22 years to Age Pension qualification age’. Payments to ages 15 to 22 are classified as “Youth Allowance“.

ABS unemployment figures are supposed to represent ages 15 to age pension qualifying age. If you add back in Youth Allowance to JobSeeker to make it cover the same age groups as ABS, then the figure for May increases to 1,132,478 people (see Table 3). Mathematically, it is 373K larger than the ABS figures (even after adjusting it for zero-hour workers). This is 360K less than Roy Morgan’s figures.

However, Roy Morgan’s claims are not our government’s numbers. Frydenberg, Treasurer of the nation and the man responsible for the Federal Budget, seems oblivious to the mathematical difference between just the Government’s figures despite quoting other mathematical discrepancies, over different time periods. Perhaps it is some anomalous aberration of May 2021.

With that in mind, I have charted the figures since the early recession. Included are Roy Morgan’s figures, JobSeeker (with and without Youth Allowance), ABS seasonally adjusted and a dotted line representing the zero-hours worker’s discrepancy collected since June 2020 and noted by Roy Morgan.

The ABS stats were always much lower than the Government’s JobSeeker numbers. Although the ABS acknowledges that zero-hours workers are not paid, it dubiously recognised these people as “employed”. There is something unreliable about Frydenberg using ABS’s statistics to measure real domestic Australian unemployment.

Unemployment seems to have declined if you consider the most inaccurate statistical method for counting the unemployed.

However, the ABS methodology is apparently flawed when you consider what is and is not evaluated when it comes to measuring employment:

ABS’s inaccuracies are highlighted by real numbers when you realise that the Government is currently paying more people on JobSeeker than they are contending are unemployed.

So the question should be what statistical gathering methodology does incorporate the multitudes being paid JobSeeker, as well as those managing without welfare because :

That leaves us with Roy Morgan’s statistics that illustrate unemployment has increased in May after JobKeeper was discontinued. As JobKeeper stopped from April onwards, it was always unlikely that April’s statistics might reflect that. Unemployment layoffs would not have occurred instantly, nor would wage payments supported by JobKeeper evaporate immediately as processing these continued till mid-April.

ABS has a one month delay requisite to its data collection, so it is no surprise unemployment appeared to fall in May. The Government rightly assumes that few follow why their claims about ABS numbers do not reflect our domestic unemployment. Nor how only once, briefly, in the last year did unemployment fall below 10% in April (9%) and that in May, 10.3% is a more accurate assessment of Australian unemployment. Recall that Treasury suggested that unemployment might rise as much as 150K. Roy Morgan’s figure for April was 1,307K and May was 1,493K generating an unemployment rise of 186K, which is far more consistent with Treasury’s expectations.

The question remains: why does Josh Frydenberg promote these obviously fallacious numbers? He isn’t stupid, nor is he deceived or deluded. He is well aware of the numbers from these divergent sources as he has not only referenced them but made sound mathematical calculations based on subsets of these numbers. He is our Treasurer and he has to be aware that the Commonwealth is paying more people on JobSeeker than the ABS is claiming are unemployed.

There is, therefore, only one conclusion left about his economic assertions and I leave that to the reader to discern.