INDEPENDENT AUSTRALIA is a popular, progressive, non-partisan publication. Australia’s best, we like to think. And given we are progressive, many of our readers are Labor Party or Greens members or supporters. This means that whenever we publish an article or editorial that could be construed as critical of those parties, there is, inevitably, a backlash.

We are used to that. However, because we are non-partisan and especially because we are progressive, when we see either of these two parties stray towards conservatism, we feel obliged to report this — backlash or not.

And so, today, we need to record now our concern about powerful factional forces within the Australian Labor Party pushing it towards reactionary, regressive, redundant conservatism.

The following information comes from unimpeachable Labor Party sources. Sources concerned about where Labor is heading. Who realise that, as Labor takes stock after the Party’s devastating May election defeat, now is the time to push the party back onto the progressive path — or it never is. Because Australia does not need both its major parties to be conservative, irrespective of any backroom boy’s seductive yet specious strategising. Or despite any siren calls from the deceitful and deceptive Murdoch media cartel.

Recently retired Labor Senator, progressive torch-bearer Doug Cameron, had strong words to say about all this on Facebook last week:

The cosy relationship between the pseudo intellectuals of the right of the ALP and the Murdoch press continues unabated.

Interviews, leaks and “exclusives” are provided to the Australian in an attempt to diminish the progressive policies Labor took to the last election.

In his latest snuggle up to Murdoch’s rag the Australian, Nick Dyrenfurth, executive director of the John Curtin Research Centre, attempts to conflate the need for working class voices in the ALP with a move to the right.

This comes at a time when the Morrison government is being exposed for its lies, misrepresentation and internal divisions.

Sycophantic knee bending to Murdoch will not advance Labor’s task of winning the next election.

Dyrenfurth bemoans that those of a “conservative outlook or disposition are increasingly made to feel unwelcome in the party”. My experience as a rank and file member of the party for over 40 years, a union official representing blue collar workers and a Labor Senator, is completely at odds with Dyrenfurth’s assertions.

Dr Nick Dyrenfurth is, arguably, more to the right than many in the Liberal Party. He is an opponent of climate change action, anti-feminist, pro-Murdoch, fanatically pro-Israel and, in general, as Doug Cameron says, a strong proponent for Labor becoming a more conservative party.

Poor old John Curtin must be spinning in his grave.

Cameron called out the Labor Right’s “embrace of neoliberalism”:

The right wing, conservative embrace of neoliberalism by some in the party is a major impediment to engaging with working class Australians.

Embracing IR reform, “free trade” without job protections has diminished the countervailing power of the trade unions and left many of our traditional base exposed to exploitation and wage stagnation.

Dreaming up reasons to move even more to the right will not restore Labor’s credentials with disaffected and disadvantaged working class Australians.

The policies we took to the last election should be defended and promoted. Capitulation to neoliberalism will not save the ALP.

There are many options for “conservatives” in the party. They have a disproportionately strong voice and an influence that has created many of the problems we now face.

They are out of step with the rank and file of the party. Moving further to the right would be politically dumb and economically and environmentally counterproductive. It would reinforce inequality and weaken the party.

In the opinion of this publication, Cameron is correct. It was not Labor’s progressive policies that lost it the election. It was lost through a disappointingly shambolic, incoherent, inept and disorganised campaign. Where the Coalition had a short and simple slogan: “The Bill Australia couldn’t afford”, the ALP had no clear and consistent message to cut through to voters.

Yet, Labor again look towards the selfsame sort of overrated backroom boffins and buffoons, like Dyrenfurth, who were the architects of Labor’s abysmal result in May. A conspiracy theorist might posit that this was the intention of these Liberal Party sleeper agents all the time. Who now look to finish the job. But more likely these birdbrains are just fucking useless. Throwing out good policy just because they were incapable of selling it.

As Cameron concluded, it is time for progressives to stand up and be counted:

It’s about time progressive voices within the party challenge this neoliberal nonsense and defend the policies that would have addressed global warming, put a roof over peoples head, ensured access to high quality public education and health systems and promoted the TAFE system for the working class.

Maintaining our progressive policies and exposing the vacuous agenda of the Coalition while building a broad based understanding of the greed and incompetence of the Morrison government would be a better way forward.Where are the Parliamentary voices on the left as some on the right promote abject capitulation?

Well said, Dougie. Labor needs more strong voices on the left to rail against and reject such craven rightwing capitulation.

Doug Cameron is not alone in expressing his concerns about the John Curtin Research Centre (JCRC). A so-called think tank, which appears to do no research, but rather spends most of its time ranting about progressives and their policies.

More disturbing even than this, perhaps, the Labor insider told IA that the JCRC also exhibits a strong streak of sexism:

The executive director [Nick Dyrenfurth] recently tweeted “Get In The Bin” in reference to Emily’s List Australia. This has highly offended many in the Labor Party. Emily’s List represents women in the Party and has been instrumental in the affirmative action policy which sees Labor have as close to 50% female representation as possible. This misogynistic statement came after Dyrenfurth had a less than subtle dig at affirmative action in an opinion piece published in Fairfax.

In regards to his [Dyrenfurth’s] own board of management for JCRC, there are 11 members plus himself. Two of these are women — approximately 16 per cent

The women the John Curtin Research Centre that make up the 16 per cent of the management team are quite an interesting pair.

One is Clare Burns, the new state secretary of the Victorian Labor Party. You may have seen reports that she is the chief of staff for Victorian Premier Daniel Andrews in Crikey recently, however that is completely false. Despite many people letting Crikey know about this mistake, they have yet to correct their woeful research.

Clare Burns is, however, a member of Emily’s List — the orgainsation Dyrenfurth wanted to see "in the bin". Did I hear someone say mixed messages?

The other female member of the management team is Mary Easson, a former Labor MP. Easson is now a lobbyist for an Israeli arms manufacturer. Let's hope that pays well. 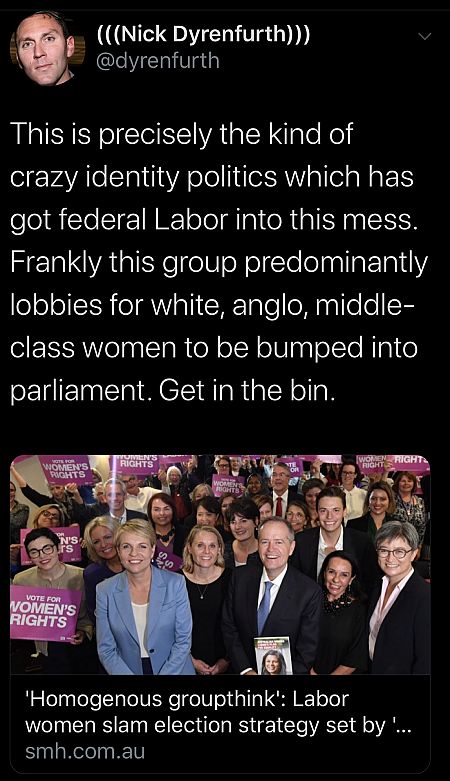 According to IA's Labor source, the JCRC is essential the Labor Party’s internal Israel lobby group and has been embroiled in scandal since being launched by Bill Shorten in 2017:

The John Curtin Research Centre has been mired in controversy since its inception. In 2018, it was revealed that some of its funds were being provided out of some MP’s allowance for newspapers and magazines, and so on.

Despite the JCRC publication, The Tocsin, being free online, taxpayers were being billed for these subscriptions at $1,000 per year per MP.

The MPs included Mike Kelly, Michal Danby, Peter Khalil, Tim Hammond and Senator Kimberley Kitching. The JCRC is basically Labor’s pro-Israel lobby. The name itself is ironic, John Curtin would be less than impressed with much of their ideology, they perform no research and don’t actually have a centre (street address).

Note, Independent Australia is not anti-Labor. We are simply pro-progressive. If Labor decides to swerve towards conservatism, we will never hesitate to put pressure on it to return to promoting progressive policies.

Because the last thing Australia needs is both of its major parties being conservative. Conservative policies are killing the planet and its people. Enough is enough. 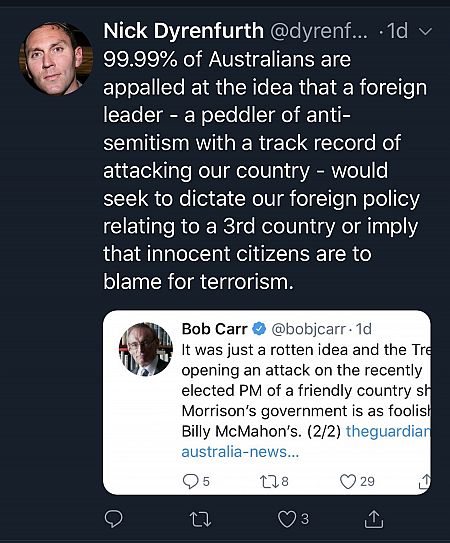 This editorial was originally published as part of Independent Australia's weekly newsletter, which is normally only available to paid subscribers. It takes less a minute to subscribe to IA and costs as little as $5 a month, or $50 a year — a small sum for superb journalism and many extras.