Growth and jobs: The Coalition's plan for recession (Part 2)

The Coalition's mantra is "jobs and growth", so why are their policies setting the economy on course for recession? John Haly reports.

[Read Part One: Jobs and Growth]

As already outlined in Part One, in examining the mantra of the Coalition’s claim to be creating “jobs and growth”,  jobs in the economy are in sparse supply. Indeed, when you consider the vast numbers of under and unemployed in our economy, as well as the numbers of foreigners eligible to look for and consume jobs in the market, jobs are relatively non-existent. But if there is potential for economic growth in the Australian market, albeit little hope for millions of Australians to find suitable work in the short term, then perhaps there is hope for the long term holds.

Perhaps, given enough time, the Coalition – who pride themselves in being the economic managers – can pull a “rabbit out of the hat” and grow the economy to generate more job vacancies for the unemployed than the rate of expansion of the workforce. But for now, they are struggling to do this. 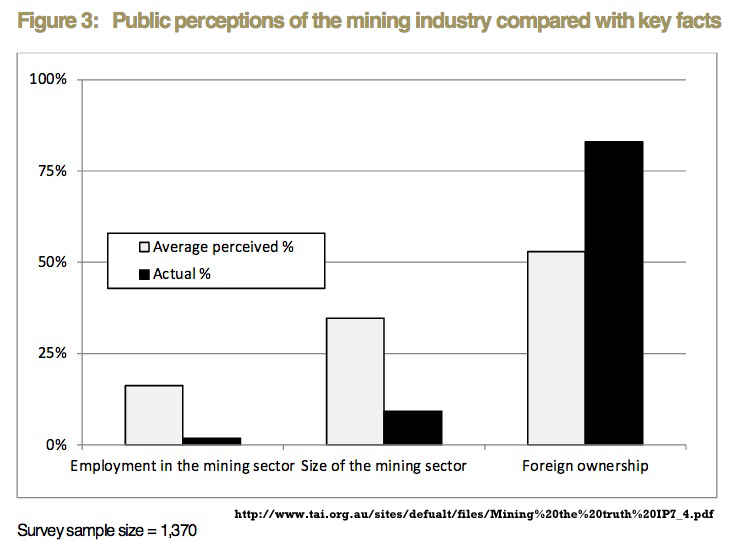 The discrepancies between perception and reality in mining (Source: The Australia Institute)

So, with the Coalition supposedly focusing on “jobs and growth”, exactly what infrastructure is the Government committing to, to creating growth in our economy?

There is a big focus on one of the large donors to the LNP — the mining industry. Mining reaps the benefit of our largesse in revoking emissions trading and mining taxes, and spending billions subsidising fuel, exploration costs, grants and cheap loans — all of which results in profit margins well in excess of these subsidies, most of which goes overseas, since mining is 83% foreign owned.

Despite the big sell of the benefits of mining by the government – which the public largely buys – the reality is quite different. Mining investments are a diminishing industry with declining jobs — now down to 2% and with a negligible contribution to GDP. In fact, nothing at all in the Dec 2014 quarter.

As jobs were disappearing from mining, the expected pickup in construction did not occur and had, in fact, begun failing us as well – falling 3.6% in the 2015 December quarter, with every expectation of it continuing to weaken. Any new mines – despite exaggerated claims to the contrary by the coalition about the Adani mine – will take up very small numbers of our unemployed, as demonstrated by Rod Campbell in The Australian.

So, no growth in these industries, unless you are talking about growing workplace deaths, in which case the reintroduction of the Australian Building and Construction Commission will no doubt prove a boon. The previous ABCC regime of the ABCC saw dramatic rises in construction industry deaths under the Howard Government, because of the ability of the construction union to enforce safety standards being diminished. There was a very quick drop off of deaths once the ABCC was abolished. This would, of course, also be a small boon for employment as more workers dying will increase vacancies in the construction industry.

#Aus
If Turnbull wins workplace deaths will rise, courtesy of his #ABCC...#Auspol#Ausvotes pic.twitter.com/VRJKSV1eWN

So, while mining and construction may not not growing, and are actually shedding employee numbers, the rollover of employees through implementation of ABCC style legislation may be of benefit to the unemployed — should they survive the experience. The ABCC certainly has no powers to combat corruption, so there must be other reasons for its existence. The Government’s desire to expand this style of legislation into other industries, such as through the Registered Organisations Bill, would potentially expand businesses capacity to roll through the unemployed as they "dropped off", while not necessarily contributing to real growth of the businesses in question or addressing any union corruption issues.

Exploring other industries, we might note the government have undercut our manufacturing industries as car manufacturers will bleed 200,000 jobs and as much as $29 billion in lost economic output. The steelmaking company Arrium, which employs one in ten people in the South Australian town of Whyalla, just went into administration in April this year (2016). The SPC fruit canning company only needed a tiny fraction of the money we handout to mining to protect the industry and jobs. The Manufacturing Worker’s Union had no success at convincing Abbott to adopt a less hard-line approach to our canneries.

RET and renewable energy changes from both Abbott and Turnbull have devastated a growing industry that had a vibrant future. This is evidenced by the progress established in multiple European countries who despite many having less sunshine & wind access than Australia, are contributing significantly to their energy needs and in Norway’s example exceeding their energy requirements from renewables.

Proportion of electricity generated from renewable sources in Europe

The change from public transport initiatives to road building means people are more dependent on vehicles at a greater cost to the consumer and the environment. (Perhaps Joe Hockey will eventually be right after all and poor people won’t be able to afford to drive cars.) Other OECD countries have developed public transport that keeps travel costs low by clever development of properties around the transport hubs (school, hospitals, shopping centres and so on). The lack of investment in public housing in the inner city means disenfranchised people are more remote than ever from employment opportunities, health and education services. So no growth in transport or city building infrastructure, except for the most expensive transport options for the public.

Not coughing up on health and education

Health follows wealth and employment follows education, so the poor or inadequate infrastructure development in these areas will equate to a failure to invest in human capital. This represents an appalling shortsightedness, at a time when China’s tertiary sector, Singapore, South Korea and Japan (and, in time, Indonesia) are making dramatic consolidations around trade and education. They are gearing their workforce up to be able to participate effectively in 21st Century technology economies, while Australia’s professional full-time occupations are declining, according to the Graduate Careers Survey from the CGA.

As degree qualifications become more expensive, the long-term outlook is not optimistic. Integral to this is Australia creating an national broadband network that has us slip from 30th in the world to 60th in internet speeds. The educational advantages of online learning for a country like Australia, where distance education is a vital public requirement, is undercut by our pathetic internet capability.

Under @TurnbullMalcolm, Australia has dropped to 60th in world for internet speed below Indonesia & Thailand #AusPol pic.twitter.com/wU2TGyzGjv

Moreover, dismantling the Gonski funding for our children reduces the future level of education for our nation. It’s simply short-sighted. From education to health, the prognosis is also heart stopping. Given the reduction in funding by removing previous indexing arrangements for hospital funding to “save” $80 billion, the Government’s commitment to health in the midst of an ageing population with a corresponding need for increased healthcare, is counter-productive. If you want your population’s retirement age to be delayed, as Howard, Abbott and Hockey suggested, then you need to cater for rising health costs — not diminish them.

So, no growth in health and education.

Under the Coalition, Australia has dismantled active market labor programs by creating an ineffective “work for the dole” scheme, where people are forced to paint community halls and rake garden paths. This semi-skilled, meaningless, busy work is not dissimilar to the enforced programs you see in North Korea. It is, after all, a means by which people are forcibly employed at below minimum wage rates with penalties extracted for failure to comply. Neither the Australian scheme not that of North Korea results in fulfilling full-time work.

Tourism and agriculture on holiday

Tourism and agriculture, however, are key growth areas for Australia. There are 267,000 tourism businesses in Australia. Outside of the casino, club and hotel industry, most are micro-businesses and, therefore, too small to afford to donate to the Liberal Party. Given mining can afford to make sizable donation to Coalition coffers, it is no surprise that it is given a priority over tourism and agriculture.

Is Malcolm Turnbull's great plan for tackling climate change to use the Clean Energy Finance Corporation to build... https://t.co/hD4MxGa9Vl

As the Australian Institute points out:

'The expansion of mining causes a contraction in non-mining industries, particularly manufacturing, tourism, agriculture and education. This results in business closures and job losses.'

Recent Government decisions regarding tailings dumping on the Great Barrier Reef and the Shenhua mine’s resumption of farming land in NSW bear these assumptions out. Support for these industries by this Government is definitely not a priority.

Given the history of ongoing falls in consumer and business confidence, apart from a temporary boost at the change of Coalition leadership, there has been too little evidence of worthwhile growth in Australia. In fact, if it were not for the way we account for defence spending, by only accounting for all previous payments as one lump sum presumed to be paid in total on the final payment for an “item”, Australia’s economic outlook would be dire. Change the accounting convention to recognise the defence payments when they were actually made and Australia would officially be in recession.

Unemployment is a pernicious problem not being dealt with by a Government busy dismissing public servants and stifling growth industries and their support mechanisms, such as renewable energy projects, as well as undermining manufacturing in this country and reducing funding for numerous not-for-profits (such as the ABC, the SBS, CSIRO, the Climate Commission and dozens of expert advisory bodies). All of these result in massive retrenchments, increasing the stress levels of employees in these and related industries resulting in the aforementioned reduction in economic growth that this country is actually experiencing.

Welfare for the wealthy

So, given the Coalition’s reluctance to tax the wealthy or large businesses who contribute significantly to the Liberal Party but next to nothing in taxes to the Australian people’s health, wealth, infrastructure and even employment, where will we find the revenue to support Australians?

Who told you this photo was a good idea? Did Chevron's 180k of donations make up your mind? #questionsformalcolm pic.twitter.com/0ONvlyJorl

The continued reluctance to pull back the massive welfare subsidisation of companies that contribute so little to our GDP – such as mining & construction – is deeply inegalitarian when one considers how little welfare we supply to Australians who have real financial needs. The service sector contributes 68.7% of our GDP, but when government policies either do little or actually inhibit the non-finance segments of it, then how do we build national revenue?

An economy where it is no longer possible to raise sufficient revenue from income tax because people don’t have jobs, explains why the Coalition is so desperate to reduce services to the community.

“Jobs and growth” has been the mantra of the Government for the last three years. However, worryingly, it has resulted in such poor results, we risk further economic collapse. And, in the next financial year, we may not have fully paid off the next defence purchase in time to hide the reality, that Australia, is in a recession.