Well, the headline may as well have said that, for all the truth contained in the story...

Yes, that’s right folks, Steve Lewis – the man journalists look down at and only Santa’s elves look up to – is back at it again; never letting little things like facts mess up a good smear.

If there was a raspberry awards for journalism, Steve Lewis could easily claim a prize.

You may recall Steve from the OzCar/Utegate affair, in which forged emails by public servant Godwin Grech effectively put paid to Malcolm Turnbull’s leadership of the Liberal Party.

You may also remember Steve from the Ashby and Slipper saga, and how he dived right on in and helped the story along, telling Ashby via text at one point that

Or you may remember him as the man who churns out stories without any real evidence about the AWU smear campaign.

This time, Lewis has Craig Thomson in his sights ―and I think it’s safe to say he suffers crooked vision, based on his understanding of the facts.

Clearly, when Craig Thomson made his parliamentary address way back in what seems like last century, Lewis doesn’t think that there was enough dissection of every word, or media scrutiny of the speech, and now thinks he might have a bit of a crack at it.

Steve Lewis cites new documents that have come from with Fair Work Australia – you know, the place that Kathy Jackson's fiancé is Vice President – but Lewis doesn’t share this “new documentation” with us, the gullible readers. Lewis doesn’t even have a reference to where it might be posted on the News Ltd website ― I guess, because it isn’t.

Steve Lewis seems to think that whatever piece of trash has blown out of a window at FWA and landed in his lap should be taken as gospel truth. Not unlike Tony Abbott's excuses for the slush fund he ran that ended with Pauline Hanson going to jail so you didn’t get a chance to vote for her ― gospel truth indeed. Welcome to democracy in action, Coalition style.

Fair Work Australia have made such an utter dogs breakfast of this case that anything that comes from FWA that relates to HSU matters should be taken with a grain of salt the size of the Rock Of Gibraltar .

FWA finally ended up having to have an independent inquiry into their own investigation; this was after their investigation appeared to be tainted in the extreme. The findings of this enquiry by KPMG made the entire investigation seem a farce. FWA Vice President Lawler, who seemed happy to get involved in the union matters, accessing the HSU network, making complaints to police, having his children work for the union, being dialled into union meetings – and so on and so on – suddenly didn’t want to be involved when it came to an inquiry his own organisation launched, refusing to co-operate with requests to hand over electronic equipment.

[Read the KPMG review of FWA.]

So anyway, what are Steve Lewis’s big claims?

Lewis claims that “new” FWA documents show that Thomson “never put” suggestions to FWA that it seek video footage from brothels. They also raise doubts over Thomson’s allegations regarding a set up involving Marco Bolano.

So let’s have a look at some of the evidence.

Below is a link to a part of the transcript of the FWA interview that Craig Thomson had with FWA investigator extraordinaire Terry Nassios. Terry, you may remember, fled the country once the investigation was made public, but upon his return was hauled into a Senate committee to try to explain how he had any credibility at all after such a mess of an investigation. What was left of Terry’s credibility was then destroyed by the aforementioned KPMG enquiry into his so-called “investigation” ― the FWA investigation many have described as a “witch-hunt”. 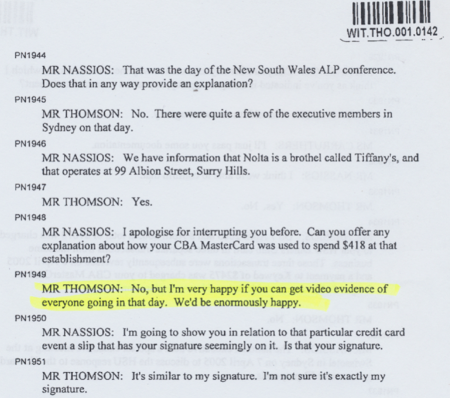 As shown in the highlighted section, Thomson clearly refers to the possibility of video footage being obtained. Thomson states in relation to questions over a brothel:


“I'm very happy if you can get video evidence of everyone going in that day. We'd be enormously happy.”

This is from the FWA transcript, not a document that has not ben produced that has fallen into the lap of some reporter who has made a career of doing the dirty work of the Coalition in both the AWU smear campaign, and of course the Ashby matter.

On the Bolano matter, Lewis claims that:


“The watchdog (FWA) also takes aim at Mr Thomson over his claims that he was threatened and set-up by a union rival, Marco Bolano.”

That sounds like a rather pointed claim Mr Lewis ― but you back it up with zip, absolutely nothing. You don’t explain what part they “take aim” at, or quote a source in any way shape or form. This is just an utter nothing statement. This statement is like sitting on your child’s bed to read them a book, starting out with “Once upon a time” and then stopping, telling no more story and leaving one pissed off kid.

You open up dialogue about someone “taking aim” and leave us all hanging because you have nothing else. If this is taking aim, I’d suggest to Lewis spending more time at a circus sideshow shooting at metal ducks with a bent rifle ― he may actually learn something about taking aim.


I am happy to send you FWA document

It details the matters in today's article

You need to take it up with them

That is it. That was Lewis’ response in full.

What remarkable concern from a journalist.

Considering he was responding to the publishing of false and misleading information across all the News Ltd press, with the exception of The Australian, with his name attached to it ― you’d expect a little more of the care factor. What utter arrogance and total disdain for anything that doesn’t suit his agenda. The offending article says that Thomson's lawyer Chris McArdle the night before, that much is accurate. McArdle was contacted at approximately 7pm the night the story went to press. It is safe to say McArdle was contacted on or around the deadline bell, meaning the call was merely to cover Lewis’s back, rather than to seek information for a story that would clearly have been written already. This is the oldest trick in the book.

If mainstream media wants to know why it is losing the trust of the public and why newspaper sales are plummeting, they can weep bitter tears and point to the internet ― or they can look to the all too familiar behaviour above for clues.

Anyway, Thomson has always claimed that the FWA investigation was not being conducted in a fair manner, and given what we know now ― who can blame him?

Below is a link to a copy of a letter Thomson's lawyer sent to FWA President Bernadette O’Neill which addresses some of these concerns. It makes for interesting reading, particularly the part about bias. For privacy reasons I have removed the names of the individuals that FWA did not interview, but having seen the names myself, some of them are extremely relevant and held high positions within the union.

As for Marco Bolano’s credibility, it is fair to say that it is somewhat tarnished. No matter how he might like to try to clean his image up, and no matter how many times Kathy Jackson tells us he is clean, there is an old saying: “you can’t polish a turd”. Some may think you can roll one in glitter, but it still emits a stench. Bolano is certainly no Glittering Prize, although some have made allegations of Simple Minds.

In the recent campaign for the HSU Number 1 Branch election, Bolano tried to have his main rival Diana Asmar excluded from the election, after someone conveniently tampered with her financial records in the unions database. This was eventually overturned in court and only ended up delaying the election. Unfortunately, the evidence in the case cannot be made public as the case has yet to be officially closed; all we know from the case is that witnesses say Bolano was berated by the judge and Asmar was cleared to run.

Since then, there have been allegations of Bolano stalking and threatening his rival, to the extent that an intervention order had to be placed on Bolano to keep his distance from his female opponent. In an article in the Fairfax press, details of claims of mail theft and tampering, funding accusations, and even a bizarre hit and run with a car complaint show what a disgraceful campaign is being run.

Craig McGregor, who was recently elected as Secretary of the HSU Number 3 branch was given a taste of what to expect should Bolano win in the Number 1 Branch elections.

McGregor, who took over from union turncoat Kathy Jackson, went into the offices to find he had no computers ― and not even any chairs.

He did, however, have two things ― a mountain of debt, care of his predecessor, and an interesting bag (pictured to the right), which was left under the desk of his election rival ― Fleur Behrens. Behrens was the Jackson faction candidate, and it is clear that she has picked up the rumoured Jacksonville habit of destroying documentation.

Those still to vote in the number 1 Branch election, an election which has become an absolute atrocity that has left members bewildered, and left the public with about a billion more reasons to think unions are dodgy, are hopefully taking note of all this reprehensible behaviour from the Jacksonville crew.

If members want more of the stand-over tactics, the threats, the wasted money, the rorts, the poor representation, the bully boy tactics, the bad publicity, and the Jackson influence that virtually bankrupted number 3 branch, or if they like being part of the first Union in the State to sell out members’ entitlements to the Victorian Coalition Government, or being part of the Union that sold its members out the cheapest to the Coalition government, then vote for anyone on the Bolano ticket.

Alternatively, if you think it’s about time you had some representation and someone with your interests at heart, I’d be voting for anybody who is not on the Bolano ticket.