When controversial Israeli apologist, Colonel Richard Kemp, was asked to speak at Sydney University, students protested. Dr Evan Jones seeks to sift through the claims and counter claims of anti-Semitism and violence which have since ensued.

The British army veteran, Colonel Richard Kemp, is an unabashed supporter of Israel and its actions. It is presumably on that basis that he has recently visited Australia, courtesy of sponsorship by the United Israel Appeal.

Kemp was invited to talk at Sydney University on 11 March this year. His chosen title was ‘Ethical dilemmas of military tactics in relation to recent conflicts in the ME: dealing with non-state armed groups’. The talk was disrupted by pro-Palestinian demonstrators. Numerous people have been questioned about their possible breaches of the University’s code of conduct, the demonstrators initially being accused of anti-Semitism.

“Condemning the disruption of his lecture at the University of Sydney earlier this month, Kemp stated: ‘Dress it up however you like, that was an attack by non-Jews on a group of Jews.’”

Strange that only Jews should be interested in such a seemingly generalised topic. Kemp’s version of the event, in a letter of complaint to Sydney University’s Vice Chancellor Michael Spence, is at Online Opinion (17 March). As for his subject matter, Kemp claims there that the ethics of state military action should centre on the principles of “necessity, proportionality and discrimination”.

The event received significant media coverage, particularly from the Murdoch and Australian Jewish press — universally expressing outrage at the disruption. The stance is readily summarised by Glen Falkenstein (17 March).

Falkenstein is a "policy analyst" at the Australia/Israel and Jewish Affairs Council, lobby group for a foreign power. Curiously, Falkenstein’s article appeared on the ABC Religion & Ethics site. What does a lobby-sourced article have to do with either religion or ethics?

Colonel Richard Kemp, the man that Sydney University thinks should be immune from protest: http://t.co/5LLa97spkj

New Matilda has been the dominant outlet for those supporting the protestors, in particular for Michael Brull, on 18 March and on 6 April, and Nick Riemer, on 19 March and on 7 April. Students involved in the event proffered statements to the student newspaper, Honi Soit (25 March).

The fierce critics of the disruption concentrate on the figure of Jake Lynch, in the audience at Kemp’s talk. Lynch is the Director of Sydney University’s Centre for Peace and Conflict Studies. He is a supporter of Boycott, Divestment and Sanctions against Israel because of the impasse of “peace talks” — that failure widely attributed to Israel, as outlined at New Matilda (3 June 2014). Lynch is a general critic of human rights abuses, making him an ideal Director of CPACS.

Lynch has been opposed to his University’s links through fellowship schemes with Israel’s Hebrew University and the Technion — Israel Institute of Technology, both complicit in Israel’s ongoing Occupation of Palestinian Territories and in human rights abuses.

Lynch declined to support a fellowship application for a Sir Zelman Cowen Scholarship by Hebrew University academic Dan Avnon to Sydney University’s Institute for Democracy and Human Rights. For this decision, Lynch was pursued in the Australian courts by the aggressive Israel Law Centre Shurat HaDin for breaching the 1975 Racial Discrimination Act. This legal action has since failed.

Lynch has consistently noted (ignored by his detractors) that his decision was based on CPACS’ principles and that opposition was to institutional linkages between Sydney University and compromised educational institutions elsewhere. Here is Lynch responding to Antony Loewenstein (7 November 2013):

“I have made it abundantly clear from the start that the policy is aimed at institutional links. … I believe the University of Sydney should revoke its part in the Sir Zelman Cowen and Technion fellowship schemes, and I reserve my right not to collaborate with them.”

And, at greater length, on the Sydney Peace Foundation’s site (7 December 2012).

A “lively” exchange of opinions on the Kemp lecture disruption took place on the internal email system of Sydney University’s Arts Faculty, the exchange lasting between 20 April and 10 May. There was much discussion around the hallowed principle of freedom of speech (and of possible limits), and of the right to protest.

But latterly there arose the claim that not merely the protest but the views of academics who did not condemn the protest out of hand (with presumed links to various disreputable personages) was all about anti-Semitism. Others replied that, no it wasn’t, at which ticklish point the Arts Dean requested a termination of the exchange.

Generally lacking in the exchange was the context of the appearance of Richard Kemp on the campus of Sydney University. There are significant principles involved behind Kemp’s appearance, the disruption of his lecture and the University’s investigation of that disruption.

The freedom of speech issue and access to divergent opinion loom large. But hypocrisy is at the heart of the Israel cheer squad’s position.

The lengthy account that follows may appear parochial, but the dispute at Sydney University is representative of comparable scenarios occurring at academic institutions across the Western world. 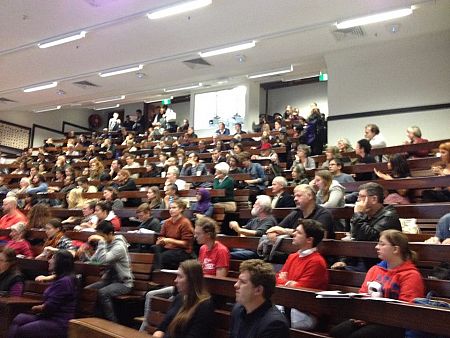 Israel and its cheer squad

Can we revisit the character of the state for which Mr Kemp feels so much affection?

Israel was conceived, forged and is maintained on the basis of ethnic cleansing.

Regarding Israel’s inglorious birth, the nakba has been strategically white-washed, even though reported contemporaneously. Its acknowledgement has belatedly been “legitimised” in mainstream circles by establishment historian Benny Morris — legitimised historically, via Morris’ scholarship, and as a political necessity, via Morris’ personal predilection. Morris has since repented his "sins" of scholarship, but his equivocations have rendered his postures irrelevant.

An exposure to the phenomenon and its context can be had in a handful of soberly-written pages from Ilan Pappé’s A History of Modern Palestine. Nur Masalha’s The Palestine Nakba demonstrates that, after Arab populations had been massacred or expelled, the Israeli state has engaged systematically in the eradication of the record and memory of their prior existence.

Ethnic cleansing proceeds on a daily basis. The Occupation (including that of Gaza) and the settlements are contrary to international law. No matter, Israel considers itself de facto above the law.

One notes that Shurat HaDin, that ne plus ultra of juridical integrity, fresh from its failed pursuit of Jake Lynch, recently organised a conference seeking a means by which Israel’s criminal actions will henceforth be above the law de jure.

Israel has elections to determine not whether further ethnic cleansing is to be pursued, but rather its character and timing. All players that matter are of one voice that lebensraum is the name of the game.

The world is beset with multiple bread-and-butter tyrannies, readily recognised as tyrannies. Many of these, we (the West, the “good guys”) are happy to have as friends. Some of these tyrannies were established by us “good guys” in the first place — Saudi Arabia as exemplar. Whereas some of these tyrannies seek to buy allies, public relations and propaganda is not foremost in the arsenal by which they defend their turf internationally.

Israel has established a standard of its own — it and its supporters have erected what is probably the most substantial propaganda apparatus in modern history (in all history, given technological facilitation?). The mythical Goebbels’ operation was small fry by comparison. The Zionist enterprise out-rivals the Soviet Union’s post-WWII Cominform, not least because the latter’s members were anathema to Western establishments whereas the former has been taken to their bosom.

The Zionist enterprise socialises the young to its cause. Numerous Australian Jewish “faith” schools have in their mission statements (in conjunction with a love of universal values) a “love of Israel”. Thus, Melbourne’s Bialik College:

A certain Ben Zygier finished his secondary schooling at Bialik, and the capable young man learned his lessons well. He subsequently lost his life for the “love of Israel”. Martyred to a higher cause. Israel determined that his life was redeemable for around a million dollars, no questions asked. Bialik has maintained its mission statement unaltered since the tragedy. It is not unrepresentative, as Michael Brull, product of the system, highlights at Overland (29 May 2013).

And not by accident. In 2013, when the non-U Australian Jewish Democratic Society advocated a boycott of Israeli settlement products, it was aggressively trounced by the keepers of the flame. Thus the President of the Jewish Community Council of Victoria proposed that the AJDS be dis-affiliated. She claimed:

“… this campaign is repugnant to the long-standing policies of the JCCV and indeed to those of the majority of our community.”

The President of the Zionist Federation of Australia later joined the ZCA spokesperson in fulminating:

“The idea that a Jewish organisation that purports to be a part of our community supports (even a part of) the insidious campaign of delegitimisation being waged by Israel’s enemies is not only repugnant and immoral but also unfathomable.”

The president and executive director of the Executive Council of Australian Jewry agreed. From the ECAJ’s website:

“[They] sharply criticized the call by the Australian Jewish Democratic Society for a boycott of products from the West Bank, describing it as “a misguided and empty gesture that will be completely rejected by the vast majority of people in the Jewish community, and by fair-minded people everywhere.” …

“”… the AJDS has succumbed to the myth that settlements are the major impediment to Middle East peace. That notion has been thoroughly discredited, as has the idea that a boycott of any kind can make a constructive contribution to peace between Israel and the Palestinians.” …

““… the AJDS campaign is repugnant to the strong anti-BDS policies of every Jewish communal roof body in Australia, and to the ECAJ platform of support for Israel and its legitimacy as the State of the Jewish people.””

How many organisations does it take to not change a light bulb that sheds no light? One hopes that that position is perfectly clear. And its implications. Tribalism to the fore; intelligence, humanity and moral integrity to the rear.

To the know-nothing outsider, Israel appears transparently "on the nose". Why the ongoing Occupation, brutal subjection of a people on the basis of a differential ethnicity? A denial, a re-fashioning, of the seemingly obvious becomes an imperative.

This is Part 1 of a 4-Part essay on the attempt to denounce "free speech" about Israel's gross violations of human rights as "anti-semitism".