Is Australia run by compulsive liars? Part three: Will Bill lie like Tony to be PM?

To gain office, Bill Shorten has been urged to emulate Tony Abbott’s successful strategy of three word slogans, character attacks and barefaced lies — but will he do it? Alan Austin completes his stunning series.

FACTS AND FIGURES published by Independent Australia and elsewhere lead to one unpalatable but unavoidable conclusion: Australia is in the grip of powerful organisations which lie and cheat to achieve their objectives.

And they lie about what those objectives are.

The fledgling Abbott Government has already broken more than 25 commitments which were well within its power to keep.

That’s more than three a month.

There were only about three such avoidable broken pledges in the entire six years of the Rudd/Gillard governments.

This series on blatant lies – a category of moral failure far more damning – has documented an even greater disparity.

This brings list of blatant falsehoods by a major party leader for the past 20 years to:

Clearly, it is not just Coalition leaders who lie routinely to advance their cause.

If any Coalition MPs are dismayed at this, they are keeping silent.

Malcolm Turnbull appeared to express disquiet at the Woodford Folk Festival in December 2012:

It has never been easier to get away with telling lies.

It has never been easier to get away with the glib one liner.

Broadcasters or politicians or writers who think that they are respecting Struggle Street ‒ the battlers ‒ by dumbing things down into one-line soundbites are not respecting them, they are treating them with contempt.

Was “the battlers” a reference to Howard’s battlers?

Was “the glib one liner” referring to Abbott’s three word slogans?

It’s a curious thing, however, that Turnbull has, on his website, virtually every speech he has delivered, every interview he's done, every media release he's issued and every opinion piece he’s written since becoming Communications spokesman.

Hand in hand with the Coalition in disseminating lies about the political parties, their programs and personalities are Australia’s mainstream media, led by Murdoch’s News Corp.

Of Abbott’s 31 direct lies on the record, 16 falsified Labor's record or its policies. Four advanced Coalition policies. Thirteen were in the 12 months before last September’s election.

Subjects included asylum seekers, taxes, government debt, the economy, broadband and deals with the Greens. On such hot issues, these would have swung some swinging voters — of whom a mere 30,000 decided the final outcome.

This is in stark contrast to Europe, where liars are usually instantly disqualified, and the USA, where the Republicans have tried the strategy, but with far less success.

So is it now necessary for any successful leader in Australia to lie to their colleagues and the electorate?

Labor under Bill Shorten has certainly been urged – including in discussions on the comment section here on IA – to emulate Abbott’s winning strategy of hollow slogans, character attacks — and even barefaced lies.

Whether such a change of strategy is being contemplated by party officials is, of course, unknown. But, of the two lies by Labor leaders on the record in the last 20 years, one was late in the 2013 campaign and the other was just this year.

The former was Kevin Rudd’s costing of the Coalition’s paid parental leave scheme on ABC's Q&A program on September 2:

“It is more than we spend for the entire nation on childcare support for all those families out there with kids in childcare. It is a bigger number than that.”

According to very picky analysis by the ABC fact checkers, this is ‘incorrect’.

The latter, by Bill Shorten, was before the WA Senate election re-run, when he said:

According to the ABC’s fact checkers, this “doesn’t check out” either.

Whether Labor escalates this strategy remains to be seen — but if it’s a winner, why wouldn’t they?

The answer to that, of course, is that deliberate lies show utter contempt for the hearers. Those people, then ‒ when the lies are discovered ‒ hold the speaker in even greater contempt.

Or as novelist philosopher Terry Goodkind put it:

‘Once you place that crown of liar on your head, you can take it off again, but it leaves a stain for all time.’

So, can the cancer be removed?

Clearly, the Coalition has no motivation to change.

Abbott’s methodical lies and impossible promises won office emphatically against the only government in the western world to succeed in averting disastrous recession during the global financial crisis. And one with an impressive record in foreign affairs.

Beneficiaries of the Coalition victory are content. The big miners, the jet fighter merchants, the gambling industry, the tobacco pushers, the rich lawyers, the foreign cartels and those who stand to turn a quick profit buying Australia’s public assets at bargain prices have no complaints.

Rupert Murdoch and the liars he employs will continue to distort and fabricate to support the Coalition.

So it falls to those aware of the manipulations.

Fortunately, there are recourses available.

It is possible to identify the companies who support the mendacious commercial media, to boycott their products and services and write to them explaining why we are doing so.

It is possible to promote this publication and other alternative news outlets which value accuracy and truth.

And it is possible to participate in direct action through reformist political parties, unions, churches, marches and rallies.

‘Evil is not one large entity, but a collection of countless, small depravities brought up from the muck by petty men.’

These evils done by petty men can be overcome. 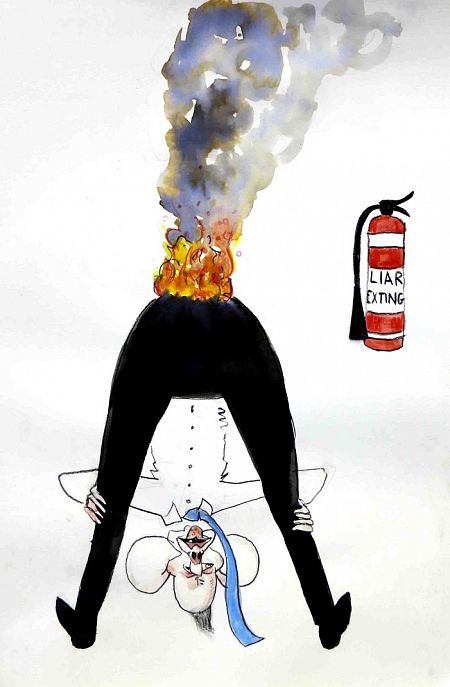