Into New Jacksonville with Team Bolano

If Marco Bolano can promote himself as "new" in the HSU election campaign, then words really mean nothing anymore, says Peter Wicks.

There has been a lot of debate over the last couple of weeks as the Macquarie Dictionary were found to be napping, not updating the word misogyny. They have apparently now caught up with the Oxford Dictionary and most others and are in the process of updating it, thanks to a massively popular speech in parliament from Julia Gillard, admired by virtually all, except right wingers and members of the press gallery.

There are some words however that will never change their meaning — not even a remote chance.

Try and imagine this scenario:

You have just been to a car dealer and handed over your hard earned cash to buy what you think will be a shiny new sports car. You wait for what seems like the longest couple of days in history and head back to the dealer to take delivery of your new car.

However, upon your arrival, a nasty surprise awaits. It seems that the new sports car you thought you were picking up is, in fact, a second-hand, clapped out rust bucket, in the vague shape of what was once a sports car.

It turns out the salesman had a different idea of what the word "new" means.

I know what you're thinking ― nobody would have a different meaning for the word "new".

Marco Bolano clearly struggles to grasp the concept of both the written word, and the English language, one only has to hear him speak and that becomes abundantly clear. 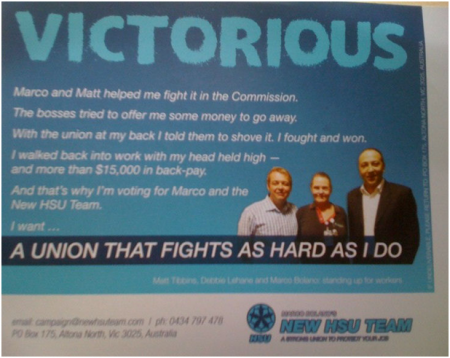 A quick look at the flyer above for Bolano’s campaign and its use of the word "New" may have you scratching your head in disbelief. It did with me...

Here is the Oxford dictionary's meaning of the word "new": 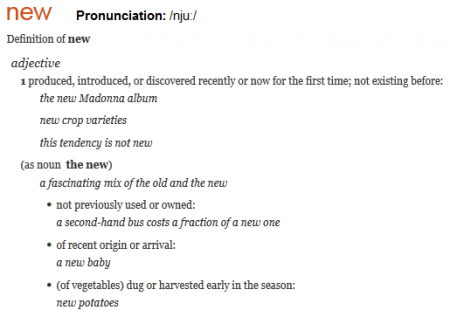 There are a few explanations for the using the line "New HSU Team" for the campaign, none of them good. We can all be sure that these guys are certainly no "A-Team" – they are not even "The Mighty Ducks" – but one thing they certainly aren't, with Marco at the helm, is "new".

One explanation is that whoever came up with the slogan was dropped on their head as a baby ― maybe even repeatedly.

For those with a religious disposition, perhaps the parents of the slogan's creator lost a bet with God, and the IQ of their child was the consequence. In any case, whoever thought this slogan was a bright idea wouldn't know a bad idea if it jumped up, slapped them in the face, and then bit them on the butt.

Then again, maybe they aren't really stupid ― maybe they just think their members are?

The team may be hoping that some poor ill-informed member who is sick of having their wages and conditions sold out to the Coalition Government running the State by the Union who are meant to be looking after them, will think they are actually voting for someone fresh and new.

Maybe they hope using the word "new" means that members who don't want to see the same faction that has rendered Number 3 Branch insolvent, and financially crippled Number 1 Branch, may vote for Team Bolano by mistake.

Whatever the reason, it is a disgrace, and I believe it may actually breach the law. I was under the distinct impression that printing deliberately misleading electoral material was against the law. I hope somebody takes a closer look at this. I am crossing my fingers that the Australian Electoral Commission aren’t napping at the wheel.

For those of you voting, take a look at the below video and you will get a good idea of what to expect under the "new HSU team", if you are unfortunate enough for them to be elected ― or if ballot boxes disappear again. It also explains what Bolano means by: "Fights as hard as I do".

Yes, that is the same Marco Bolano as the "new" Marco Bolano. Unless, of course, we were all blissfully unaware that he had a twin brother with the same name...

When you go to vote on election day, don't be fooled by the misleading use of the word "new", by Team Bolano.

These are the things you should be asking yourself when you go to vote:

Do you want a union run by thugs and bullies, like the ones in the video?

Do you want your union run by the same faction that has virtually bankrupted the Victorian branches?

Do you want your union run by the faction that is currently under police investigation for allegations of rorting that could amount to millions of your dollars?

Do you want your union to be run by the same people who were the very first to sell out your conditions to the Baillieu Govt, getting the worst result of all the unions for you and your fellow members?

Do you want your union to be run by the faction whose leader speaks at Liberal Party functions backing calls to weaken the unions?

Do you want to vote for somebody who treats you like your stupid before they are even elected by trying to tell you they are new?

Do you want a union run by Jackson/Bolano/Hart/Behrens?

I sure as hell wouldn't.