ICAC, Abbott and Dobell: Democracy at its worst

The NSW Coalition Government is showing itself to be one of the most corrupt in the nation's history, with questions now arising about the conduct of Prime Minister Abbott, writes Peter Wicks.

During the Gillard Government, and the second Rudd government, there was one particular electorate that was, arguably, talked about more than any other in the country.

That electorate was Dobell on the NSW Central Coast.

Tony Abbott and others from his front and back bench were always talking about the good people of Dobell and how they deserved to have a member looking after their interests that they could be proud of.

The former member for Dobell was, of course, Craig Thomson — who is now awaiting another chapter in his media trial as he appeals being found guilty of charges he was not charged with.

As Tony Abbott sang the praises of Thomson’s accuser Kathy Jackson, he piled on the sympathy for those living in the Dobell electorate.

Kathy Jackson, as we all know, is herself alleged to have rorted hundreds of thousands of dollars from union members and is also alleged to have been in charge of the union while it set up and administered a slush fund.

Despite Thomson delivering many achievements for his electorate, Abbott was keen to point out that Thomson must have been spending too much time on legal matters rather than his electorate's interests.

Tony Abbott was so concerned for the good people of Dobell and adamant they have a voice, he effectively tried to mute them. There was the talk of Thomson being a “tainted vote” and then the childish and comical episode where Tony Abbott and Christopher Pyne bolted for the door in Parliament, like a couple of tourists dashing for the loo after a dodgy curry, just so they wouldn’t have to vote the same as Thomson.

Tony Abbott promised the people of Dobell he would deliver integrity to the electorate and put up a candidate that was honourable and trustworthy.

Last September, it seems Tony Abbott broke another promise to the people of Dobell, as his Party delivered them Karen McNamara

Since being elected, the new Liberal member for Dobell can hold her head high and tell of the many things her government has delivered for this generally working class area, such as:

So honourable and trustworthy is Abbott’s colleague Karen McNamara that she is the second Liberal Party Federal MP hauled in before ICAC to explain themselves (the first being former Assistant Treasurer Arthur Sinodinos).

McNamara stands accused of electoral fraud for her actions during the 2011 NSW State election. 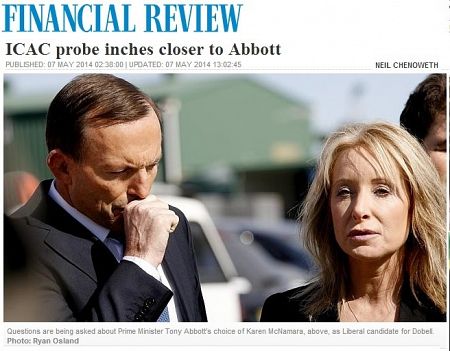 McNamara allegedly boasted that she had raised approximately $300,000 for campaigns in the region. This included one campaign, where it is alleged she claimed to have raised $80,000 for that seat, despite only declaring $11,082.04 in donations.

An excuse that has been offered up is that often candidates often inflate their fund-raising results to make themselves look better.

This effectively tells the people of Dobell that they have a Federal Member that is corrupt, a liar or – as I suspect – both.

ICAC heard evidence that one donation was banked by an unregistered company called Eightbyfive.

ICAC has also hear allegations that Eightbyfive was set up by Tim Koelma.

Koelma was a staffer for Chris Hartcher, the now disgraced former NSW Minister who was forced out after ICAC revelations and a police raid on his office.

Eightbyfive was used as a means of funnelling illegal political donations to the Liberal party — or, in other words, launder money.

With all of these allegations surrounding McNamara, one would think that if Abbott was interested in consistency and not seeking to appear hypocritical, he would be declaring McNamara’s votes tainted and suspending or expelling her from the Party.

This was, after all, what he demanded Gillard do with Thomson.

However, just like his views on governments promising no new taxes before an election and then delivering one after being elected, Tony’s views on tainted votes and what makes an honourable member seem to have undergone a transformation since taking office.

Whilst this is going on, the jobs for the boys and dodgy undeclared donations saga also continues with new NSW Premier Mike Baird refusing to answer question on serious allegations raised about his role in undeclared political donations in his campaign and one of his donors being given some lucrative positions on a silver plate.

Latest revelations in ICAC heard involve Eightbyfive, huge donations and a luxury yacht ride in the Whitsundays — and have dragged even more NSW Liberal MP’s into the scandal.

The righteous and the wicked — all on one boat.

The allegations involving Michael Gallacher are so immense that ICAC had to be suspended last week to allow more time to fully investigate.

What is truly alarming is that the two highest authorities on law and order in NSW have both been implicated in the corruption scandal that dominates politics in NSW currently.

Those figures are, of course, the former Police Minister Michael Gallacher and now the former Attorney General Greg Smith, who also gained notoriety for abusing constituents at a public forum on the broken promises concerning the North West Rail Link, which has turned into an $8 billion substandard shuttle service.

With all of this going on, the silence from Tony Abbott on the plague that devastating his Party has been deafening.

This may be related to the sudden declaration by the Liberal Party of donations from four years ago that are associated with Tony Abbott and Joe Hockey.

Also interesting, back in 2007, the Warringah Club was singled out by the NSW Election Funding Authority for not complying with state disclosure requirements. Only after being exposed did it then lodge a return that stated donations of $63,000 to the Liberal Party, however details on where the money came from were lacking, so it is unclear if any donations were in breach of the donation cap or who, in fact, made the donations.

In NSW, Parliament House has started to bear a resemblance to the Big Brother house, with a Liberal member being seemingly evicted for corruption every week.

ICAC have shown the current NSW Coalition Government may be the most corrupt government in this nation's history, with only the Obeid scandal and the Joh Bjelke-Peterson years coming close in comparison.

Something is deeply broken within the Liberal Party of Australia.

Tony Abbott needs to decide whether he is complicit, or whether he will address it.

We are currently witnessing democracy at its worst. 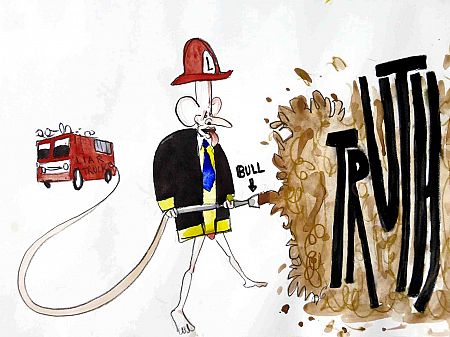