While threats made by right-wing figureheads such as Lauren Southern are shallow, the Government should still be wary, writes Tom Tanuki.

THE FIRST REAL legal threat I ever received was from Canadian white nationalist figurehead Lauren Southern.

(Actually, that was just the first defamation letter. I got a cease-and-desist In 2018 after I lifted the classic 1970s Life, Be In It design for a Yelling At Racist Dogs shirt I was just about to sell. Victorian Liberal Leader Matthew Guy was promising to resurrect Life, Be In It at the last Victorian State Election; I reckon they thought an anti-fascist group reappropriating the design would muddy the Liberal campaign waters.)

Back to Southern’s threat. It stemmed from an article I wrote in October 2020. At the time, she had been living in Australia with her husband and child for a few months. I’d published a theory – which we now know to be correct – on the context surrounding her move to Australia.

I was able to piece this theory together because the editor of True Crime News Weekly had received some (limited) leaked visa approval information from someone. Looking over the information, I realised it offered a connection to Southern’s then-recent video, “quitting” white nationalist content creation. 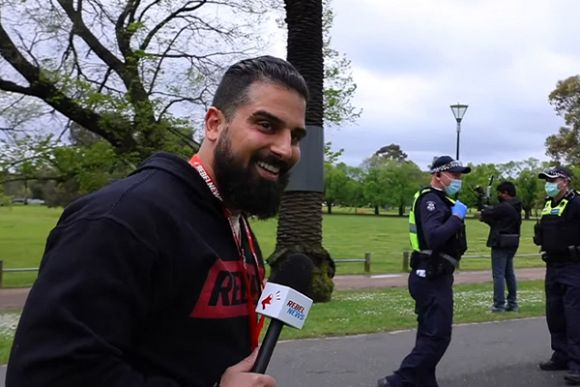 The anti-lockdown movement has given a platform to “citizen journalists” seeking fame and determined to incite hate and disturb the peace.

The link was that she published the video only one weekend before making her visa application. My conclusion was she had only quit – and vaguely pretended to disavow white nationalism – so she could get a visa to live here.

Lauren didn’t receive my article well. First, she tagged Opposition Leader Peter Dutton into a seething post demanding I and the site I wrote for be investigated.

She deleted that and later posted this thread about her concerns with my ‘radical left-wing blog’: 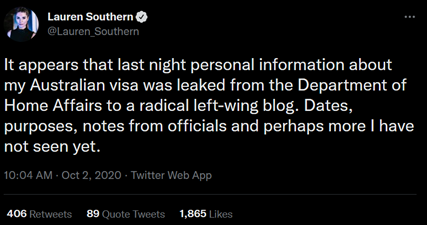 It must be worrisome when someone gets to see your visa documentation. I acknowledge her right to those concerns. (I also braced myself for a reactive raid from Dutton’s stormtroopers. It never came.)

But I will say this — Lauren once took part in a militant European far-right campaign to block the rescue of migrant vessels in European waters. She was a leading figure amid the rise of a more polished strain of white nationalism; she was among those chiefly responsible for delivering the Great Replacement conspiracy theory to a worldwide audience, a theory later cited in the Christchurch killer’s manifesto.

Lauren is not just my political opponent, she is also a really dangerous person. We’d already banned far-right figureheads from conducting paid speaking tours in Australia, such as Gavin McInnes and Milo Yiannopoulos (the second time, anyway). Why we would accept their equally notorious peer to reside here for good was beyond me.

Within days, I received the legal letter.

It outlines a series of what it charges are defamatory comments.

There are many mystifying points here. Ms Southern’s work with neo-Nazi Martin Sellner is a matter of fact — she deleted the videos, but they’re around. It’s a commonly accepted fact that Ms Southern attended a mission to block ships looking for stranded migrants. And Ms Southern published two very popular videos about the Great Replacement, also the title of the Christchurch killer’s manifesto.

But let’s look specifically at point d.: my “defamatory comment” that Lauren ‘entered Australia under false pretences and applied for another form of residency in order to reside in Australia’.

‘How long will it be until Lauren Southern begins to endorse the next version of the Great Replacement on our screens?’

Once she made her Australian residency public, she was immediately courted by Australian far-right outlets. Present on bit-part guest spots on Sky News and in written media, local outlets were ecstatic to host her. She wasn’t retiring from anything. She was refashioning herself in a more visa-friendly guise for presentation on Australian screens.

But as I said at the start, I now know my “defamatory” theory about Lauren’s arrival in Australia to be a matter of fact. That’s because she has recently confirmed it herself. 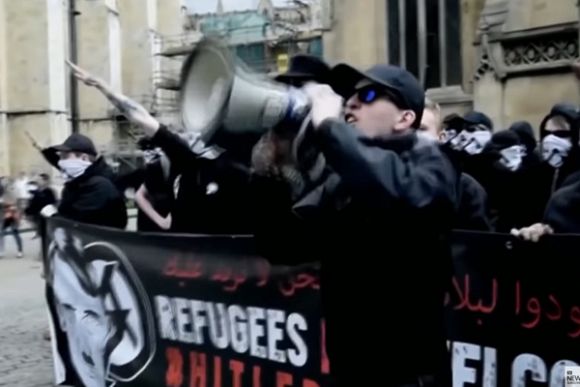 Lauren published a lengthy video called The Whole Truth on Tuesday. It commits more than two painful hours to unending navel-gazing about all the white nationalist shit she’s ever said or done. She says in the video that she was declared a political extremist in many countries and that this stifled her ability to apply for international visas.

So, she essentially had to make a performance of “quitting” in order to get a visa here — and this strategy was almost immediately successful.

So, I think that means I was right all along.

Is that it? Am I merely writing about this to gloat, loudly declare “I told you so!” and smugly offer the old truth defence to that old 2020 defamation letter?

Yes. Correct. I am always right. I am so right that racist parasites want to sue me about it. That’s what I came to say. But there are other reasons, too.

I’m writing about this to commit it to the record, for one. Litigious, dishonest figures like Southern slime their way about the political fringe carving out a financial spot from the attention that comes with dangerous political scenes like white nationalism. Only committed truth-telling by others will keep the score on their compulsive lying.

Secondly, it should be made abundantly clear that the Australian Government let in one of the world’s most notorious white nationalists because she spun a bit of bullshit to make herself sound reformed. We gave the world the Christchurch killer and then we let one of the Great Replacement theory’s most famed proponents come and live for a bit. 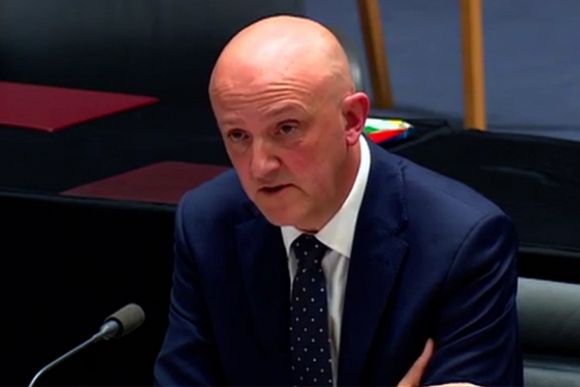 Instead of looking to our nation's security agencies for answers in eradicating far-right terrorism, we should start by acting more locally.

Our system is either incredibly gullible on the lies the far-right tell, or wilfully complicit in harbouring white supremacy. Take your pick.

But just so you know: no matter how much they bang on about ASIO’s workload percentages, you cannot expect Australia to grasp the threat white nationalism poses.

Finally, I’m writing to embolden people who find themselves on the receiving end of the threats that far-right figureheads make. I worried when I got that legal letter in 2020 because I know how litigious Southern is. But everything I said was true, it seems, so like most of these frivolous threats, it led to nothing.

Lately, we’ve seen Rebel News Australia conduct grand court-enabled doxxing campaigns against people who say things they dislike. I imagine that someone on the receiving end of that level of intimidation must also have felt a distinct pressure to shut up.

These people will threaten the courts to take you down, or at least scare you into submission. But they’re all such germs, I think, that it’s ethically worthwhile to have a crack at them anyway.

Where’s Lauren now? I think she’s back in Canada. She’s dropped the visa-friendly discourse, essentially taking the mask off again. Wherever she is, I’m sure she’s out there paying for another legal threat to some poor mug as you read this. Whoever they are, whatever they’ve said, I hope they don’t fold.

Name ONE politically significant thing she's ever done...shooting flares at migrants? Wearing a tarted up "It's Ok to be White" shirt??

You're a YouTube thot and always have been. You greatly overestimate yourself!

16 July 2022, 8:00am While threats made by right-wing figureheads such as Lauren Southern are shallow ...

2 July 2022, 8:00am Three factions are conspiring to distort the truth over the matter of Blockade ...
Join the conversation
comments powered by Disqus
News updates