The Royal Commission report into the so-called ‘botched pink batts rollout’ is due 31 August. According to Alan Austin, who presented a sworn statement of evidence and followed the public hearings closely, the inquiry has failed to examine several vital areas.

This is part five of Alan's submission (edited only slightly for format).

Spectacular improvement in safety during the HIP

Fortuitously, despite the lack of regulation prior to the onset of the GFC, the rate of recorded adverse incidents fell dramatically during the Home Insulation Program (HIP).

According to the CSIRO, the number of house fires per 100,000 installations declined substantially. There was almost certainly a commensurate fall in the rate of injuries and deaths. This is not provable, however, because of the lack of data prior to the GFC.

For the first eight months of the insulation program, there were fires and some injuries, but no fatalities. This suggests that the safety measures urgently developed in consultation with Minter Ellison and others and implemented by DEEWR (the then federal workplace relations department) were substantially sound.

By the end of the program in February 2010, only one fatality – that of Marcus Wilson who died of heat exhaustion – had occurred where regulations were complied with.
Improvement in fire safety during the HIP is shown in the detailed fire data here: CSIRO Risk Profile Analysis – Guidance for the Home Insulation Safety Program. [22]

Valuable further analysis of the CSIRO data by researcher Scott Steel has been published by Crikey on its psephological blog Pollytics, as follows:

The Home Insulation Program reduced the short term fire rate by approximately 70% compared to what was happening before it.

The Home Insulation Program was over 3 times safer than the industry it replaced in terms of the numbers of fire experienced within 12 months of getting insulation installed.

The findings were similar:

Ultimately, the HIP – as we’ve stated from the beginning, regularly, using publically available data at the time – was much safer in terms of fire rates than what preceded it. Now, however, we know that it was safer over both the short term as well as the longer term. [25]

Unfortunately, there is no data available to compare the rates of injuries and deaths in the insulation industry before the HIP with that during.

The number of deaths prior to 2009 is unknown as data is not provided separately for types of construction work. Fatalities among all tradespeople and labourers are shown in Chart C: 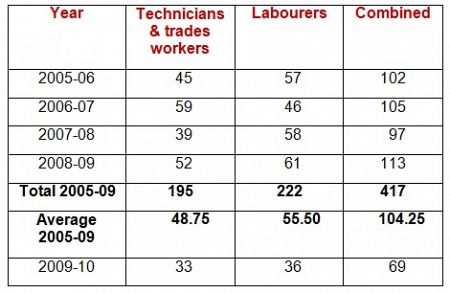 It is not known how many of these 417 fatalities in the four years prior to the HIP were working on home insulation.

“... a New Zealand program which had to be suspended because of three people electrocuting themselves.” [27]

The New Zealand Government’s Department of Labour website, however, states:

‘In the past five years there have been approximately four deaths resulting from installing underfloor insulation in New Zealand.’ [28]

Frustratingly, that document has no date.

‘There have been five electrocutions involving under-floor insulation foil in recent years. At the end of 2006, a New Zealand Standard was published that covered the installation of insulation, including under-floor foil.’ [29]

Again, no date. So has it been three, four or five deaths? Or more?

The data in Australia in even less reliable. There seems no verifiable data source anywhere.

The best case is, of course, none. That seems improbable. If the next best case is assumed – just the one fatality in the preceding four years – then that is one in 268,000 (67,000 installations annually x four years, using Professor Tiffen’s volume estimate [8]).

That is a rate of 3.73 per million homes insulated, marginally higher than the rate during the HIP. The real figure may well be much higher, given the evidence from New Zealand and elsewhere.

Research for this statement has sought diligently to verify the number, including with discussions with Dennis D’Arcy of ICANZ and others, with frustrating lack of success.

It was not just in insulation, however, that safety improved dramatically in 2009-10, but right across the industrial landscape.

Chart C, above, shows the decline in fatalities among tradespersons and labourers. From an annual four-year average of 104 deaths prior to the HIP, this dropped to just 69 in 2009-10.

Specifically regarding electrocutions, tables from the National Coronial Information Service show the total number of deaths over the three years of the Labor government from 2008 to 2010 averaged 13 per year. This includes three insulation workers killed during the HIP. [30]

So it appears that all the risk assessment and mitigation during the HIP worked effectively in reducing electrical safety risks as well as workplace danger across all construction work.

It is unlikely there has been another industry in Australia – or elsewhere in the world – where there was such a huge rise in construction activity with an accompanying drop in the rate of adverse incidents as dramatic as that during the HIP.