With Julia Gillard announcing an election on September 14, Andrew Elder says the campaign will be a race between those who want to discover what an Abbott government will be like and those who want to hide it. 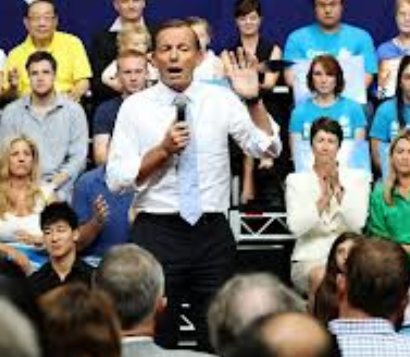 WHEN THE JOURNOSPHERE announced that Tony Abbott was going to engage in a pre-election campaign – going around the country with stunts for the media, but offering no specific knowledge about how we would be governed by the Coalition – I thought: how would this be different to what he's been doing for the past three years?

In the recent bushfires affecting the south-east of the country, Abbott purloined a truck and a uniform from the Davidson Rural Fire Service brigade (which was not on active service, nor on stand-by), drove it several hundred kilometres and held a press conference for a Liberal MP who isn't seeking re-election.

It was stupid for Abbott to put himself in a position where he was using public emergency resources for a self-serving stunt. He has put the NSW Government in an invidious position too — one that might come back to bite them at a time not of their choosing.

Even if you write all of that off because hey, that's politics, Abbott just looks like a poser. This undercuts the whole action-man Abbott persona people like Credlin have been carefully building for over three years.

Having Abbott fly to Brisbane, spend two minutes filling a sandbag in a suit and then flying out again — you have to wonder how serious the Coalition really are (as long as you're not a press gallery journalist, who do not dare ask even mild questions like that).

These are proper questions for the alternative government to ask (so long as it doesn't get in the way of actual emergency relief efforts as required right now):

Do you think Abbott and the Coalition – anyone at all, even some anonymous backbencher or staffer – is thinking about those issues?

Drag0nista has made the Abbott-Latham link almost ten years after Michael Duffy's Hot for Boofheads. What she quotes Michelle Grattan as being "the likeliness that he will be in the PM’s office by the end of the year" is nothing more than the conventional wisdom of the press gallery — a meme in which they are trapped and out of which they cannot credibly break no matter what happens. They both rely heavily on the 'they would say that, wouldn't they' of senior Liberal frontbenchers talking up the Liberal leader and talking down his weaknesses.

The point about both Latham and Abbott is that it was necessary for each to hide their real selves from the public, in order for the public to hold them in the same regard they hold themselves (and at which Duffy held them). Latham failed in that endeavour and Abbott is starting to do so now — despite Grattan and others in the journosphere having been more than happy to help out with his smoke-and-mirrors routines.

Karen Middleton is a former president (2005-2008) of the Canberra Press Gallery and reports for SBS. Her reports never waver from presenting press gallery groupthink as though it's what is important about how we are governed. People who craft political messages, like Mark Textor, love that predictability and Middleton loves an easy-to-get story. That explains the kissy-kissy insider intimacy here and the disdain for the barbaric "some". (We are millions, Karen, millions. You can't see us from Canberra, even if you stand on tip-toes on Capital Hill, and nor can you see us in the crap Textor shows you in the name of "inside information".)

To give another example (if you're a Crikey subscriber), Bernard Keane thinks that Abbott's inconsistency is just part of his charm, and that you gotta let Tony be Tony if you're going to make it in the press gallery — never mind information-gathering for the reader/voter.

On Australia Day we had this from Abbott, which generated a lot of outrage from people who'd never vote Liberal anyway. If you chopped the last two paragraphs those remarks would have been perfectly apposite, the sort of thing people who like Abbott mean when they speak well of him.

In any case, here's the first of those final two paragraphs, delivered by Abbott at the Holdfast Bay Australia Day Awards and Citizenship Ceremony in Adelaide:


It is a proud people that you are joining. We had inauspicious beginnings. The first lot of Australians were chosen by the finest judges in England, not always for good reasons, and from that rather inauspicious beginning we have become a rich, a free and a fair society which has contributed so much to the wider world in good times and in not so good times. The reason why leaders use historical references in speeches is to reinforce their position; to demonstrate an understanding of the past helps reinforce how we came to the present with the leadership that we have — and to command the present is to command the future. To demonstrate a ropey and facile understanding of the past, and one that irritates the audience, can only make people wonder about Abbott's present position and can't help him seek advancement later in the year.

Here's how he ended the speech:

A lot of people got upset at that little injection of religiosity into a secular occasion — I didn't. It was well meant and sincere, and should be accepted as such. His real mistake was to depart sunny Glenelg to throw himself into a pre-election campaign.

The pre-election campaign is a Liberal Party ploy foisted on weak leaders. Nick Greiner submitted to it in the late 1980s, leaving nothing to chance at a time when it was a new and exciting idea from the US. Of all people, Andrew Peacock succumbed to it in the lead-up to the 1990 election — and a fat lot of good it did him. Jeff Kennett and Barry O'Farrell disdained the very suggestion, and so have other confident and electorally-successful Liberals since. You show me a Liberal leader who gets sucked in to a pre-election campaign, and I'll show you someone who's electorally doomed and who gets pushed around by backroom operators. The last Liberal leaders to fall for it were, if I recall correctly, Peter Debnam and Robert Doyle. If Isobel Redmond survives she will almost certainly be subject to this indignity too.

Abbott's pre-election campaign launch in a Lidcombe shed did nothing for party morale.

Active Liberals, keen Abbott fans, knew that they were engaging in an empty exercise — and it shows on – and undermines – the all-important TV optics. The fact that news programs shunted their coverage of it after the flooding in Queensland and northern NSW reinforces the image of Abbott as poseur. That event did nothing for the part of Australia which doesn't regard western Sydney as any sort of heartland — that is, most of it. For those who do, it yielded nothing beyond those images. The only real trace of it is this shower of nothing in particular.

The picture on the front page is significant.

If it was true that people respond well to Abbott as alpha male, they would have stayed with this, which basically says the same things but which appears to have been superseded. On the Real Solutions document, the team are arrayed to prop up a weak leader — similar to the way Labor propped up Bill Hayden in 1980 with the more popular Neville Wran and Bob Hawke.

In that picture, the Coalition front bench resembles a public service recruitment panel. It is as though they are to recruit us to their cause, rather than us selecting them as our government. What are they looking at? They remind me of David Moore's picture of migrants regarding Australia for the first time, hopeful but wary; a mix of emotions on their faces as to what lies in store for them. Have Hockey and Turnbull just come from a funeral, or are they at one?

It is heartening to see that Tony Abbott – and, by extension, the Coalition – believe in Australia and its future. After all that consultation, it's a start — but hardly a solution as such. The document really doesn't contain any solutions at all. It reads like the findings of focus group research, transcribed from butchers-paper scribblings with some basic graphic design slapped on top.

Note in particular the recurring logos featuring a white Australia, girt by sea and disconnected from everywhere else — a visual dogwhistle. I will go into that document in greater detail later in the week, bringing it together with his impending Pikers' Club speech and the various bits of jetsam that have emerged from Team Abbott is recent weeks. The fact that Abbott has been asked more questions about Tim Mathieson's prostate exam comments than about Ashby-Slipper shows what you can expect from the National Pikers' Club.

For the moment, though, Team Abbott are learning the lesson that Team Latham only learned after it was too late.

In part, this election campaign will be a race between those who want to discover what an Abbott government will be like and those who want to hide it. This will be a most interesting part of the campaign and the mainstream media will not cover this at all well — and nor will they do "the big issues" either; you know how they roll, devil-is-in-the-detail, are-you-frustrated-you-can't-get-your-message-out and all that.

(This piece was originally published on Andrew Elder's blog Politically Homeless and has been republished with permission.)

2 March 2017, 7:30am There is little prospect of Macolm Turnbull being replaced as prime minister any ...

24 November 2016, 6:30am Turnbull underestimates how much Trump will change the Australia-U.S. landscape ...

Lawyers and the Liberal Party: What’s keeping Brandis in office?

10 October 2016, 10:30am The answer to why Brandis hasn't resigned may lie in the absence of a suitable ...
Join the conversation
comments powered by Disqus
News updates