The LNP’s plan to privatise assets will have a major debilitating impact upon Queensland families’ household budgets. Steve Bishop does the sums.

Elementary mathematics, using official figures, reveals that every Queensland family will face extra taxes and charges averaging more than $1,000 each and every year if the LNP wins this month's Queensland election.

This is because an LNP government will lose income of more than $1 billion a year from the hugely-profitable, publicly-owned assets it plans to privatise.

Here's how you can check the maths for yourself.

The LNP has said that, if it wins government, it will privatise the hugely profitable power companies of Ergon Energy, Energex and Powerlink, and the ports of Gladstone and Townsville.

These government enterprises pay the Queensland Government dividends on their profits and the equivalent of income tax.

In its annual report for 2014, Ergon Energy reported dividends payable to the Government of $392 million (page 4) and tax equivalent of $181 million (p32).

The Government acknowledged the loss of this income in its Strong Choices PR campaign, saying on page 36 of its plan:

It is important to acknowledge the potential loss of income, in the form of dividends the Government currently receives from its Government Owned Corporations (GOCs). In addition, the GOCs pay income tax to Queensland.

If the Queensland Government leases these businesses it would not continue receiving this revenue.

This revenue goes straight into the Government coffers to help pay for education, health and all the other services (see table 3.1). 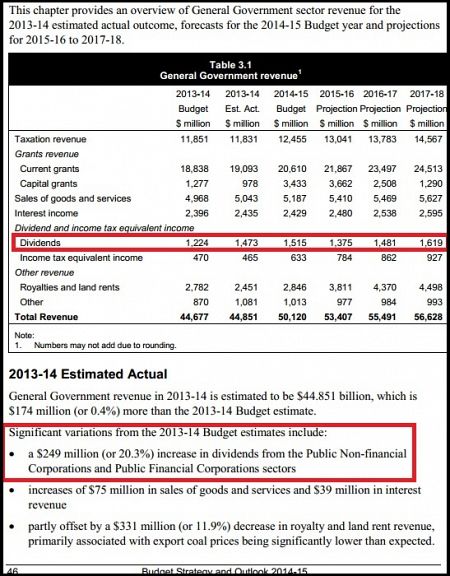 In order to balance the books and not cut services or sack hundreds of public servants, the Government will have to find another way of generating more than a billion dollars a year.

The LNP says it

'... will not introduce any new taxes and will provide more payroll tax relief for businesses.'

The Newman Government explained in its Strong Choices propaganda campaign:

As a State Government we only have the capacity to raise funds from a relatively small number of narrowly based taxes. These include:

Rather than increase the tax on payrolls, the Government has promised to reduce exemptions, resulting in a further hole in the income stream.

And it has strongly opposed increased taxes on mining.

Here we Joh again! Big miners put out the trash for the Qld election @independentaus https://t.co/MMxThaC1Ku

It could increase gambling taxes, but it said in Strong Choices:

In the 2012-13 Budget, the Government added an additional tier to gaming machine taxes and secured additional casino revenue. Increases in gaming taxes will affect the competitiveness and viability of operators including pubs, clubs and the leisure sector. Alternatively, it will be borne by players through lower prize returns.

The Government is chasing a casino-led recovery, so it is unlikely to make any changes there.

That leaves the taxes and charges it outlined in its Strong Choices questionnaire, which will hit families hard.

The Government told people that the taxes it could raise were limited to:

In addition, it could remove all Government public transport concessions, which would dramatically increase commuting fares.

It's not a sale, it's a 99 year lease. Campbell Newman set to put QLD on the market https://t.co/fnvpN0H4Ed Great piece on @independentaus

As I have reported previously, the LNP’s Mark McArdle gave this example on 4BC:

If we…try to quarantine the dividends from energy it means public transport subsidies are going to fall away and ratchet up massive price rises in relation to public transport.

For example, if we hadn’t lowered the cost of transport to travel from Redcliffe to Brisbane the increased cost would be $850 per annum.

I have twice asked Premier Newman about the extra taxes and charges which will be imposed on families, quoting the amount of income that will be lost from the power companies and asking him most recently, on January 14:

'How can a government that says it wants to cut the cost of living take this action?'

The reply I received from his office did not address the question, but did, ironically, include this line:

'Queenslanders overwhelmingly told the government that they did not want to pay more taxes.'

They may not want to but a one-seat majority for the LNP will cost each Queensland family dearly.

LNP whelming scenes http://t.co/IHnYa79wHk never eard of that word before? BTW Where was #asbestos_julie and also where was George B ?