If the Government keeps discussing non-existent "black holes" instead of addressing fiscal policy, it is just a question of when, not if, the bubble will burst. Dr Steven Hail reports.

AUSTRALIA faces major long-run economic challenges in the areas of climate change and energy policy, net migration and population growth, and provisioning for an ageing population.

These issues are complex enough, but are currently being made to appear even more difficult to manage than they ought to be because the short-run economic management of the country is being so badly mishandled.

Like many countries, Australia has deregulated, privatised and financialised itself into a more insecure, more unequal, less tolerant society and, at the same time, created a mountain of household debt alongside an inflated property market, which now acts as a drag on economic prosperity and threatens the stability of the financial system.

Successive governments have contributed towards these developments, while boasting about Australia’s now long period of avoiding what they have defined as a recession (an arbitrary definition, requiring real GDP to fall for two successive quarters) apparently unaware that this record was largely based on an increasingly precarious private debt mountain. The blame might lie mainly with the Howard Government, but not exclusively so. The Hawke, Keating, Rudd, Gillard and, of course, the Abbott and Turnbull administrations, have all played their part in getting us to where we are now.

And where are we?

Well, let’s take a look at Australia’s debt, using a graph based on data provided by the Bank for International Settlements (BIS). 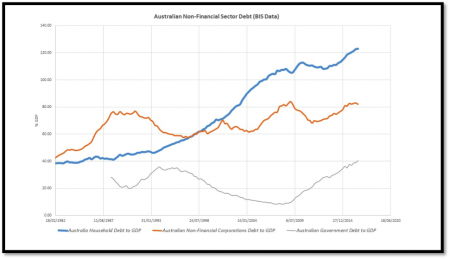 The above graph records the total debt of Australian households, Australian corporations which are not financial institutions and the Australian Government, relative to our national output in a year, going back to the 1980s.

What stands out from the graph? Corporate debt varies over time, but the ratio now isn’t so different to what it was 30 years ago. Government debt has been rising since 2009, as you would expect, but the ratio isn’t far above what it was in the early 1990s (and is very far below its level in previous decades, although that is not shown here).

Is this a global phenomenon, or a particularly Australian one? Let me put it this way. In the late 1990s, countries classified as advanced economies by the BIS had about the same level of household debt as Australia. They now have a ratio of 76%. Ours is 123%. They never went collectively above an 85% ratio of household debt to GDP, although of course, individual countries did, even just before the global financial crisis (GFC).

Why, fundamentally, have we been running our economy in this apparently crazy way? We have become addicted to a rising property market and to mortgage debt. Mortgage lending was rising by up to 20% a year in Australia before the GFC and although the typical growth rate has fallen to well below 10% in recent times, mortgage debt has continued to grow, as house prices have continued to rise. Just look at the blue line on the graph. It paused and threatened to turn down when the crisis hit but in recent times it has been rising again — albeit not on its pre-GFC trend.

In recent years, bankers and regulators have become increasingly concerned about the ticking time bomb of household debt and uncertain of how to extinguish the fuse before it explodes, or of how powerful that explosion might be if and when it happens. Both the Reserve Bank of Australia and the Australian Prudential Regulatory Authority (APRA) have repeatedly warned of the dangers. They have caused the RBA to avoid further cuts in interest rates for fear of a further stimulus to household borrowing, and APRA to tighten up on its regulation of mortgage lending and investment mortgages in particular. It is this tighter regulation that has driven small increases in mortgage interest rates by most lenders recently.

And yet others have seemed unaware there is a problem, or unwilling to admit one exists and determined to "explain" the rise in house prices as purely the result of a housing shortage. They have either seen rising house prices as a sign that Australians are "more wealthy" (this will prove an ephemeral form of wealth if and when the market turns down) or used the bubble to argue for further deregulation of planning regulations.

Politicians, in particular, have been too intimidated even to consider reforms to the tax system which might limit further house prices and possibly trigger falling prices, have been happy to use subsidies to prop prices up and in many cases have accused their opponents of wanting to make Australian households poorer by pushing prices down. We have even lately seen the Turnbull Government advocating for the use of superannuation as a vehicle for forcing prices up yet further because that would be the effect of allowing the use of super to pay deposits on homes. Anything to avoid a downturn on your watch, Malcolm. Kick it down the road!

From where we are now, a property downturn with such a high level of household debt would be a major problem. It has the potential to severely impact Australian banks’ capital ratios and to even cause insolvencies within the financial system and force a government bail-out.

Exactly what is the solution? In the long run, we need to reduce the financialisation of our economy. This means taking a long hard look at private super, at financial deregulation, privatisation and a whole range of other issues — such as the state pension and university tuition fees.

In the short run, we need to tighten up on mortgage lending a great deal more and accept that house prices need to fall. We need to wean our economy off its dependence on household debt and allow households to pay down their debts over time without that household saving driving the economy into recession. It is true that supply side factors need to be addressed in the housing market but – as RBA research has demonstrated – it is simply not true that the Australian property bubble can be entirely explained as due to a housing shortage. Those financial factors I have mentioned above are partly to blame for the bubble, with rising prices fuelling further debt, which drives prices up further.

Weaning our economy off household debt will require a willingness to produce significantly more of what in the graph is labelled "government debt". As I have explained elsewhere, Australian Commonwealth Government financial liabilities denominated in Australian dollars are not "debt" in the conventional sense at all. Our Government cannot run out of dollars, even though we very much can. Our Government, via its RBA, is a currency issuer; the rest of us are currency users. They don’t even technically need to issue "government debt" at all when they spend into the economy more Australian dollars than they tax out of it, although for more than 30 years now this is what they have chosen to do, virtually dollar for dollar.

Moreover, for us to net save and pay down our (private sector) debts, then absent an Australian current account surplus with the rest of the world, it is essential for the Australian Government to net spend. That is where the dollars we need to pay down our debts will have to come from.

Economies with current account deficits, as ours has had, can’t grow for long if their governments don’t run budget deficits, because otherwise the growth has to be driven by an increasing ratio of private debt to GDP. This is, even more, the case in an economy which has been financialised, so that the amount of money sucked up by stock market and property market speculation is increasing.

So the last part of my recommendations is firstly for the Australian Commonwealth Government to increase government investment in the economy and its deficit by 1-1.5% of GDP. There are many ways to do this, but dealing with those long-run challenges I mentioned at the beginning should be priorities. And secondly, for the rapid introduction of a voluntary, inclusive and extensive, locally managed but Federally funded job guarantee programme, to eliminate involuntary unemployment, underemployment and insecure employment, and to act as a shock absorber for the economy in the event of an economic downturn.

If politicians on both sides of Parliament keep calling for "a return to surplus" and discussing non-existent and essentially meaningless "budget black holes"; in ignorance of the appropriate role for fiscal policy in stabilising an unstable economy and of the damage caused to Australia by the Howard "surplus", then all I can recommend to you is that you prepare yourself for a bumpy ride when that bubble deflates.

It is just a question of when — not if.

You can read more by Dr Steven Hail at erablogdotcom, follow him on Twitter @StevenHailAus, as well as on Facebook at Green Modern Monetary Theory and Practice.

Australia may be on track to secure OECD's top ranking for highest household debt http://t.co/rXYhe7ZjYE