Gillard and Abbott were never really threatened by Aboriginal protestors

The official account portrays Prime Minister Julia Gillard and Opposition Leader Tony Abbott as being attacked by violent Aboriginal demonstrators today in Canberra. Present at the demonstrations was John Passant — who paints a rather different picture of events.

Lunching at the appropriately named Porkbarrel Café for an awards ceremony, Gillard and Abbott became the target of a large crowd of demonstrators from the nearby Tent Embassy 40th year commemoration.

Earlier that morning, 2,000 of us had gathered at the Australian National University for a welcome, some talks, rap and dancing before marching up to Parliament House and then on to the Tent Embassy at Old Parliament House.

At the front where I was we were chanting “What do we want? Land rights!” and “When do we want it? Now!”; followed by “What have we got? Fuck all!”, all the time raising our clenched fists to the heavens in a show of defiance and solidarity.

As the head of the march reached a fork in the road, we voted unanimously to go up to the New Parliament House. A bit further up, I turned around to see a sea of people, aboriginal and other flags fluttering and banners raised, all accompanied by a  cacophony of sound.

There was joy and laughter, and love and hugs all around, but anger too. The anger was directed at both Labor and Liberal governments who had done nothing but invade the Northern Territory; nothing to really address the life expectancy gap; nothing to end poverty and disease among Aboriginal people; nothing about sovereignty and paying the rent; nothing about land rights.

We reached the Tent Embassy, exhilarated. 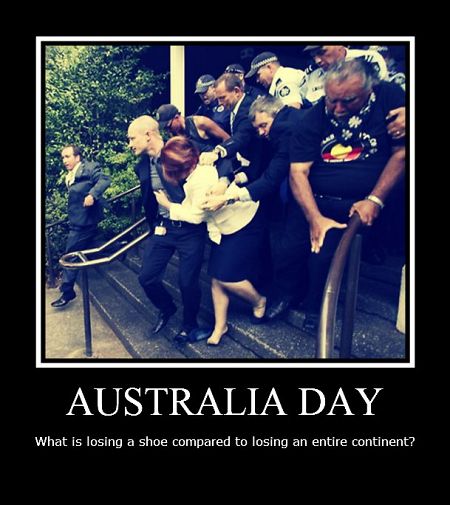 Witnesses reported that during one of the speeches a woman interrupted to say that Tony Abbott had said the Tent Embassy should be moved on. He was fifty metres away with his twin in racism, Julia Gillard.

Why doesn’t he come here and tell us that, they asked? Then someone suggested if he wouldn’t come to them, they should go to him. It spread like wildfire through the crowd.

Soon about 200 of the demonstrators moved from the Tent Embassy commemoration to the café to tell Abbott what they thought of him.

There was a bit of banging on the glass walls.

The chants started as “Shame, shame!” and “Racists, racists” and then became a steady “Always was, always will be, Aboriginal land.” This is a truth the one per cent and their paid mouthpieces, Gillard and Abbott, cannot acknowledge, let alone address.

The cops reacted as they always do when confronted by angry Aboriginal people.

Some of the demonstrators banged on Gillard’s car as it left and slowed down its exit.

It shows you how divorced from ordinary people Gillard and her Labor Party are that instead of coming out and talking to the protesters, she got her hired goons to attack them. I guess when you don’t have any case to make for having bettered Aboriginal lives then you need to use force rather than reason.

Then the cops tried to wreak their vengeance on the crowd – an Aboriginal crowd and their supporters – for having dared to protest against these two representatives of the mining companies that are stealing Aboriginal land. Together in a line, they walked slowly towards the protestors chanting ‘Move, move, move’ and in one case, shoved a pepper spray bottle into a demonstrators’ face.

A group of women sat on the road.

They had lost family in custody. They named three who had died there.

As they said, the same brutality the cops had used against the protestors was the sort of brutality used against their family members. They were sitting down and not moving to protest against racism and use of arbitrary force that led too to deaths in custody.

The demonstration was a reminder that polite conversation isn’t going to shift entrenched capitalist interests and their representatives in the Parliament. It might give you fake constitutional changes but not land rights, not sovereignty, not a treaty.

What happened today is the sort of protest that should greet Gillard and Abbott wherever they go.

(This is a slightly abridged version of a story published on En Passant earlier today and has been republished with the author’s permission.)