New studies show that the US financial sector lobbied long and hard for deregulation, and spent a great deal of time and money persuading politicians that it constituted the safe and modern approach to banking — but instead causing the global financial crisis. Simon Johnson  from Project Syndicate comments. 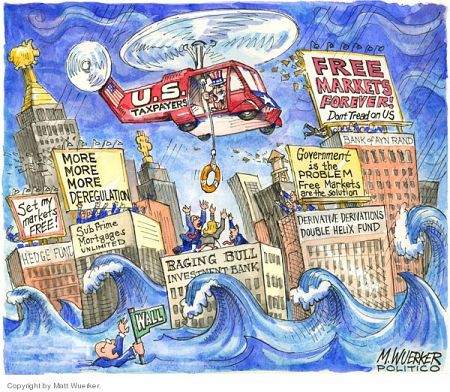 In the three years since the global financial crisis erupted, two dominant views of what went wrong have emerged. It is crucial that we understand each, because their implications for policymakers – and thus for the future health and stability of the global economy – could not be greater.

The first view is that governments simply lost control of the situation, either through incompetence or because politicians were pursuing their own agendas. This is the view heard most frequently from the political right – for example, from people who think that the main problem in the run-up to the financial meltdown of 2008 was government housing policies.

In the United States, among the candidates still competing for the Republican Party’s nomination to challenge Barack Obama in November’s presidential election, Ron Paul stands out for arguing consistently that government is the problem, not the answer, with regard to banking. If the government were removed more fully from the financial sector (including abolishing the Federal Reserve), he argues, the economy would function better.

The second view is that the financial sector lobbied long and hard for deregulation in recent decades, and spent a great deal of time and money persuading politicians that it constituted the safe and modern approach to banking. According to this view, government policies did not fail; on the contrary, they operated exactly as intended – and as bought and paid for.

If this view is correct, the kind of policy prescription recommended by Ron Paul is less appealing. Unless you think that a modern financial sector really can operate with absolutely no regulation of any kind (including, presumably, the rules for banks that come with deposit insurance), the real problem is not government officials’ policy preferences, but what financial-sector lobbyists are able to persuade officials to do.

Fresh evidence supporting the second view is now available in the form of a recent study by Deniz Igan and Prachi Mishra of the International Monetary Fund. In “Three’s Company: Wall Street, Capitol Hill, and K Street,” the authors look at the data – lots of it – on lobbying by financial-sector companies in the US.

Legislators, of course, have different preferences about what kinds of laws to support, which can make it hard to study mechanisms of political influence precisely. But Igan and Mishra approach the problem in a clever way – they look for instances when elected officials switched their position on legislative proposals that surfaced more than once. And they devote a lot of effort to figuring out what caused this switch.

In addition to analysing information about lobbying expenditures, the authors map out the network connections of lobbyists (known collectively as “K Street,” because so many have their Washington offices there) and legislators. For example, lobbyists were often previously employed by legislators on their staffs.

The results are simply staggering – although surely not a surprise to professional lobbyists. A big increase in lobbying expenditures helps to persuade legislators to switch their votes. And “whether any of the lobbyists working on a bill also worked for a legislator in the past sways the stance on that bill in favour of deregulation.”

It is deregulation, of course, that financial firms want – fewer rules and less oversight of any kind. And it really is all about whom you know, and how you know them. In particular, your value as a lobbyist seems to depend very highly on whom you worked with in the past. Igan and Mishra find “spending an extra dollar is almost twice as effective in switching a legislator’s position if the lobbyist is connected to the legislator compared to the case where the lobbyist is unconnected.”

The revolving door between Congress and lobbying firms appears to have been central to how the financial sector became deregulated, which effectively allowed excessive risk-taking in the run-up to the crisis. In another paper, Igan and Mishra, working with Thierry Tressel, found that firms taking more risks before 2008 were also engaged in more lobbying.

Essentially, financial firms have been buying the right to take on more risk. When things go well, executives in these firms get the upside – mostly in terms of immediate compensation, because few executives are compensated on the basis of risk-adjusted returns. That means that when the risks materialize and the firms suffer losses, the costs fall on taxpayers.

Ron Paul is right to point to imbalances of power and massive distortions within the financial sector. He is also correct that many government policies favour relatively few big firms – and favour them in a way that encourages excessive and dangerous risk-taking.

But Paul and others are wrong to argue that the government is the ultimate cause of all financial evil. Executives in financial firms want to take big risks. They like arrangements under which they win even when they lose.

Big financial firms can more readily buy the necessary political protection (in the form of deregulation), enabling them to become even bigger and more dangerous. This incentive structure has only become more extreme since the financial crisis of 2008.

(This story was published in Truthout and has been republished under a Creative Commons licence.)