GetUp! to date on the IPA's radical plans for Australia

By Graham Jackson | 11 April 2013, 5:37pm | comments |
Tony Abbott has said ‘Yes’ to many of the IPA’s 75 radical policies to transform Australia — but which ones? Progressive thinktank GetUp! is concerned, writes Graham Jackson.

Not-for-profit community campaigner GetUp! is another independent group highlighting the stark contrast between the Institute of Public Affairs recent indulgent dinner and the austerity plans it has for Australia. With Margaret Thatcher’s death and legacy currently in the news, GetUp’s recent email to its members (reproduced in part below) provides a timely reminder that arrogant Thatcherism is still alive and well. Call it whatever name you like, but the IPA ‘vision’ for Australia is a dog eat dog world. The alternative vision embraces the idea of community. What kind of country do we want? September 14 will provide the answer. 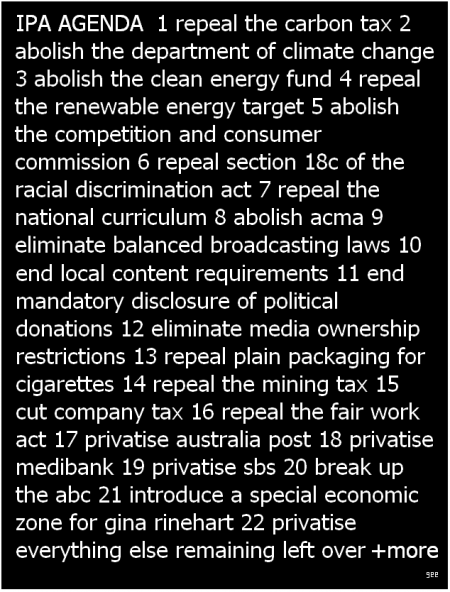 Here is the first part of GetUp!'s email to its members:

It was the most exclusive of events: a glittering $500 minimum per head gala fundraising dinner last week for a right-wing think tank. Tony Abbott, Gina Rinehart and Rupert Murdoch took turns sharing the stage. Andrew Bolt was MC. Tony praised his fellow key-note speakers, especially Rupert, and promised the crowd a "big yes" to many of the think tank's list of 75 policies to radically transform Australia.

So what, exactly, is on this think tank's wish list?

It goes on. Never before has the extreme conservative agenda been laid out so clearly, but as they get more arrogant and brazen, our movement has the opportunity to do something we can't count on any of the parties to do alone: fight back, effectively.

Click here to become a core supporter of GetUp's people-powered election campaign, and help stop this radical conservative vision of Australia in its tracks. 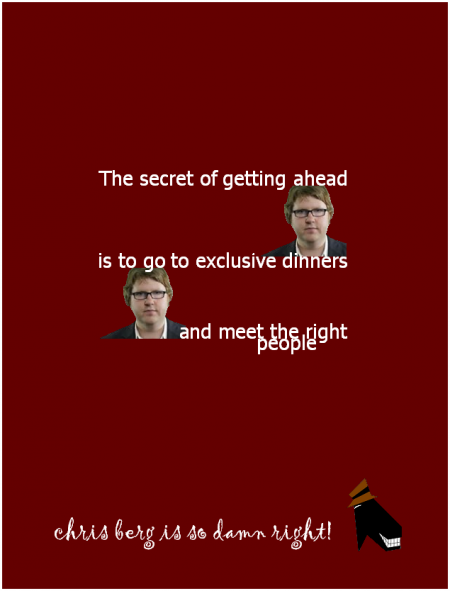