The most disconcerting aspect of George Christensen’s anti-halal campaign is that even he doesn't believe it funds terrorism, says Gamini Jayasinghe.

FOLLOWING AN hysterical anti-halal campaign by politician George Christensen, many Australians now fear that payments for halal certification are being used to fund terrorism. Despite a subsequent Senate report finding no connection between halal certification and terrorism, many Australian businesses have still had to abandon certification and deprive themselves of profitable sales channels. At the core of Christensen’s campaign is his sensationalist piece entitled ‘Terror in the Tucker Box?’, which, upon any reasonable examination, is fundamentally flawed and serves only to mislead the Australian public.

As I read the title ‘Terror in the Tucker Box?’, with its confused question mark, I felt instantly compelled to repeat it with the same upwards inflection as "I’m Ron Burgundy?". I must confess, I did that more than once. My suspicions that this piece would be supported by inference alone were not allayed by the uncertainty with which Christensen writes. Readers are expected to accept fanciful statements followed closely by the unconvincing language of “apparently,” “might,” “could,” “it’s entirely feasible,” and several further question marks. In fact, very little in the piece could even be considered to be an assertion — Christensen’s piece is but a collection of suggestions.

Christensen is quick to underscore the question that apparently causes him the most foreboding. 'Who knows where the money from halal certification is going', he asks.

Before we answer this, it must be said that few Australians had ever thought to ask this question. It’s fair to say that most of us waiting in line for that all-important kebab at three o’clock in the morning, grossly inebriated, are more concerned about the real risk of salmonella than the unlikely risk that halal certification is funding terrorism.

While it’s correct to say that we don’t know where the money from halal certification is going, we don’t really know where any of our spending on goods or services is going — but then, we don’t need to. 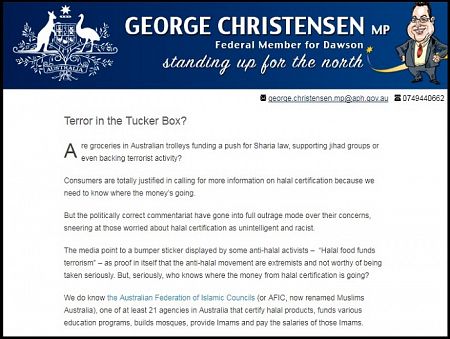 Enter AUSTRAC, the Australian Transactions Report and Analysis Centre, which is “kind of a big deal.” It’s unclear whether Christensen has heard of AUSTRAC, but for his benefit I ought to explain that AUSTRAC is Australia’s financial intelligence agency, with regulatory responsibility for anti-money laundering and counter-terrorism financing. So, whether you’re buying Doctor Who DVD box sets online, or charging a relaxing evening in the "Red Turbo Spa Room" to your Health Services Union credit card, rest assured, AUSTRAC will determine if those funds are going towards money-laundering or terrorism funding and take action to keep Australia safe.

Christensen also makes the nonsensical claim that Australian businesses are “pressured” to sign up for halal certification. On the contrary, with halal certification comes the opportunity to sell your products to larger local and international markets, hire more staff, increase your profitability, drive a better car, send your kids to a better school and, generally, have a better life than the one you’re having; few would need any “pressure” to sign up for that. It’s simply inconceivable that businesses would consider halal certification if they didn’t anticipate an increase in sales, over and above the certification cost. For politicians like Christensen, whose handsome pay cheques arrive on time and with no discernible connection to their performance, it’s unsurprising they know so little about the basic fundamentals of business.

But the greatest lie we’ve been told, is that halal certification is a “religious tax” which increases the price of consumer goods. Let’s consider, for example, a tub of halal-certified tiramisu at Coles Supermarkets — let’s call it "terrormisu". If we accept that the incidental cost of halal certification results in increased sales of terrormisu in local and international markets, then Coles would have more money to invest in its systems and processes, such as technology and supply chain.  With the need to then purchase larger quantities of inputs, Coles then has the bargaining power to reduce its average input costs. And what do you think happens to the price of our tub of terrormisu? That’s right, “down, down, the prices go down.” So, if halal-certification reduces the price of consumer goods, if anything, it’s more like a “religious tax refund” than a religious tax.

The most disconcerting aspect of Christensen’s campaign is that he himself does not believe that halal certification funds terrorism. He even tells us so, admitting 'it’s not terrorism'.

Yet, while Christensen is happy for an anti-halal campaign to erode the bottom line of Australian businesses, it’s okay for him spend his government salary on stomach surgery in Malaysia, a country whose majority population supports Sharia. That money should have been spent in Australia to support Australian doctors. Using Christensen’s own distorted logic, his stomach now supports Sharia. Now, I’m reliably informed of an objectively identifiable state of being, known as "hangry" — a feeling of anger precipitated by hunger. If Christensen’s stomach, which now supports Sharia, causes him to be "hangry" in parliament, he himself could be supporting Sharia in his political decision-making. God help us!

So, the next time you worry that ‘Vege-mite be funding terrorism,’ please take a moment to remind yourself that we already know this to be untrue, and let’s ensure we continue to support all Australian businesses.

Gamini Jayasinghe is a Melbourne lawyer who blogs at The Artful Advocate. You can follow him on Twitter @Artful_Advocate.

25 August 2017, 8:00am The most disconcerting aspect of George Christensen’s anti-halal campaign is that ...