But as this is also accompanied by the whiff of bedroom antics – her long association with ex-Wagga Wagga Liberal MP Daryl Maguire, described as a “close personal relationship” – another dimension has come into play. Maguire is currently being investigated by the State’s Independent Commission Against Corruption (ICAC).

As ABC's Annabel Crabb described it, the whole saga 'became an instant Goggleboxer, with hot takes ranging from "Leave Gladys alone, who hasn’t kissed a frog?" all the way through to "Lock her up".'

On October 12, the Premier revealed under questioning at ICAC that she and Maguire had been partners since 2015. The period covered his tumultuous 2018 exit from the NSW State Parliament after Maguire admitted to another ICAC investigation that he had sought payment for helping broker a deal with a Chinese property developer. Since then, ICAC has renewed its interest in Maguire, notably over his efforts to clear a $1.5 million debt of which the Premier resolutely claimed to be ignorant.

Berejiklian is short of options, but one has come to the fore with radiance. Before ICAC, she played the personal card, otherwise known as the bloody fool’s defence. In telling the commission she had concluded her association with Maguire in August, she admitted to having “stuffed up in my personal life”. The relationship with the former MP had been a “mistake”.

But then came the compartmentalising as Berejiklian said: "I haven’t done anything wrong.” Had she done so, she "would be the first one to consider” her position. “But I haven’t."

In a press conference following her ICAC appearance, Berejiklian reiterated this dubious proposition — that her life as a holder of public office, held in trust for the state electorate, could somehow be hermetically sealed from the impropriety of a person already found to be corrupt. As far a reading of power goes, this is both amateurish and risible.

“Had I known then what I do now, clearly I would not have made those personal decisions that I did… I feel really, really let down.”

As for resigning? “Never, ever have I done anything but what is the highest standard of integrity. Where I have failed is in my personal life.”

Unfortunately for Berejiklian, she risks either looking complicit or naively incompetent. The latter would be problematic, as her backers repeatedly make the claim she is one of Australia’s more competent politicians, brimming with integrity.

During the course of the week, ICAC has been drawing a treasure trove of admissions from Maguire. He admitted to using his Parliament house for personal business matters; confessed to pursuing those business affairs with tax-payer funded staff, email and facilities, and to running a scheme securing Australian visas for Chinese nationals. Personal profits were also made through his directorship of a company called G8way International.

The Premier’s ignorance of Maguire’s shady conduct was also shown to be less than golden. Phone conversation intercepts played at the inquiry reveal Maguire describing his $1.5 million debt problem, along with his broader business affairs, with the Premier.

“I don’t need to know about that.”

Berejiklian was one of the few, he also assured ICAC, he could confide in. Such confidence was evidently such as to puncture any claimed wall separating the two. In 2017, a “drop-in” was organised between property developer Joseph Alpha and Berejikilian by Maguire. 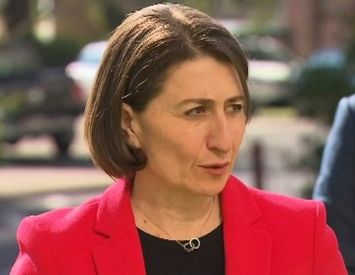 Defenders of the Premier have chosen to dodge the issue of proximity and power. Federal Home Affairs Minister Peter Dutton preferred to focus on something he is unaccustomed to. “I don’t think you could find anybody more honourable or decent than Gladys Berejiklian,” he suggested to the Nine Network. Federal Employment Minister Michaelia Cash admired Berejiklian’s candour: “Gladys Berejiklian has been upfront.”

There were also fox hole types assuming that gender is what this is all about, and that stupid decisions supply creditable capital for exoneration. If men are monstrous and reach positions of power, and are even celebrated for doing so, why should such a personal faux pas trouble anyone, especially a competent woman? Broadcaster Julia Baird was surprised by “the enormous sympathy” for the Premier and “the number of women who threw their hands up in the air and said: ‘Je suis Gladys!’ Who hasn’t dated a tool?”

Columnist for the Australian Financial Review Parnell Palme McGuinness even went so far as to give Berejiklian a clean bill of health on the ABC’s The Drum:

“I can accept the idea of a woman listening to a whole lot of bullshit and dismissing it as ‘Oh well, it’s just him crapping on again’.”

Never mind that the person in question is an elected official and Premier of Australia’s most populous state. This obvious question is never asked, raising the troubling spectre that gender might actually excuse some conduct — the very thing that men are often accused of exploiting.

Emma Alberici, who has been torched with vicious enthusiasm for her own journalistic forays into economics and finance when working for the ABC, might have been lingering in a land of haloed reflection. Instead, she decided to mount her steed and defend Berejiklian with clamorous enthusiasm, making some wonder why she would die on this hill. One statement is almost foolish for its inaccuracy. “When was the last time or any time a man in power got hounded this much, was called to resign no less on account of a poor relationship choice?” she asks. 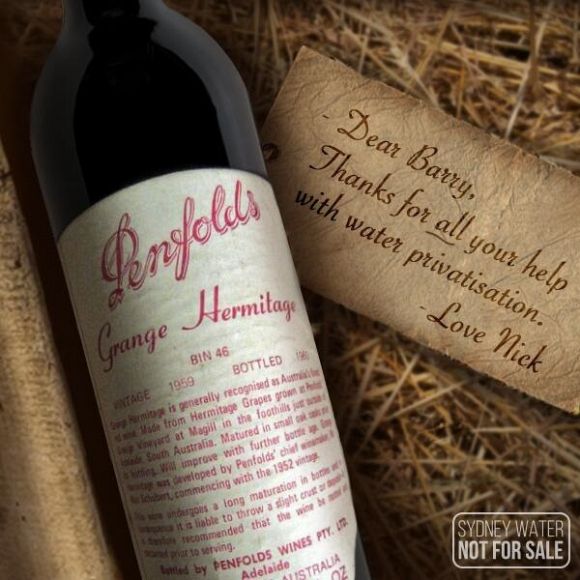 Barry O'Farrell was rolled out of the NSW premiership today, yet according to his colleagues he was more honest than Gandhi and his Government as pure as driven snow. Peter Wicks from Wixxyleaks corrects the record.

She obviously forgets that some men have actually resigned for a lot less and certainly in the state of NSW, conceding to a moment of utter stupidity. Barry O’Farrell did so in 2014 as NSW Premier after receiving a $3,000 bottle of Penfolds Grange from Australian Water Holdings executive Nick Di Girolamo. As O’Farrell subsequently explained, “I do accept there is a thank you note [to Di Girolamo] signed by me and as someone who believes in accountability, in responsibility, I accept the consequences of my action.”

According to Annabel Crabb, New South Wales politics is a curious sewer, a place where you are permitted

“...to run aside hustles as an MP. As long as you disclose them. The guidelines go so far as to insist that ‘Engagement to provide a service involving use of a member’s position’ be declared, alongside the usual requirements for declaration of organisational membership, debts, general paid work and so on.”

But even for Crabb, the “blinded by love” defence from the Premier has been rendered weak by those damning telephone transcripts and even “insulting to her personal intelligence and personal agency".

The question we should be asking is not whether a premier should be allowed to make personal mistakes in the friends she keeps, but whether those mistakes have any impact, actual or otherwise, on the office she occupies.

18 June 2022, 12:00pm The United States remains a country of tenacious faith, including in the sanctity ...
Join the conversation
comments powered by Disqus
News updates