Gaily Bolting into the White Nile 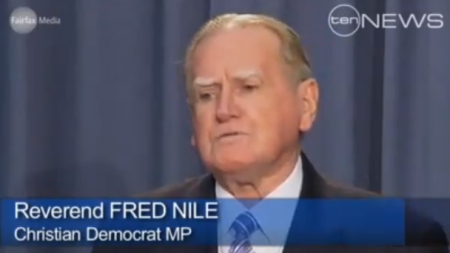 THE Christian right has called on bible-bashing homophobe Fred Nile to lead a push to have a referendum on gay marriage.

And they don’t want any old referendum, no siree… They want an ambiguous John Howard / Tony Abbott style unwinnable republic type referendum. Millions of republican supporting Australians will remember how their cause was done like a dog’s dinner by the lying John Howard and the not much better Tony Abbott on that important matter.

Fred wants a “black and white” choice on whether to allow “homosexuals to get married” — none of this “marriage equality” nonsense.

He says he believes the majority of Australians would vote no if the question was clear.

Nile’s Christianity is something like Abbott’s, although it has to he said these days Abbott is less strident than his attitudes of yesteryear.

Nile is deep in the camp of arch-monarchist David Flint and, without stating the obvious, we must wonder how Flint can sit easily with the gay hating Nile.

There seems to be a touch of hypocrisy about the Reverend Fred — after all he had to explain why his Parliament house computer started spewing out gay videos.

Fred had a ready answer, which bent along the following lines: his staff did inspect gay sites but only to gauge what was available on the web.

Did the Reverend have a peek too?

It seems Nile and the Australian “Christian” Lobby is prepared to divide and polarize the nation over gay marriage.

The Murdoch press is on a war footing in the lead up to the September election.

Melbourne’s Herald Sun, Sydney’s Daily Telegraph and the national broadsheet, The Australian, have become PR outlets for the Liberal Party, and the lies and hyperbole which pollute their pages have no peer.

Readers will remember the three journals are owned and controlled by the American citizen Rupert Murdoch, who was forced to close the most disgusting of his newspapers, England’s News of the World.

Now, one the group’s leading writers is the certifiably racist Andrew Bolt, who has problems with light skinned Aboriginal people — well, all Aboriginals, if it comes to that.

There are no grades of racism — if it’s not white, Bolt is dismissive.

It’s a pity he isn’t as benign with his treatment of Muslims, whom he holds in contempt and seems to fear.

He shows them no mercy.

Now Bolt is a good writer; the problem is he writes such crazy crap.

Within minutes of the tragic end of the famous Boston Marathon, Bolt was in full flight and he let go with all guns blazing.

Let’s see how he started his rant, under the banner ‘A Dangerous Silence’.

OUR media behaved politely after the Boston bombing. None jumped to the correct conclusion: these terrorists were yet again Muslim.

In fact, even after brothers Tamerlan and Dzhokhar Tsarnaev were identified and found to be - surprise! - Muslim, some still pretended not to notice or think it relevant.

He then goes on an unprofessional rant, bagging mercilessly the ABC and Fairfax Media.

He even bothered to count the number of words the stories used when the M word was not mentioned.

Now the ABC’s Media Watch does this type of program very well indeed — and the question needs to be asked: who the hell does Bolt think he is?

God forbid he should ever have access to Parliamentary Privilege — although the Liberals are always asking him to seek pre-selection.

If the rumors of the size of his massive salary are true, he’d be a fool to take the pittance we offer our parliamentary representatives

Bolt has every right to express his usually hideous views, but surely he should remember that his continuous pillorying of Muslims and Aboriginals is dividing the community needlessly.