As the international refugee crisis worsens, Australia needs to do more to make the situation better and not worse, writes John Haly.

DETERRING AND IMPRISONING asylum seekers is gaining popularity in the western world. Punishment by separation of children from parents now has occurred in both Australia and America, historically and currently, invoking community backlash. America forthwith will follow Australia’s indefinite detention practices, even as Trump repudiates his policy on separation of children from parents. These practices contravene the Refugee Convention to which both America and Australia were signatories.

Dutton emphasised the desire to be rid of this troublesome convention, saying:

“I think there is a need for like-minded countries to look at whether a convention designed decades ago is relevant today.”

Let us examine that which underpins our history of refugee conventions versus “deterrence” against refugees and their smugglers.

Nowadays, our country is one in which even North Korea can legitimately accuse us of human rights abuses. Some refugees have also died within our offshore gulags and, in America, deaths have already featured in Trump’s “zero-tolerance” regime. I want first to outline some historical legal cases which illustrate how international courts have responded to the idea of subordinating human rights to achieve political ends.

Dear America, we can teach you a few things about cruelty to refugees. Love, Australia | Brigid Delaney https://t.co/dFIfSNRZ4j

Following the days from 1970 to 1977, clashes between the Red Army Faction (RAF) and the Germn authorities culminated in the “German Autumn”, and the kidnapping and murder of industrialist Hanns Martin Schleyer.

Bret Walker delivered a speech to the annual Dinner of the Civil Liberties Society on Friday, 24 November 2017, in Sydney, in which he described the events of the German Autumn. The Germans had resisted the kidnapper’s demands. Schleyer’s son after failing to pay the ransom privately in part due to both inadvertent publicity and the German Government’s reluctance then sued the Government in an attempt to save his father. The principle invoked was the invariable nature of human dignity by which he called on the Government to make an effort to save his father’s life. The specific implication was that nobody should use another as a hostage, as an instrument or means, to achieve a demand or end. The court rejected the son’s claim in less than a day and, within days, his father was killed.

In 2006, the Constitutional Court in Karlsruhe received a complaint from flight crew staff about the decision that the government had justification in shooting down aircraft held hostage in the air under the ironically named Aviation Security Act. The Bundesverfassungsgericht declared that legislation which would have allowed the German Air Force to shoot down hijacked passenger planes was unconstitutional and, as a counterproposal, reinforced the constitutional right to life and human dignity.

In reviewing the decision, the Court would not accept the Government’s argument that the passengers were very probably soon to die anyhow. They instead held to another principle: that the State could not reduce passengers and crew to the status of “objects” they can kill at their leisure, no matter the amount of time the people may or may not have left to live.

The Court held, essentially, that human life should not be used as a bargaining chip or as instruments to achieve an end of preventing the possibility of further deaths. Presuming that one would then be as guilty of the Machiavellian principle that the “ends justify the means”, which is, of itself, the ploy of hostage taking.

Machiavelli versus the Golden Rule

Bret Walker espoused the principle that one should “do as you would have you and everybody else done by”. To extend this principle, the welfare and dignity of people is an end, but never a means by which you should cause one person or group to suffer to produce some advantage for others.

Instead, an alternate approach has been pursued with vigour and enthusiasm by recent immigration ministers, Scott Morrison and Peter Dutton. Successive Australian governments have created policies, legislation and facilities deliberately designed to mistreat and hold refugees and asylum seekers in conditions that we would not subject criminals in our internal national incarceration system. All designed and executed for the declared purpose of “deterrence.” 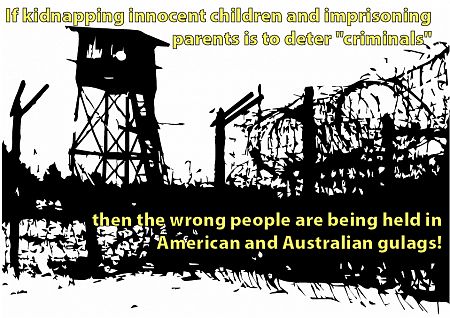 Under criminal law, the idea of “deterrence” is to sentence a legally convicted person in a such a way as to deter others from committing such crime. What is not part of the principle is the notion of taking people who are not guilty of a crime and have not been convicted of having acted criminally and visiting upon them adversity and punishments to deter and modify other people’s conduct. That is abuse to use innocents as a means and abrogate their human dignity as an end.

Other democracies handle refugees far more efficiently and with less abuse than we do. But this perversion of law, criminality, morality and deterrence did not merely begin here with the likes of Howard, Ruddock, Morrison and Dutton. In fact, they have refined the “art” of this deliberate moral bankruptcy which began with far humbler utterances from the lips of Labor politicians.

While Keating is often attributed with the “queue jumping” rhetoric, the source of this phrase came from Immigration Minister Michael MacKellar in a 1977 Radio Australia broadcast. While Malcolm Fraser was attempting to placate the fears that hordes of Vietnamese “boat people” were descending on Australia, the Labor Party was busily trying to capitalise on fears about this “unchecked invasion”.

Bob Hawke and Paul Keating continued Labor’s negative attitudes towards refugees when they used mandatory detention of asylum seekers for Cambodian refugees. The Government tried in vain to exclude these asylum seekers from seeking justice in the courts. The maximum period of detention in the Migration Act of 273 days was removed in 1994, paving the way for the era of indefinite mandatory detention.

Similarly, Trump’s executive order on 20 June – presumed to be reuniting families – seeks indefinite detention of families as a challenge to a 1997 law that limited immigration detention to 20 days (see Flores v. Reno). 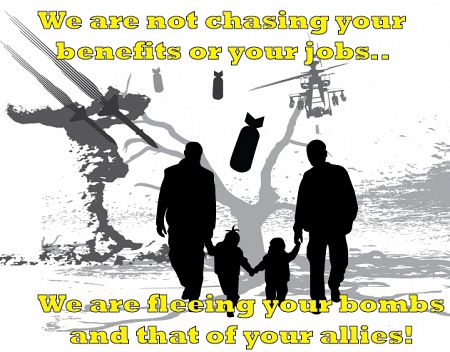 The success of Pauline Hanson’s racism in 1996 and the rhetoric of Phillip Ruddock in treating refugees not just as “queue jumpers”, but as evil, cunning manipulators of peoples sympathy marked a change in Australian attitudes (pg 31). The patent absurdity of these myths and arguments that traumatised people fleeing for their lives – often with children – were even capable of such manipulation, was surprisingly and naively accepted by the public.

John Howard went on to leverage refugees to acquire political power, which he did as a boat named the Tampa approached Australia, falsely crying “illegal immigrants” to reframe the public debate. Despite that, these refugees go on to be highly productive members of our community.

The Pacific Solution followed in 2001, as Howard opened offshore gulags on Christmas Island, Manus Island, and Nauru. Kevin Rudd would close them down, Julia Gillard would reopen them and Tony Abbott would massively escalate offshore detention. Malcolm Turnbull would allow Morrison and Dutton to leverage legislative control of these gulags. The relish with which Dutton justifies the Government’s “deterrence” on Manus, as even the vaguest sense of decency would suggest, ought to be expressed under the pretence of regret. 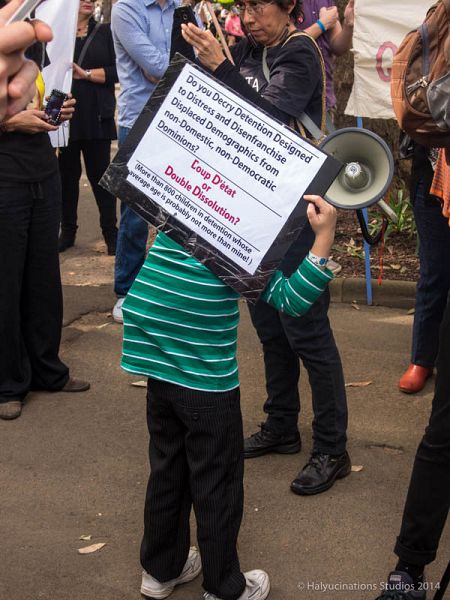 It’s not that complex to support children (Image supplied)

If we did, in any honesty, believe that preventing children and adults “drowning at sea” was a moral imperative, then we would be doing what is being done privately in the Mediterranean Sea and rescuing them. We would be at the U.N. addressing the veto factor or refusing to engage in the bombing of overseas middle-eastern targets, which create push factors that generate asylum seekers.

The notion of taking human beings hostage to achieve an end, to stop the boats and prevent deaths at sea, is comparable to the tactics of aircraft hostage-takers in the 1970s. Claims of having stopped the boats have turned out to be exaggerations or spin. Boats filled with refugees seeking asylum are still “setting sail” to come to Australia as recently as last month. The illusion, however, created and maintained by the Government’s response is to either intercept the boats, pay off the “captains” to turn the boat around, or simply to declare that successful arrivals – when they do arrive – don’t count as “arrivals”.

The end does not justify the means 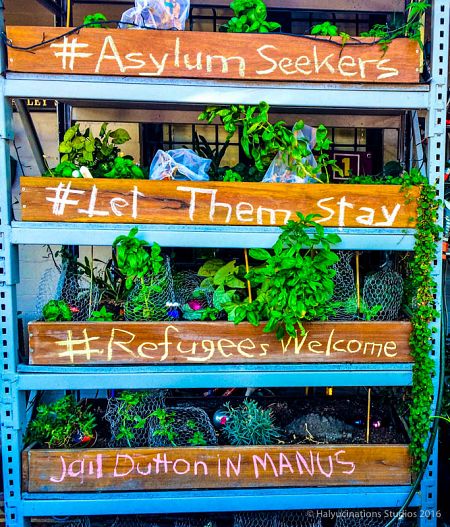 The end is not justified by whatever means are applied to achieve it. Instead, it’s the acts of compassion that define a civilised society, when they are brought to bear as the means to address an issue and achieve a goal with justice. And that, Mr Peter Dutton, Mr Malcolm Turnbull, Mr Jeff Sessions and Mr Donald Trump, is something which benefits all members of a community, old and new, and which has never become outdated.

"Stop the Boats🚣‍!" Had it been the rallying cry of Aborigines when the original boat people came ashore at La Peruse but then a "sailing ship" may not be defined as a "boat", and how boats and #AsylumSeekers are defined, determines if boats are coming to our shores at all. pic.twitter.com/k7JPg6PulR