KNOW YOUR ENEMY — DIGGERS VERSUS THE GILLARD GOVERNMENT 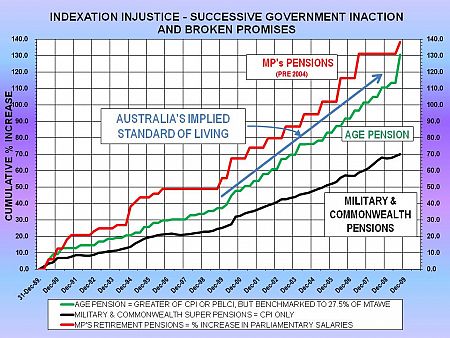 
"It is a complete mockery for members of our Parliament to attend the funerals of our young warriors who have been killed in action, and to observe a minute's silence in the House of Representatives and in the Senate and yet you reject a Bill which would have aligned the increases...with our old age pensioners.


"It has come to my notice that you may have voted in the negative recently on a motion, supported by the "peoples" house against the above bill (Fair Indexation Bill).


"In 30 years as a member of the Labor Party, I continually found greed, corruption, self-interest, branch stacking and elected representatives who often scoffed at the plight of their constituents.

EXCLUSIVE: Yet another assault allegation emerges against George Pell

17 January 2020, 9:00am The real reason Scott Morrison cancelled his Hawaii trip was to postpone a secret ...
Join the conversation
comments powered by Disqus
Daily news
Get FREE daily updates from IA to your inbox.
Just in
SHOP AT IA

IA is dedicated to providing fearless, independent journalism, free for all, with no barriers. But we need your help. To keep us speaking truth to power, please consider donating to IA today - even a dollar will make a huge difference - or subscribe and receive all the benefits of membership. Keep â€˜em honest. Support IA.