Among other deceptions, Deputy Leader of the Victorian Liberal Party David Southwick has been sprung using his staffers in promotional videos as "local constituents" who claim they'd back him, writes Megan Jane de Paulo.

THE ELECTORATE of Caulfield, an inner South East area of Melbourne has been held by a conservative representative since it was created in 1927.

David Southwick, bender of truth and acquaintance of chopping-board flingers (see Herald Sun article,'Far-Right personality pleads guilty to assault'), has been the Caulfield Member since 2010. In a talent pool shallower than the toddlers’ section of the Carnegie Swim Centre, he was selected as Deputy Leader of the Victorian Liberal Party last year.

Standing against hate, but standing with a Wife Beater pic.twitter.com/lrLNbn3tOj

Caulfield is now a marginal seat, a tightrope straddling Liberal and Labor, with a Teal Independent candidate sawing the rope at one end and a Greens candidate filing away at the other.

Following the redistribution, Labor has been put slightly ahead at a margin of 0.2 per cent. But it should not be dismissed that much of this area only last May in the Federal Election, got behind Zoe Daniel, an Independent Teal candidate, ending the Liberal reign in Goldstein.

Surrounded on all sides and with a 12-year history as the Member for Caulfield, unsullied by any major achievements, one could perhaps even forgive some muddying of reality by a man desperate not to pack up his office and give up that generous paycheck and benefits. However, our Member for Caulfield has a history of distorting the truth to suit himself. 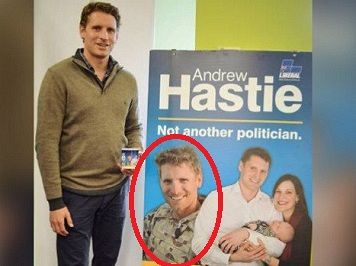 What is it with rightwing politicians claiming endorsements they simply don’t have? Managing editor Dave Donovan looks at three recent examples.

In November 2012, The Age ('MP sorry for padding his resume') reported that David Southwick had claimed to have been an adjunct professor at RMIT – denied by RMIT – and had completed a postgraduate diploma in marketing at Monash University. However, Monash University says he never graduated. The “professor” removed these claims from his website and apologised when the truth came to light.

This week The Guardian ('"Meet Daniel": Victorian Liberal deputy leader David Southwick uses party staffer in ads') commented about a couple of promotional videos that Southwick had approved — videos with local constituents claiming they’d be backing him. Except they neglected to clarify that the video subjects were actually Liberal staff members – in fact, working for David Southwick – rendering the videos nothing more worthy than campaign marketing fodder.

Once again caught out, Southwick had to scramble to make corrections.

It took the head of the Victorian Ambulance Union questioning the legality of using a vintage ambulance in a stunt to halt the juvenile "Ditch Dan" ambulance shenanigans — but not before Southwick had been captured posing around it, exhorting his claims of an unfulfilled promise of ICU beds. Understandably, in these times, using an ambulance – vintage or not – could cause confusion.

I am the administrator of a Facebook community group (at the time we had 700 members, although it’s now over 2,000). Not an especially busy group: waste removal, local issues and reuniting lost cats and dogs – and particularly chickens – are the main topics of discussion. I started declining David Southwick’s post submissions since, in my opinion, they were contra to the Federal Government’s edicts at the time, even titled 'The Alternate Roadmap to Recovery'.

Oddly, the same posts I’d declined were then submitted by Southwick's son and one of his son's friends — again I declined these submissions to the group.

Then, random new members, invited to the group by Southwick's son and co, began submitting the same posts. I declined these posts as well.

But my curiosity was piqued by this unusual behaviour. Using simple searches, I found the true identities of the people in the member pictures and contacted them to let them know their identities had been used elsewhere. I reported this fraudulent activity to Facebook. I talked to administrators of other groups and found that these fake users had also commented on their posts, always portraying David Southwick in a positive light.

It was a widespread attempt – whoever was behind it – to promote Southwick and hoodwink locals into believing these were real people with genuine opinions, which of course they were not. Rather, propaganda-spouting fake accounts. It’s known as "astroturfing" and it’s exceptionally unsavoury.

Southwick wasn’t taking on a major publication or an educational institution, though. Just one of his constituents. I encouraged him to apologise or provide supporting evidence so the Facebook issue could be solved.

Instead, he threatened me privately and publicly on Twitter with defamation.

I’d posted extensive evidence of the misleading impersonations and activity on Twitter in 2020 and his threats of defamation – like lost chickens – came to nought.

It’s election time in Victoria and the corflutes have spontaneously sprouted to adorn the gardens and fences of constituents.

Curiously, Southwick’s corflute sign – unlike those of most Liberal Party candidates – doesn’t feature a Liberal Party logo (or even the word “Liberal” in an easily legible font). Despite being Deputy Leader of the Victorian Liberal Party, it's almost as if Southwick's embarrassed to be associated with it.

One could argue that he’s lurked around long enough for us to know who he is — but Dan Andrews is arguably more recognisable and he, helpfully, has Victorian Labor logos splashed all over his campaign bus.

The truth for David Southwick, it seems, is as elusive as a lost silkie chook in Elsternwick.

13 November 2022, 8:00am Among other deceptions, Deputy Leader of the Victorian Liberal Party David South ...

19 June 2022, 1:00pm Seven months into her journey with anorexia, a single parent talks about her uphill ...
Join the conversation
comments powered by Disqus
News updates