IA court reporter Umberto Ledfooti offers the only thorough account you’ll read of the Craig Thomson trial, breaking through the inevitable old media smoke and mirrors that accompany every hearing.

Late yesterday afternoon in the Craig Thomson trial before Magistrate Charlie Rozencwajg at Melbourne Magistrates’ Court, Lesley Taylor SC for the Crown announced the prosecution planned to call 17 more witnesses during the course of the trial.

Ms Taylor and Greg James, QC, representing Craig Thomson, had diligently worked together to address Magistrate Rozencwajg’s concerns, which meant that another 50 witnesses would not need to be heard.

Earlier in the day, the magistrate had expressed his displeasure about court time being taken to sort out the matter of prosecution witnesses, especially if the number of witnesses to appear would only be known to the court on a day by day basis.

It seems to this writer that this trial is becoming a frustrating experience for everyone involved with it — not only for Craig Thomson and his counsel, Greg James, QC, and not only for the magistrate.

From where this writer sits, prosecutor Lesley Taylor SC is diligently doing her duty-bound very best with a matter handed to her that, despite breathless media reporting to this effect, lacks the appearance of being an open-and-shut case having the proverbial smoking gun in evidence; some may find prosecuting a matter like this a worthy challenge, but many would find it most frustrating.

Many of the media reports on Monday said that sex workers were likely to appear yesterday (Tuesday) as prosecution witnesses.

But, unsurprisingly to this writer, this never eventuated — which makes the ABC’s look rather silly after first making these wild, now-redacted claims. 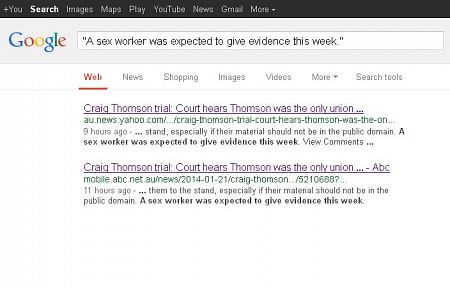 As you can see from the screenshot, they have been forced to backpedal.

However, as first order of business yesterday morning, Ms Taylor told the court that the two witnesses who would appear today were the HSU’s bookkeepers at the time of the alleged offences.

Ms Ord’s responsibilities included doing the payroll and bookkeeping for the National Office of the HSU. She told the court how MYOB was used as the HSU National Office’s main accounting tool, supplemented by Microsoft Excel for vehicle FBT reporting. According to her, no manual account books were kept. Ms Ord was aware that Mr Thomson held both a Diners Club card and a Commonwealth Bank Mastercard, but was uncertain if other HSU officials also had two credit cards at the time.

When instances arose where the Union’s cash was spent, or when receipts could not be provided for credit card transactions, Ms Ord stated it was the custom for each card holder to sign a memorandum statement stating that the money was spent on Union business. Ms Ord testified that the statements were then paid and finally filed in a folder which she kept in her office.

The prosecution then asked Ms Ord to examine one such memorandum document from 2005, identified as Number 6449, which was entered into the prosecution’s evidence as Exhibit 5. Ms Ord duly noted ‒ and testified ‒ that the words ‘Internat Immobiliare’ were handwritten on this document. She stated categorically to the court that it was not her handwriting.

Ms Ord also stated categorically that she did not know whose handwriting it was on this memorandum. Ms Taylor then hinted that the prosecution anticipated presenting a forensic handwriting expert as another witness.

Channel Nine later made an application to photograph Exhibit 5.

The magistrate suggested ‒ and counsel unanimously agreed ‒ that the media could be given photocopies of Exhibit 5 instead of photographing it.

However, this didn’t stop the mainstream media misreporting that

In fact, the court was never told anything remotely like that.

Who actually did write ‘Internat Immobiliare’ on that memorandum?

As far as this writer is aware, the court has not yet been told.

‘Internat Immobiliare’ is a nom de plume for Boardroom Escorts in Sydney, which ‒ according to this writer’s notes ‒ appeared on Mr Thomson’s May 2005 Mastercard bill. Also according to those notes, ‘Internat Immobiliare’ is related to the charges numbered 17 and 18 on the old Victoria Police charge sheet of January 30, 2013 ‒ alleged offences under s82(1) of the Crimes Act 1958 (Vic) ‒ which allegedly took place in New South Wales.

But weren’t the alleged offenses without any direct Victorian component dismissed by the magistrate last year?

This writer’s recollection of that dismissal may be in error; otherwise, it is very difficult to understand the mainstream media’s obsessive fascination with this particular document. Unless, of course, they wanted to remind people that Mr Thomson has often stated how he was a member of a dysfunctional union having certain officials who sometimes used threats of framing opponents with allegations of using prostitutes to order to destroy them?

Back to the trial:

Ms Ord also stated that she was a party to teleconference meetings of the HSU’s Financial Committee and was occasionally asked questions by them. She would then research the files and provide answers to the committee’s queries.

Ms Ord also said she didn’t recall being told of any prohibition on the use of the cards for non-HSU purposes.

After this point, however, Ms Ord’s testimony then became rather confusing and, in the opinion of this writer, it did not appear that Ms Ord had reviewed her own written statement to the police before she took the witness stand.

Anyone who has been summoned to appear as a trial witness knows from their own experience that standing up in front of a crowd and being asked difficult questions by a barrister can be very nerve-fraying. It is also the best practice of counsel at trial to never ask any question of any witness at a trial for which counsel doesn’t already know the answer, or at least know what the answer from the witness should be. A witness who is unprepared can often get more and more nervous to the point where it becomes difficult for the court to establish what his or her evidence actually is, which makes the process frustrating for all concerned.

This turn of events prompted the magistrate to state later in the afternoon that a transcript would be made available to counsel to confirm what Ms Ord’s responses to questions placed to her in the witness stand actually were.

The prosecution next called Ms Nurten Ungen, who started as a receptionist and filled the position of the HSU’s administrative officer and then office manager until she resigned.

Ms Ungen clearly recalled that Craig Thomson held both a Commonwealth Bank Mastercard and a Diners Club credit card, and that the Union’s financial auditor, Ian Dick was aware that Mr Thomson had two cards. She also stated that she knew other HSU staff members also had credit cards.

Ms Ungen said she was not told of specific policies or practices regarding the use of credit cards, however she was told the card were only to be used for HSU-related expenses.

In cases where the card had been used for personal expenses, she testified that it was the HSU’s practice for the card holder to pay back any money accrued on the cards for non-HSU business. In fact, Ms Ungen recalled that had done so herself — when she had booked personal travel on her HSU-supplied credit card.

On the occasions where receipts could not be provided for expenditure, Ms Ungen testified that the card holder was required to give an explanation of the expense. She said she recalled that Craig Thomson did provide verbal explanations as to his cash expenses for HSU purposes when he could not provide receipts. Ms Ungen also confirmed she was in a position to do internet banking on behalf of the Union. 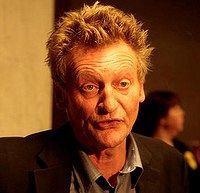 When the court returned at 2pm after breaking for lunch, Ms Taylor told the court that Jeff Jackson (pictured right) would be next prosecution witness to appear. She stated that he was obtaining independent legal advise about the operation of Section 128 of the Evidence Act 2008 (Vic) before he was sworn in as a witness, due to some of the evidence already heard by the court where he was named in relation to certain events and any questions he may be asked.

Shortly after Ms Taylor informed the court of this, Jackson entered the court without being called and he then took the stand.

Jeff Jackson, the former branch secretary of HSU #1 branch and former husband of Kathy Jackson, testified that he had met Craig Thomson sometime in the mid-1980s and that he was a member of the HSU National Executive until 2009.

He stated expressly that there was no policy in the National Office relating to the usage of HSU credit cards, that spousal travel had “never previously been questioned” to the best of his knowledge and the Union credit cards were to be used for HSU-related activities. He also testified that he had no knowledge of the role of cash advances, and he was never aware of the ability to use credit cards for cash withdrawals.

During an exchange between prosecution and defence counsel over the existence or otherwise of credit card usage formal policies and practices for HSU national office members, the magistrate noted that

“… the witness has said there is no formal policy.”

Mr James then stated that Jeff Jackson’s opinions of what the HSU’s rules are were of “no probative value” to the matters at trial, however the magistrate did not agree.

When the prosecution had concluded obtaining her evidence in chief from this witness by asking Mr Jackson about the role of the National Secretary in the HSU structure, Mr James had no questions for him, whereafter Mr Jackson stood down and proceedings in the matter essentially adjourned for the day.

The trial continues today when as Ms Taylor suggested, Kathy Jackson may take the stand.

Follow Umberto Ledfooti on Twitter @Uledfooti. Catch up on the full Jacksonville saga on IA by clicking here.

Craig Thomson trial day 3: Upon the admission of facts