Despite two humiliating defeats that week in August 2018, outwitted and entwined in a Machiavellian power play by Morrison and his supporters, Dutton remained in Cabinet, he retained the Home Affairs portfolio and dutifully supported the victor, then-Prime Minister Scott Morrison. In a later reshuffle, Dutton became Defence Minister and later, Leader of the House, who relished the Coalition habit of gagging debate.

Dutton’s political career has not been what you’d call "stellar" by any means; rather he has plodded along with the flat-footedness of a beat police officer.

His political career has been a veritable minefield of gaffes, distasteful comments and jokes bordering on offensive and racist dog-whistling, ill-informed comments, allegations of corrupt behaviour, and he’s been the enforcer of hardline policies that hardly endeared him to the Australian public.

After Morrison’s crushing defeat on May 21st, for some unknown reason, Dutton stood unopposed and was elected Leader of the Federal Liberal Party. Not one person in the Liberal Party room put their hand up for an 85 per cent increase to their parliamentary base salary for the privilege of being Leader.

Not one person wanted the opportunity to be the political nemesis of the newly elected Prime Minister Anthony Albanese, even though the entire party room had spent the previous six weeks on the campaign trail railing about how weak and ineffective Albanese would be. 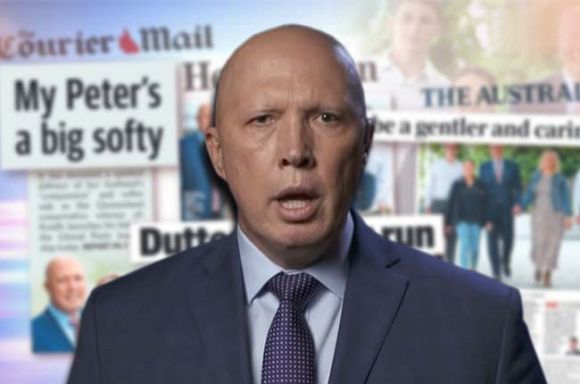 Peter Dutton has a history of cruelty and corruption, despite the mainstream media telling us we should give him a chance.

Surely, that would mean Albanese would be easy pickings, a sitting duck for anyone in that room with ambition? But only Dutton stood. That strikes me as rather odd given the vigour and imagination with which many in that room make their parliamentary expenses claims and list their pecuniary interests.

Dutton strutted into his first press conference with the confidence of a mediocre, middle-aged white man promoted beyond his ability and "a past" in politics that only a male can have. Women in politics don’t get the same privilege of being able to accumulate scandals and get to leadership positions.

Dutton then proceeded to tout his credentials to the gathered press, cherry-picking out of his political résumé, completely forgetting to mention au pairs, or proudly voting “no” in the same-sex marriage plebiscite and encouraging others to do so or walking out of the Apology to the Stolen Generations or blocking Indigenous names at bases. He didn’t mention anything about Kangaroo Island beach shacks.

The new Opposition Leader also neglected to mention the ad he did when he was a minister.

Almost immediately after becoming Leader, Dutton said he’d “made a mistake” when he walked out of the 2008 Apology:

"At the time, I believed that the apology should be given when the problems were resolved and the problems are not resolved."

That’s not what he said two years after the 2008 walkout, on ABC’s Q&A in 2010, Dutton remained firm in his position and called the Apology “a political distraction” and “a tokenistic gesture”. It was rather surprising when he abandoned those long-held beliefs on the day he became Leader of the Liberal Party.

Since that day, Dutton hasn’t exactly bolted out of the blocks with passion and excitement blazing a trail to inspire the nation. More of a flat-footed, gaffe-prone, lacklustre shuffle in keeping with the previous 20 years of his political career.

To be fair, after the razzle-dazzle spin-cycle of the snake-oil salesman Morrison, any successor was always going to pale by comparison. Morrison wanted to always be the centre of attention, Dutton doesn’t quite avoid it nor does he obsessively court it as his predecessor did.

Jetlagged from a trip to D.C., still having not landed a significant blow on the Government from the Opposition and bruised by a damning Home Affairs report, the first sitting week offered Dutton an opportunity to show the House of Representatives his stuff, the moment he’d waited for since the winter of 2018.

For his first political foray in the House of Representatives as Opposition Leader, Dutton chose to champion nuclear power and ignore expert advice on the Foot & Mouth Disease threat.

End of the first sitting week, Newspoll conducted its first poll since the May election.  Sunday evening brought horror poll results for the Coalition, with Labor leading 56-44 (two-party preferred) and preferred Prime Minister: Albanese 59 per cent to Dutton's 25.

To his credit, Dutton showed up to work on Monday. Colleagues would’ve forgiven him for chucking a sickie after that Newspoll.

The second sitting week was not unicorns and glitter for Dutton either. Bills passed and climate wars came within cooee of ending. Question time was an embarrassing collection of poorly constructed Opposition questions and oft-repeated, cringeworthy own-goal slogans that became the source of great mirth and merriment for viewers and those on the Government benches. 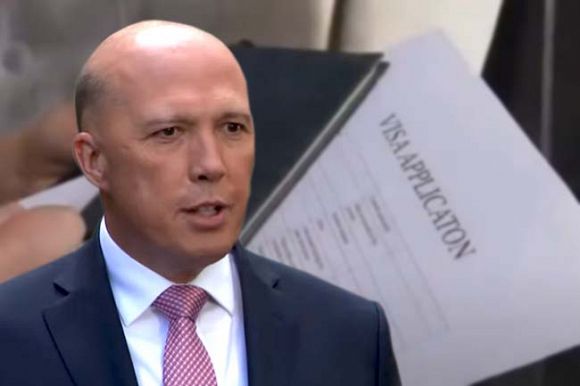 The Coalition Government left behind a cruel and complicated processing system for asylum seekers.

Over the entire fortnight, Dutton chose to hold the Government to account with only ten obscure questions in his first six question times: four questions were about the CFMMEU, one about the cashless debit card and five questions, bizarrely, about a Labor promise on energy that was about a year too early to prove if Labor had fulfilled its election promise.

It was the only time I’ve ever seen the Coalition ahead of the times.

At times, the Opposition Leader seemed to forget he was no longer Leader of the House and stood more than once to make a point of order on "relevance" to The Speaker, and in his haste, did not discriminate between Opposition questions and "Dorothy Dixers". The Leader of Opposition Business in the House, Paul Fletcher, spent most of question time ruffling through his little green book valiantly trying to keep up.

He seemed most aggrieved at the Government’s Dorothy Dixer and, through the Speaker, accused the Prime Minister of engaging in “…unstructured sledging of this side of the House”.

It’s almost as if the Leader of Opposition Business is discovering the Westminster system for the very first time, bless.

The Government did enjoy themselves indeed, perhaps more so the second of the two sitting weeks.

And to top matters off, an Australian Federal Police (AFP) letter former LNP MP for Dawson, George Christensen, had fought hard to keep secret for years was publicly released. The letter revealed the AFP wrote to Dutton on 25 June 2018 advising the then-Home Affairs Minister they had assessed, 'met with and informed' Christensen 'of the potential risk of compromise' he had exposed himself to on his extensive travels to South East Asia. The AFP said no criminal conduct was identified.

Dutton was "grilled" by Ray Hadley on the final sitting day, kudos to the digital author who came up with that little gem. Despite Hadley’s interview, Dutton forgot to mention that the AFP letter in June did not dissuade him from campaigning for Christensen.

Dutton told the good people of Townsville what a good bloke Christensen was four months after he got that AFP letter.

Finally, the fortnight was put to bed with the passing of the Government’s Climate Change Bill passing, Liberal MP Bridget Archer crossed the floor and the final result was 89 votes in favour and 55 against.

Other than that, everything’s going according to plan for the new Opposition Leader.

23 July 2022, 8:00am The recently released 'State of the Environment' report illustrates the mismanag ...