Could Malcolm Turnbull call an early election — and win?

Malcolm Turnbull must be tempted to call an early election.

Logistically, State elections in Victoria in November 2018 and in New South Wales in March 2019, plus the timing of school holidays over the next year, make an early election a possibility.

My guess is Turnbull will call the election after 2 July but before November. Why 2 July? Constitutionally, Turnbull can only call an election for half the Senate two years after the last election. He would want the half Senate election and the full House of Representatives election to happen at the same time.

One complication to this is that the Australian Electoral Commission is undertaking an ongoing Federal redistribution to adjust seats for population changes. Proposed new boundaries for South Australia, Victoria and the ACT have been announced, with an appeal process closing in May.

The AEC will complete these redistributions by mid-July. It is then they become set in stone. The proposed redistributions give three seats notionally to Labor (that is, more appropriately reflect the will of the Australian people).

If an election is called before mid-July, say on 2 July, then according to Damon Muller of the Politics and Public Administration Section of the Parliamentary Library, there would be a mini-redistribution for those states and territories. If that happened, it would be fairly arbitrary. 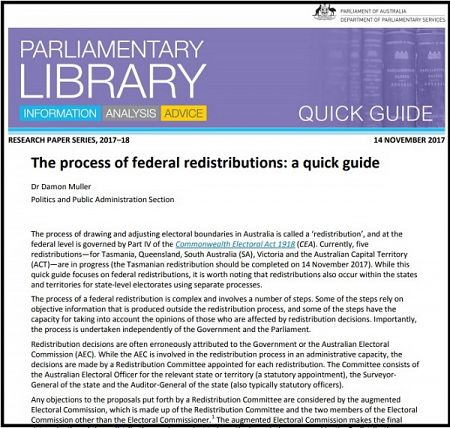 The deviousness of calling an election on or after 2 July, but before the proposed AEC redistributions come into effect, thus triggering the mandated mini-redistributions, plus the administrative burden, all for little electoral gain, rule such a Machiavellian manoeuvre out.

That means, if Turnbull wants to go early, he would call a House and half Senate election after mid-July when the AEC’s proposed redistributions are finalised. That could give us an August or September election.

The real question is whether, politically, Turnbull would risk going early and losing, or hang on for another year or so. The government’s 31st losing Newspoll in a row showed a tightening of the race. It gave Labor 51% of the two-party preferred vote compared to the Liberals and Nationals on 49%.

That tightening was due to a change in the Newspoll methodology. That change seems to have been from a 50/50 flow of one Nation preferences based on the last Federal election to 60/40 to the government, perhaps based on state election results. Newspoll has not told us.

Even then, it makes little difference. Using the old 50/50 split would have resulted in a 52/48 win for Labor.

In the forthcoming 9 May Budget, Scott Morrison will, despite denials, be Santa Claus and shower gifts on the voting public. Tax cuts for low to middle income earners – which, by the way, flow through to high income earners – will be part of that. The new lower tax rates are likely to start from 1 July, so an election soon after that would have this disguised return of bracket creep firmly in voters’ minds.

What better pea and thimble trick could there be than to return the increased tax we have already paid because of wage rises moving us over time into higher brackets?

The Government has scrapped the increase in the Medicare levy that was going to be used to fund the National Disability Insurance Scheme. This eliminates NDIS funding certainty, as Olympian Kurt Fearnley and the Disability Commissioner made clear in their opposition to the decision.

Paralympian and advocate @KurtFearnley says he doesn't care whether the funding comes from a levy, consolidated revenue or cuts, but the #NDIS needs certainty pic.twitter.com/SgcjLHoy8T

There will likely be other sweeteners. Suddenly health and education will appear to be important for this Government. In reality, the public education and school systems will still be massively underfunded, just, perhaps, a little less so.

The already generous child care changes begin on 1 July in an attempt by the Turnbull Government to buy off well to do young parents.

The Government, I suspect, will also try to buy off small business with more benefits, aged pensioners with minor increases, One Nation and other racists with beefed up terrorism and anti-immigration talk, make superficial changes to give the impression of lessening the cost of health insurance, power and so on and so on.

In the back of Turnbull’s mind must also be the fact that Dutton might begin to marshall the Abbott forces, so going early prevents a challenge.

Will Turnbull and Morrison continue with the proposed company tax cuts for large and medium sized companies? The bet is that they will recall the Senate before the Budget to try one last time to buy off some of the no-name senators and their more well-known accomplices to get the company tax cuts through.

Ironically, the Banking Royal Commission could prove to be a winner for this Government, if they act quickly to give the impression of doing something to stop the abuse. In a straight lift from the Orwellian Newspeak songbook, the Coalition is already claiming credit for the Royal Commission. Some people will believe them, despite the fact they  basically ran a protection racket for the banks for years.

This voter gullibility expresses a wider problem. Australian workers are divorced as workers from the political process. The fact the Turnbull government is only a few points behind Labor in the polls and could just possibly win the next election, shows the reality of the declassing of politics in Australia.

This is not about Bill Shorten’s personality, although he is certainly uninspiring.  It is about the low level of support Labor has as a consequence of the lack of class struggle by our side, coupled with the ALP being the alternative party of capitalism and our memory of it in power. Labor’s primary vote in the polls has been consistently in the mid to high 30s. It is currently 37%.

From all of these announcements (& they’re little more than talk) it’s clear LNP aiming for post budget sugar hit, a tightening #newspoll & a beholden on-side media to help them scrape though to win a 2018 election. The thought of another LNP term is terrifying #seatbelts #auspol

Labor has responded with a slight feint to the left — the Jeremy Corbyn you have when you are not having a Jeremy Corbyn. So, too, have the Greens — at least on social issues.

The ACTU is running a Change the Rules campaign — a campaign which is really about voting for Labor. Rather than mobilising workers as workers to break the rules to change the rules, it is really about voting for Labor to get a few industrial relations changes through. The grand ALP and Liberal architecture of making strikes illegal except in certain restrictive bargaining situations will continue.

If Labor and our unions won’t mobilise workers as workers to defeat the Turnbull reactionaries, maybe it is time we did it ourselves. That, in my view, is the only way to really make sure we smash this rotten Government and put in place one more receptive to our wishes as workers.